Dear Reader, we make this and other articles available for free online to serve those unable to afford or access the print edition of Monthly Review. If you read the magazine online and can afford a print subscription, we hope you will consider purchasing one. Please visit the MR store for subscription options. Thank you very much. —Eds.
by Howard Sherman and Paul Sherman
(Mar 01, 2012)

Howard Sherman (sherman [at] polisci.ucla.edu) is professor emeritus of Economics at U.C. Riverside, visiting scholar in Political Science at U.C.L.A., and a founding member of the Union for Radical Political Economics. He has published over twenty books and 150 articles, including The Roller Coaster Economy: Financial Crisis, Great Recession, and the Public Option. Paul Sherman (sherman [at] idiom.com) is a computer engineer in Silicon Valley with concerns for the problems of the people of the world. He has played an active role in the evolution of data storage technology for the past twenty-five years.

The National Bureau of Economic Research (NBER) decides the peak and trough dates of the business cycle. Most economists, including the government economists, accept their dates as the bible of research.

Their dates do accomplish what they set out to do: they reflect the highest and lowest levels of business activity. This was the definition set by the founder of the NBER and it is very useful for many purposes. Certainly, there is a major gain if all economists use the same dates.

Nevertheless, it is useful to ask a different question and use different dates for some purposes. Suppose we do not want to know the peaks and troughs of business activity, but instead we ask: How much human misery is caused by the cycle? There are many ways to answer that question, but the easiest is just to examine the duration of recessions in terms of human misery.

Unemployment rates reflect human misery a lot more directly than production levels. The only problem with using the unemployment rate as an indicator is that it goes up as business goes down and vice versa. It is easier to understand a rate that goes up with expansions and down with recessions.

Dating the cycle by the Employed Labor Rate leads to a cycle of longer duration than described by the NBER dates. This can be seen for the last three cycles in Chart 1. 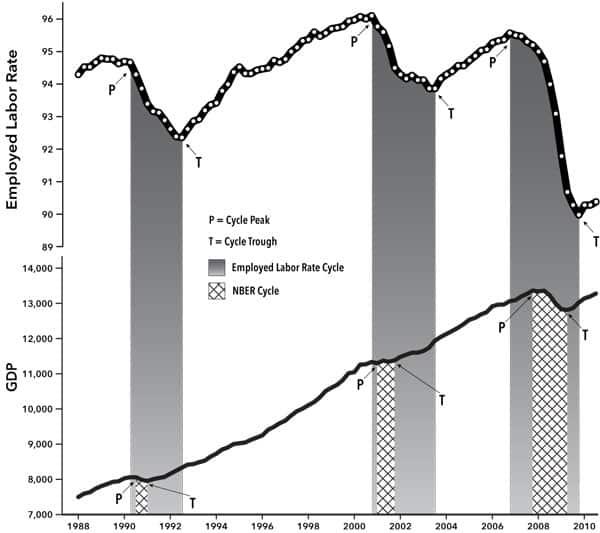 Dates According to Total Employment 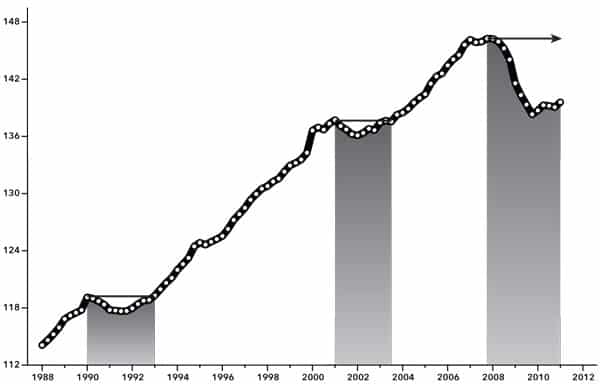 The recessions using total employment dates (the shaded areas in Chart 2) are longer than the recessions using NBER dates (the crosshatched areas under the lower line in Chart 1). This comparison shows that human misery is better represented by the popular definition of recession according to total employment rather than the recession according to the official dates given by the NBER. In other words, our conception of human misery here is illustrated by the length of time that fewer people, such as Joe and Sam and Mary, are working, compared to the previous peak number of employed people.

Duration of Recession by Decade

How much of each decade is spent under recession with increased human misery? Table 2 answers this question for the last two decades by showing the percentage of each decade spent in recession.

Second, if so much time was spent in recession, then it obviously lowered the growth rate of the economy an appreciable amount. Thus the comparatively low growth of the economy in the last decade is explained in part by the long time spent in recession and by the fact that the employment level was far below full employment. Of course, there were also other reasons, but the high unemployment rate is clearly one very important reason.

Human misery is better measured by either the Employed Labor Rate (reflection of unemployment) or total employment rather than the commonly used official dates of recessions. Second, one major cause of the low growth rate of the past decade was the large percentage of time spent in recessions and high unemployment. Thus the best way to reduce human misery and to increase the growth rate of the economy would be to achieve full employment.

View all posts by Howard Sherman →