Dear Reader, we make this and other articles available for free online to serve those unable to afford or access the print edition of Monthly Review. If you read the magazine online and can afford a print subscription, we hope you will consider purchasing one. Please visit the MR store for subscription options. Thank you very much. —Eds.
Notes from the Editors
by The Editors
(Apr 01, 2012)
Topics: Economic Crisis Economic Theory Political Economy 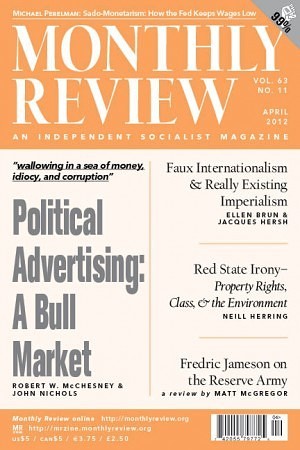 For decades we have been arguing in Monthly Review that stagnation is the normal state of the mature monopoly-capitalist economies. Today the reality of stagnation is increasingly gaining the attention of the corporate media itself. Thus the New York Times carried an article on February 9, 2012, entitled, “In Europe, Stagnation as a Way of Life,” describing European economic conditions as a “grinding reality” with seemingly no way out. Of course much the same could be said today of the U.S. and Japanese economies.

For those accustomed to thinking of the capitalist economy as either growing rapidly or occasionally falling into a severe crisis (from which it quickly bounces back), long-run stagnation is a difficult to understand phenomenon. As Gar Alperovitz (author of America Beyond Capitalism) notes in an interview on “Economic Alternatives to Capitalism” with Richard Wolff on February 21, 2012 (http://truthout.com), the present period of economic “stagnation and decay” signifies “an ongoing, long, painful process, rather than the classic crisis.” In other words, the economy neither collapses into a full (or “classic”) crisis, which would allow it to clear out (or devalue) its overaccumulated capital, nor is it able to achieve a full recovery. Instead, it remains caught in a stagnation trap, limping along at a low rate of growth, with high unemployment and excess capacity. Under the circumstances—and without the help of some external stimulus like a major war, a financial bubble, or an epoch-making innovation—the capital accumulation process is unable to move off dead center.

Chronic stagnation under mature capitalism usually leads to the systematic redistribution of income and wealth toward the rich, engineered by the state. For the capitalist class, the amassing of private riches is always the over-riding imperative. If this cannot be accomplished by appropriating the growth in wealth in the society as a whole, it will be accomplished by redistribution within society. Hence, the costs of slow growth are paid for primarily by those at the bottom of society—a process that has been institutionalized today under the form of a permanently entrenched policy of neoliberalism and financial dominance.

People everywhere are becoming conscious of the need for international solidarity in resisting these dire conditions of stagnation, financialization, and neoliberalism associated with the present age of monopoly-finance capital. Thus when the Greek parliament voted on February 12 for a barbaric European Union-directed austerity package for Greece that would cut the minimum wage by 22 percent, effectively abolish collective bargaining, and lead to more massive unemployment, the global response was immediate. Mass demonstrations took place on February 18 in cities throughout Europe and in the United States under the slogan “We Are All Greeks Now.” Along with the Occupy Movement and the world response to the Arab Spring, the “We Are All Greeks Now” declaration points to the rapid rise over the last two years of movements of global solidarity among working peoples.

Although such dramatic instances of international solidarity necessarily draw our attention, myriad grassroots struggles are erupting at the national and local levels. In the United States the biggest working-class protests in decades occurred last year in Wisconsin as a result of attacks on public sector unions and Red State/Tea Party-inspired austerity measures. In this regard, we are proud to announce the publication of a new Monthly Review Press book, Wisconsin Uprising: Labor Fights Back, edited by Michael Yates and containing contributions by many of the leading protagonists in this battle. An afterword by Yates connects the Wisconsin Uprising to the Occupy Wall Street struggle.

As part of the development of what will eventually be called MRonline we recently invited Ian Angus, founder and editor of the important Climate & Capitalism blog to join forces with us and to locate Climate and Capitalism on the MR website, with himself as editor. We are happy to announce that he agreed and the blog can be found on both the MR website and http://climateandcapitalism.com. In announcing the change on February 14, Angus wrote:

Climate and Capitalism is five years old this month. I’m excited to mark this anniversary by launching an alliance with Monthly Review, the world’s foremost independent socialist journal.The agreement will enable the two publications to share resources and expand the audience for our Marxist perspective on environmental issues.Since 1949, Monthly Review has made invaluable contributions to the fight against capitalism, imperialism, and the commodification of life. In the past decade, it has come to be widely recognized as an authoritative voice of ecological Marxism.

So I was deeply honored when MR editor John Bellamy Foster proposed that we join forces to make C&C’s unique coverage of the global fight against capitalist ecocide available through Monthly Review’s popular and growing website.

We would like to draw the attention of MR readers to the World Review of Political Economy (WRPE) a new quarterly, peer-reviewed academic journal devoted to Marxist political economy. Founded in 2010 by the World Association of Political Economy, an international nongovernmental academic organization based at the Shanghai University of Finance and Economics, WRPE is published in English by Pluto Journals in London. Enfu Cheng (professor, Shanghai University of Finance and Economics, and member, Chinese Academy of Social Science) is the journal’s editor. He is supported by three international coeditors: David M. Kotz (professor, University of Massachusetts, Amherst), Hiroshi Ohnishi (professor, Kyoto University), and Jean-Claude Delaunay (emeritus professor, University of Paris East-Marne la Vallée). The managing editor is Xiaoqin Ding (associate professor, Shanghai University of Finance and Economics). The editorial board of the journal includes a number of MR/MRzine authors including Riccardo Bellofiore, John Bellamy Foster, Makoto Itoh, and David Kotz. Brett Clark and Michael Perelman have both written for the journal. For more information on WRPE, visit http://plutojournals.com/wrpe.  For those interested in the World Association of Political Economy itself, it will be holding its seventh annual forum, “State, Market, the Public and Human Development in the 21st Century,” at Universidad Autónoma Metropolitana-Xoxhimilco, Mexico City on May 25–27, 2012.

The Bull Market
A Red Robin?