Dear Reader, we make this and other articles available for free online to serve those unable to afford or access the print edition of Monthly Review. If you read the magazine online and can afford a print subscription, we hope you will consider purchasing one. Please visit the MR store for subscription options. Thank you very much. —Eds.
Notes from the Editors
by The Editors
(Jul 01, 2012) 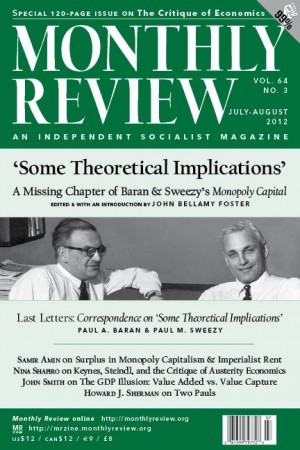 As the economies of Europe, North America, and Japan continue to stagnate orthodox economics has revealed itself to be bankrupt, unable to explain what is happening much less what to do about it. It was not the failure to see the “Crisis of 2008” coming that represents the economics profession’s biggest failure, Paul Krugman declared in a recent talk, but what came after: “the profession’s descent into uninformed quarreling,” coupled with its reversion to Say’s Law (the notion that supply creates its own demand)—the disproof of which was the main achievement of the Keynesian revolution. As a result, many among the more orthodox members of the economics profession have “now regressed 75 years” (“Economics in the Crisis,” March 5, 2012, http://krugman.blogs.nytimes.com). In another recent criticism of economic theory and policy, Michael Spence of New York University’s Stern School of Business suggests that the persistent failure to deal with growing inequality points to the possibility of “prolonged stagnation” (“Why Do Economies Stop Growing?,” Japan Times, May 28, 2012).

Yet neither Krugman nor Spence, nor any other prominent orthodox analyst, has sought to engage in a genuine overhaul of received economics on the level of what Keynes accomplished in the 1930s. Indeed, no such scientific revolution appears possible within mainstream economics today, which is characterized not by its realism but its irrealism—serving now an entirely ideological function. Here one is reminded of Paul Sweezy’s observation nearly fifty years ago: “Bourgeois economics, I fear, has irrevocably committed itself to what Marx called ‘the bad conscience and evil intent of apologetic.’ If I am right, Keynes may turn out to be its last great representative” (Sweezy, “Keynesian Economics: The First Quarter Century,” in Modern Capitalism and Other Essays [New York: Monthly Review Press, 1972], 88; originally published in 1963).

But if capitalist economics has proven itself incapable of rationally responding to the current malaise, two questions nonetheless remain to be answered: What is the general nature of the present crisis? And what does this tells us about the direction in which a critical political economy of capitalism should proceed? Noam Chomsky has offered a concise assessment of the current economic situation in an interview with Laura Flanders for Counterpunch:

Flanders: Let’s start with the big picture. How do you describe the situation we’re in, historically?

Chomsky: There is either a crisis or a return to the norm of stagnation. One view is the norm is stagnation and occasionally you get out of it. The other is that the norm is growth and occasionally you get into stagnation. You can debate that but it’s a period of close to global stagnation. In the major…capitalist economies, Europe and the US, it’s low growth and stagnation and a very sharp income differentiation, a shift—a striking shift—from production to financialization. The US and Europe are committing suicide in different ways. In Europe its austerity in the midst of recession and that’s guaranteed to be a disaster…. In the US, it’s essentially off-shoring production and financialization and getting rid of superfluous population through incarceration (“Talking With Chomsky,” Counterpunch, April 30, 2012, http://counterpunch.org).

Viewing the global economic problem in these realistic terms, the issue becomes: Why is stagnation the norm of advanced capitalism, and how have financialization, offshoring (the global labor arbitrage), and the national security state—internal as well as external—emerged as structural forces in this context? Further, how is all of this rooted in the historical process of capital accumulation that governs the system’s laws of motion? Our answer, in the briefest possible terms, is that these developments can all be traced to the rise of monopoly capital—today monopoly-finance capital—together with the interrelated conditions of industrial maturity in the center economies and imperial rent extracted from the periphery. We are now witnessing the development of the most exploitative and destructive patterns of resource utilization in all of history, undermining the productive structure of the capitalist economy and generating massive quantities of waste, which the population is systematically compelled to pay for, while billions suffer and the planet is rapidly being reduced to a condition no longer conducive to human habitation. At the global level we see the capture of more and more of the value generated in the periphery by the center economies of the imperialist system, undermining the possibility of truly sustainable development in the world at large. In what has become an increasingly retrograde system, hundreds of millions of people are simply designated as superfluous, literally of no account.

The intellectual default of modern economics is deep-seated. More than forty years ago, when it was already clear that the so-called “golden” Keynesian age would be short-lived, the question arose: After Keynes, what? (See Sweezy’s article cited above.) By that time the few among those officially certified as “economists” capable of pursuing economics with a critical perspective—that is, as a meaningful social science—were already marginalized. The “profession” as a whole had long since disappeared down the road of the “bad conscience and evil intent of apologetic.”  In the intervening decades its leading lights have justified every attack on the provision for social needs in the poorest parts of the world (a process euphemistically known as “restructuring”), and have eagerly participated in the looting of the former Soviet Union while mocking the resulting death and devastation. In the advanced capitalist countries the economics profession has sought to justify every step down the path to today’s obscene inequality and mass unemployment. Such fraudulent theories have naturally proven worse than useless in avoiding the disastrous consequences of the actions they advocated and justified, and their entire ideological structure now lies in ruins. Theology today is, in comparison, more realistic and far more honest.

Yet, despite this record of ignominious failure, the gatekeepers of the media and the academy still strive to ensure that the now quarrelsome and incoherent voices of yesterday’s “free market” economists alone are heard. Our task then should be to defy this ruling irrealist view in order to expand the space for reality-based political economy—of necessity socialist in inspiration—opening up new possibilities for critical analyses and social change. We are, in a sense, just now coming out of the Dark Ages of economics. We have every reason to hope that many in the new generation, faced with the growing destructiveness of our age, will cast the prevailing orthodoxy aside and turn once again to the confrontation of reality with reason. Unfortunately, time is short.