Dear Reader, we make this and other articles available for free online to serve those unable to afford or access the print edition of Monthly Review. If you read the magazine online and can afford a print subscription, we hope you will consider purchasing one. Please visit the MR store for subscription options. Thank you very much. —Eds.
Notes from the Editors
by The Editors
(Sep 01, 2012)
Topics: Imperialism Places: Asia 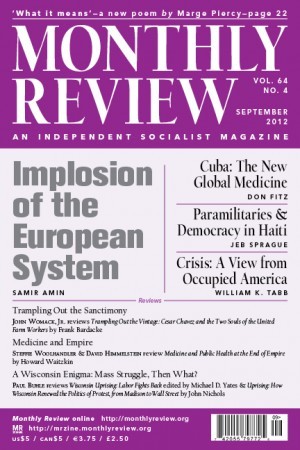 Last May President Obama signed a proclamation establishing the “Commemoration of the 50th Anniversary of the Vietnam War,” meant to last for thirteen years, from Memorial Day 2012 to Veterans Day 2025, and to be conducted by the U.S. Department of Defense. A few days later, on Memorial Day, Obama gave a speech at the Vietnam War Memorial on the subject of the Vietnam War Commemoration. He noted that although U.S. military “advisors” had died in Vietnam as early as the “mid–‘50s,” open combat by U.S. forces can be said to have begun only in January 1962—making 1962 the most appropriate year from which to date the start of the war, and 2012 the fiftieth anniversary of the war’s beginning.

Obama openly declared that the Vietnam War represented a “national shame, a disgrace that should never have happened.” But the “national shame” to which he referred was not due to the deaths of several million people, nor atrocities like the My Lai Massacre, the unleashing of chemical weapons (most notoriously Agent Orange), and the U.S. war machine’s use of more than twice the explosive power in the Vietnam War as employed by all sides in the Second World War—in an attempt to defeat a people fighting to liberate themselves first from French colonialism and then from U.S. neocolonialism. None of these facts—with the exception of an indirect reference to the effects of Agent Orange on returning Vietnam veterans—even bore mention. Rather, for Obama, the “national shame” was that returning U.S. troops were not always “welcomed home,” were often “blamed for the misdeeds of a few,” and were “sometimes…denigrated”—despite the fact that they had made enormous sacrifices in a war that they “didn’t start.”

The thirteen-year commemoration is therefore meant to assuage the country’s guilt for having supposedly failed to honor fully those U.S. troops that fought in the war, including the 58,282 Americans who died. Further, the intention, as Obama indicated, is to commemorate each battle of the war and those Americans who fought in it “at Hue and Khe Sanh, at Tan Son Nhut and Saigon, from Hamburger Hill to Rolling Thunder.” Referring frequently to what he called a “time of division among Americans” at home during the Vietnam War, Obama explicitly drew attention at one point to those who “fought against” the war, i.e., the anti-war movement—though there was no implication that this was an “honorable” stance. Today the goal, he stated, is to reunite all Americans, around a commemoration of the war and all the good that it eventually did for the country—once “the wound” was healed—in making “America even stronger than before.”

It should be obvious from all this that the current plans for an extended Commemoration of the 50th Anniversary of the Vietnam War are aimed at much more than the mere honoring of veterans and those Americans who died in the war. Rather it is an attempt to rewrite history and to erase from the national memory the basic facts about the most horrendous imperialist (North-South) war of the twentieth century, as well as the most unpopular war in U.S. history. For around a decade and a half from the mid–1970s to the Gulf War, the U.S. ability to engage in major, direct military interventions in the third world was hindered by what conservatives labeled the Vietnam Syndrome, that is, the reluctance of the U.S. population to support such forcible, direct interventions in the global South. Eventually, however, a series of historical events—the fall of the Soviet Union and the attendant rise of the United States as the sole superpower, the Gulf War, the attacks of September 11, 2001, and the invasions of Afghanistan and Iraq—have led to a new era of widespread support (avidly promoted by the organs of power) for imperial warfare by the United States in what can be called an age of “naked imperialism.” The imperial war machine quite clearly sees the Commemoration of the 50th Anniversary of the Vietnam War as a golden opportunity to erase forever whatever lingering negative public views of the Vietnam War remain, thereby obscuring the real lessons of the war. Even the defeat suffered by the United States at the hands of the Vietnamese forces is now being downplayed or denied. “All too often it is forgotten that you, our troops in Vietnam,” Obama patriotically proclaimed, “won every major battle you fought in.”

Between the early 1950s and the war’s official end in 1975, MR published some fifty articles on the direct U.S. engagement in Indochina, as well as numerous pieces that dealt with the war less centrally in the context of the critique of capitalism and imperialism. Additional articles related to the Vietnam War have been published in the magazine in the years up to the present. We intend, over the course of the next thirteen years (between now and the fiftieth anniversary of the end of the war), to refer on occasion in this space to some of these articles and the events they recorded; to reprint key articles; to correct errors arising from current official Vietnam War Commemoration propaganda; and to publish some new critical analyses of the war. In this way we hope both to recall to our older readers and convey to our younger readers the important lessons on militarism and imperialism that the Vietnam War highlighted. If the official Commemoration of the 50th Anniversary of the Vietnam War conducted by the Department of Defense is meant to generate support within the U.S. body politic for renewed imperial warfare, MR’s remembrance of the war is aimed at precisely the opposite: reinforcing opposition, both within the United States and worldwide, to present and future military interventions by the United States and the other imperial powers.

In his foreword to the 2003 edition of E.K. Hunt’s Property and Prophets, Robert Pollin recalled that in 1975, when he was taking a course on Marx’s Capital from Paul Sweezy, Sweezy responded to questions on the relation between Marxian and neoclassical economics by urging students to read E.K. Hunt and Howard J. Sherman’s remarkable textbook, Economics: An Introduction to Traditional and Radical Views (1972). For many of us studying economics from a critical perspective in the 1970s Hunt and Sherman’s text was a foundational work, allowing us to relate Marx’s critique to our current concerns. In 1979, Hunt (a professor of economics at the University of Utah) published another book—one less frequently read, but in many ways even more important: A History of Economic Thought: A Critical Perspective. This remarkable text provided a window into the history of economic analysis from its eighteenth-century beginnings to the present. As an introduction to the relation between Ricardo and Marx (and later Sraffa), including their respective approaches to the problem of the transformation of values into prices of production, Hunt’s History of Economic Thought was, in our view, beyond compare—the book to hand first to serious students wanting to learn about the subject. We recently received a new, third edition of Hunt’s book, coauthored with Mark Lautzenheiser, published in 2011 by M.E. Sharpe. This new edition is considerably longer than the original book (now 579 pages!) and brings the history of economic thought more up-to-date. In our view, it admirably achieves its objective of providing a work that is accessible to readers at different levels: undergraduates, graduates, and even professors. (It accomplishes this partly by putting the more technical material in appendices.) Its treatment of the various ways in which the main criticisms of the labor theory of value have been basically resolved (after Sraffa) is extremely lucid, as is its account of the growing logical contradictions that have beset neoclassical economics, undermining its conceptual foundations. Among the theorists it examines in its important closing chapters on late-twentieth-century economics are Baran, Sweezy, Magdoff, and Braverman. We strongly recommend this book for those wanting a serious, critical overview of the history of economic thought. For further information go to M.E. Sharpe’s webpage at http://mesharpe.com.

Michael Yates’s article “The Great Inequality” in the March 2012 issue of MR focused on a new book by Eric Schutz entitled Inequality and Power: The Economics of Class. Schutz’s book, as Yates explained, reveals: (1) the failure of neoclassical economics to incorporate class and inequality into its internal theoretical structure; (2) the arcane logic and internal contradictions that this generates; and (3) the dire consequences for standard economics in terms of the absence of anything resembling a realistic outlook on the economy. This important, if somewhat technical, book has now been issued in paperback at a more accessible price. For further information go to http://routledge.com.

We are happy to announce that Richard York, a frequent MR contributor and author of three Monthly Review Press books—The Critique of Intelligent Design, The Ecological Rift (both with John Bellamy Foster and Brett Clark), and The Science and Humanism of Stephen Jay Gould (with Brett Clark)—has just been elected Chair-Elect of the Environment and Technology (environmental sociology) section of the American Sociological Association. This is an important position. Congratulations Richard!

This month, a year after the rise of Occupy Wall Street, we are removing the Occupy symbol we have used on MR’s cover for nearly a year. In discontinuing its use, however, we are in no way withdrawing our support for the Occupy movement, nor indicating that the struggle it represents is all over. Rather, we think that the image has served its initial purpose here. Along with the Occupy movement itself we are readying ourselves for the next phase of the struggle.

Implosion of the European System
The Wall Street Bailout: An Insider’s View