Dear Reader, we make this and other articles available for free online to serve those unable to afford or access the print edition of Monthly Review. If you read the magazine online and can afford a print subscription, we hope you will consider purchasing one. Please visit the MR store for subscription options. Thank you very much. —Eds.
Notes from the Editors
by The Editors
(Mar 01, 2013)
Topics: History Political Economy Places: United States 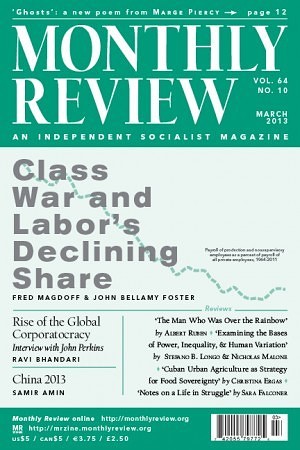 The history of capitalism is replete with cases of successful captains of industry who, suddenly concerned with their place in history, decide to write a book celebrating their achievements, while articulating a new philosophy of philanthropic capitalism—usually with the help of a ghostwriter or “collaborator” of some sort.

The most successful instance of this is Henry Ford, who famously introduced the five-dollar day for a majority of the production workers in his auto-assembly plants to counter the enormously high turnover in those plants—the result of horrendous working conditions. Journalist Samuel Crowther collaborated on three books (beginning with My Life and Work in 1922) with Ford, in which the latter, ostensibly in his own words, was portrayed as a far-sighted entrepreneur who understood that high wages were needed in the age of high-production, high-consumption capitalism. The term “Fordism” was widely adopted in the Europe of Ford’s day to refer to the supposedly benign capitalism of Crowther’s Ford. However, in the United States, where the reality of Henry Ford was better known, the notion of Fordism in this sense failed to take hold until the 1980s, some forty years after Ford’s death (finally entering into works like Michael Harrington’s The Next Left). U.S. labor could not easily forget the extreme exploitation in Ford’s plants, Ford’s virulent anti-Semitism, or the severity of his opposition to the New Deal. In 1932 Ford’s notorious Service Department under Harry Bennett—along with the police (the police chief was a former Ford detective)—opened fire with pistols and machine guns at point-blank range on the Ford Hunger March in Dearborn, Michigan, wounding around fifty and killing four marchers outright (a fifth died later of his wounds). A New York Times photographer got a bullet in the head. Bennett himself, Ford’s right-hand man, emptied his pistol on the marchers (see John Bellamy Foster, “The Fetish of Fordism,” Monthly Review, March 1988; Maurice Sugar, The Ford Hunger March).

Today, however, Crowther’s doctored version of Ford prevails. The mythology of a progressive “Fordism” is now avidly promoted by right and left alike—as in the PBS documentary on Ford’s life that aired in January 2013 in celebration of the 150th anniversary of his birth. The documentary managed to avoid all mention of the Ford Hunger March, or “Ford Massacre” as it was also called—though it did allude to Bennett and his brutal tactics on behalf of Ford in less murderous contexts.

In the same genre as Ford’s three books in collaboration with Crowther, is a new book, Conscious Capitalism: Liberating the Heroic Spirit of Business, written by Whole Foods Market co-CEO John Mackey in collaboration with Bentley University professor of marketing Raj Sisodia. Whole Foods Market is a high-end grocery chain specializing in organic and natural produce which has emerged as a large, multi-billion corporation; Mackey is fifth on the Forbes list of top U.S. capitalists in food markets. Mackey’s claim to represent a more conscientious type of capitalist was based initially on his 2005 challenge to Milton Friedman’s contention that a corporation’s sole purpose was the pursuit of profits. In contrast, Mackey insisted that Friedman was wrong and that capitalism could become a system for the pursuit of profits in a more limited sense—not as an end in itself, but in order “to create value for all of its constituencies” (Mackey, “Putting Customers Ahead of Investors,” Reason, October 2005).

Around the time of his debate with Friedman, Mackey was regularly proclaiming that his CEO salary at Whole Foods Markets was capped at fourteen times that of the average, regular full-time worker in the corporation—a claim widely disseminated in the media. However, no less an authority than Forbes demonstrated in 2006 that Mackey was deliberately deceiving the public. Standard comparisons made between the “employee income” of CEOs and the earnings of production and nonsupervisory workers are based on taking into account the total compensation of each, including not only wages and salaries but also benefits—incorporating, in the case of higher management especially, bonuses and the value of stock options. In Mackey’s case, as Forbes pointed out, it was true that his CEO salary of $436,000 in 2006 was fourteen times the average worker’s pay of $32,000. But that left out the fact that when his stock options were added in his full compensation that year came to a grand total of $2.7 million (“Whole Foods: Spinning CEO Pay,” Forbes, April 20, 2006). Of course this $2.7 million was only the compensation for his “labor” in overseeing his corporation. Mackey currently owns 61 percent of the total stock of Whole Foods Market. So in addition to what he earns for his “labor” he also receives today over 60 percent of capital’s share of the total value added generated by the corporation.

Responding to the Forbes critique Mackey dropped his CEO salary to $1 a year, making his total compensation (including stock options) for his “labor” around $800,000 for 2012, roughly nineteen times that of the compensation of the average full-time (not average nonsupervisory) worker at Whole Foods (“#490 John P. Mackey,” Forbes.com, accessed January 30, 2013; Tiffany Hsu, “Whole Foods’ John Mackey,” LA times.com, January 25, 2013. On the division of national income between capital and labor see Fred Magdoff and John Bellamy Foster, “Class War and Labor’s Declining Share” in this issue of MR).

Reading Conscious Capitalism one gets the sense of a wolf elaborately dressed up in sheep’s clothing. The book is full of references to the promotion of “value” for stakeholders, playing on the triple sense of value as cash nexus, use value, and cultural value. Recognizing that Whole Foods Market caters to a relatively upscale and “enlightened” population, Mackey, together with Sisodia, salted the book liberally with references to progressive and caring individuals: Albert Einstein, Viktor Frankl, Mahatma Gandhi, Martin Luther King, Jr., Harper Lee, Abraham Lincoln, Nelson Mandela, Tom Paine, Albert Schweitzer, George Bernard Shaw, Mother Teresa, Studs Terkel, Henry David Thoreau—even Karl Marx is mentioned with no outright criticism. However, looking more closely at the book one notes that Mackey underscored his own intellectual kinship with “a number of free-enterprise economists and thinkers, including Friedrich Hayek, Ludwig von Mises, Milton Friedman, Jude Wanniski…Thomas Sowell, and many others.” As he puts it: “I thought to myself, ‘Wow, this all makes sense. This is how the world really works’” (4).

Hence, in spite of all the references to a new form of “heroic capitalism,” which cares about employees and customers, Mackey, like most of his class, is a strong proponent of the most extreme forms of neoliberal exploitation. Both in Conscious Capitalism and in his public actions he has shown himself to be virulently anti-union, priding himself on keeping Whole Foods Market 100 percent union free, and slashing the wages of his workers even as profits have increased. He opposes government social-service spending, insisting that Social Security and Medicare should be drastically cut, and calling Obamacare “fascism.” Although Whole Foods Market parades the fact that it provides health insurance to its long-term workers it has often been under onerous terms, with the workers having to pay in 2009 a general yearly deductible of $1,300 out of their meager wages before insurance begins to cover 80 percent of their medical costs (Judy Dugan, “Whole Foods’ Crummy Employee Insurance,” ConsumerWatchdog.org, August 20, 2009). According to payscale.com, the pay levels of Whole Foods Market are typically 7 percent below the going market rate (“How This Employer Pays: Whole Foods Market, Inc.,” payscale.com). Consequently, nonsupervisory workers at Whole Foods cannot afford to buy food there, given its very high prices, despite employee discounts. Even Whole Foods Market’s commitment to organic products has been questioned (Fred Maloney, “Is Whole Foods Wholesome?” Slate, March 17, 2006). Mackey is on record as declaring, “climate change is perfectly natural and not necessarily bad” (“Whole Foods CEO: ‘Climate Change is Not Necessarily Bad‘,” Guardian, January 18, 2013).

All of this fits Mackey’s philosophy, in which he avows: “Much of today’s animosity toward capitalism stems from a misconception that we need to share all resources fairly and equitably.” In his attempt to defend growing inequality, he contends, “the poor can become wealthier without requiring the well-off to become poorer” (17). But ultimately, the main goal for Mackey, as with any personification of capital, is to become richer both absolutely and relatively, leaving the poor far behind. Mackey is not particularly culpable in this respect, since this is built into the nature of capitalism itself. What Mackey and Sisodia articulate is certainly a “Conscious Capitalism.” In that sense the book is well named. It is not, however, what it purports to be—capitalism with a conscience. That would be a contradiction indeed.