Dear Reader, we make this and other articles available for free online to serve those unable to afford or access the print edition of Monthly Review. If you read the magazine online and can afford a print subscription, we hope you will consider purchasing one. Please visit the MR store for subscription options. Thank you very much. —Eds.
Notes from the Editors
by The Editors
(Oct 01, 2013)
Topics: Ecology Inequality Political Economy Stagnation Places: Americas Global United States 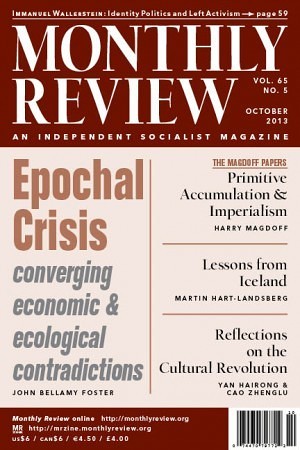 A sign of the crass economic culture of our times is the recent release by Hasbro of the game “Monopoly Empire” based on the well-known “Monopoly” game, first mass produced in 1935 by Parker Bothers, now a Hasbro subsidiary. The new version can be played in thirty minutes and is designed to take the friction out of the game while glorifying the modern corporate system. Players collect iconic brands of corporations such as McDonalds, Coca-Cola, Nestlé, and Samsung, which they add to billboard “towers” in a race to the top. Players no longer leave the game due to bankruptcy. The goal is simply to build the biggest monopoly brand empire.

The game Monopoly had its original form in the anti-capitalist “Landlord’s Game,” which was patented by Elizabeth Magie, a follower of Henry George, in 1904, and was designed to show how landlords grabbed wealth and bankrupted the populace. Magie described it as a game aimed at criticizing “the accumulation of wealth.” Game squares had inspired names like “Lord Blueblood’s Estate” and “The Soakum Lighting Co.” There were also alternative rules presenting Georgist principles. The first noted player and proponent of the game was Scott Nearing, later to become a regular columnist for Monthly Review. Nearing was a socialist critic of monopoly capitalism, influenced by the ideas of Marx, George, and Veblen. In the opening decade of the twentieth century, Nearing lived in Arden, Delaware, a Georgist community where Magie was a regular visitor. She likely introduced him, along with other residents of the community, to the game. Nearing brought the Landlord’s Game to his students at the University of Pennsylvania’s Wharton School of Finance and Swarthmore College, where he taught economics and sociology from 1908–1915, and where it was used to uncover the inequities of the system as Magie had intended—soon coming to be known as “Monopoly.” (Nearing was fired at the Wharton School in 1915 for his outspoken support of labor and his criticism of capitalism, in what became the most famous academic-freedom case of that era.) Quakers in the Atlantic City area later took up the game and gave local names to the properties on the game board. It was this version of the game that an out-of-work salesman, Charles Darrow, copied and sold to Parker Brothers (which also bought out Magie’s patent for $500). Darrow, who received a portion of the receipts of each game sold, became a millionaire. It is therefore a sign of the times that in a period once again characterized by deep economic stagnation and increasing monopolization, reminiscent of the 1930s, Hasbro has produced a new Monopoly Empire version of the classic game based on the fetishized brands of the contemporary corporate commodity economy. (See Edward J. Dodson, “How Henry George’s Principles Were Corrupted Into the Game Called Monopoly,” HenryGeorge.org, December 2011.)

Much of this history of the game Monopoly, including its origin in the Landlord’s Game, was explained three decades ago in this magazine by our friend, Marxist philosopher Bertell Ollman (“In Search of Critical Games,” Monthly Review, September 1983)—himself the creator of the game “Class Struggle.” We therefore asked Bertell for his thoughts on the evolution of Monopoly into the hyper-acquisitive Monopoly Empire. Bertell wrote back: “What she [Mary Pilon in her August 24, 2013, New York Times article “Monopoly Goes Corporate”] misses…is how a good socialist game became a good capitalist game so easily…. It is a classic case of ‘co-option’ by the capitalist system…swallowing up in black hole fashion most of the attempts to oppose it, and spitting them out at the other end as new and often more effective ways to defend the system…. That is why…‘Class Struggle’ was the only name I considered for my board game…. In so far as the New York Times article on the origins of the game [Monopoly] leaves out any reference to ‘class struggle’ (the real thing)—I didn’t see any—she [Pilon] also contributes in a softer and more ‘reasonable’ way to the same broad political objectives of the ‘Monopoly’ folks.”

For those readers intrigued by Ian Angus’s article on “The Myth of ‘Environmental Catastrophism’” in the September issue of MR we highly recommend John Farley, “The Scientific Case for Modern Anthropogenic Global Warming” in the October 2008 special issue of MR (Ecology: The Moment of Truth), refuting contrarian claims that science has succumbed to irrational and unjustified “doomsday forecasts.” We view Farley’s article as a crucial complement from a scientific standpoint to the important issues that Angus raises.

It is perhaps not surprising that nearly all of the media commemoration of the August 1963 March on Washington managed to avoid a central theme of the march itself, focusing instead on Martin Luther King, Jr.’s remarkable speech, to the exclusion of nearly all else. A column by Harold Meyerson for the Washington Post, however, stood out as a remarkable exception in this respect, observing:

The march 50 Years ago was, after all, a march “For Jobs and Freedom,” and its focus was every bit as economic as it was juridical and social…. As two excellent books about the march and the men who made it happen—The March on Washington by William P. Jones and A Freedom Budget for All Americans by Paul Le Blanc and Michael D. Yates—make clear, the march was initially conceived in late 1962 primarily to spotlight the growing unemployment, underemployment, and job discrimination plaguing African Americans in northern cities.

The second of the two books mentioned here has just been published by Monthly Review Press. For information on ordering see the ad below.