Dear Reader, we make this and other articles available for free online to serve those unable to afford or access the print edition of Monthly Review. If you read the magazine online and can afford a print subscription, we hope you will consider purchasing one. Please visit the MR store for subscription options. Thank you very much. —Eds.
Notes from the Editors
by The Editors
(Nov 01, 2013)
Topics: Ecology Places: Americas Global United States 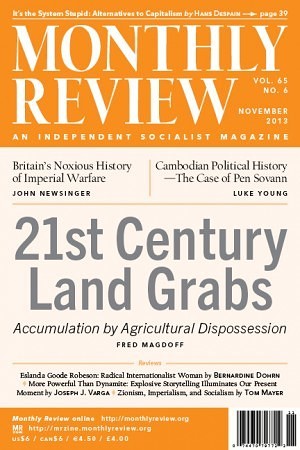 There is a pressing need for a coherent left strategy on climate change and in relation to the planetary environmental threat in general. The current scientific consensus indicates that we have at best several decades before the earth’s average surface temperature rises by 2°C, viewed as the point of irreversible climate change. This means that decisive action must be taken quickly if the world is not to go off the planetary climate cliff.

We therefore read with considerable interest Christian Parenti’s article, “A Radical Approach to the Climate Crisis” in the Summer 2013 issue of Dissent. Parenti’s main thesis is that since the time with which to address the climate change problem is so short, “it is this society and these [existing capitalist] institutions that must cut emissions. That means, in the short-term, realistic climate politics are reformist politics, even if they are conceived of as part of a longer-term anti-capitalist project of total economic re-organization.”

Parenti follows this up with a discussion of what he considers the practical measures that might be pushed in the United States as part of rational climate politics, including: (1) a carbon tax; (2) barring that, the EPA using the Clean Air Act to impose a “de facto climate tax”; and (3) what he calls a “Big Green Buy” in which federal-government purchases of green technology and goods serve to create a market for alternative, low-carbon energies.

In the final section of his article Parenti refers to Marx’s theory of metabolic rift and its application to our major environmental problems. He recognizes on this basis that capital accumulation may ultimately face insurmountable natural and social limits. Nevertheless, he insists that capitalism has been successful in the past in addressing “specific environmental crises” and that this will also likely be the case with respect to climate change. He concludes: “Anyone who thinks the existing economic system must be totally transformed before we can deal with the impending climate crisis, is delusional or in willful denial of the very clear findings of climate science”—which point to the immediacy and overwhelming seriousness of the present crisis.

In our view Parenti’s argument here is partly correct (some limited reforms to slow climate change are conceivable in the system and should be pursued), partly incorrect (capitalism if allowed to operate according to its own logic does not offer a solution to the climate problem, but only a path to destruction), and the overall conclusion to which it leads is wrong (realistic climate politics are not reformist politics). Perhaps the best way to explain this is to counterpose what we think would be a more appropriate statement on the nature of a revolutionary strategy. It would read as follows: Anyone who thinks that it is conceivable to counter climate change (and the planetary environmental crisis as a whole) without opposing and in part superseding the logic of capital accumulation is in denial of the very clear findings of climate science and critical social science—which point to the immediacy and unprecedented scale of the present epochal crisis and thus the need for truly revolutionary social change.

A revolutionary approach in this area is one that does not simply stop with whatever limited reforms are easily conceivable within the present system, but also: (1) seeks to accelerate the shift to a substantively equal and ecologically sustainable (global) society; (2) involves the mobilization of the entire population (and entire peoples), culturally, socially, and economically in the process of transformation; (3) prioritizes conservation of human and natural resources; (4) seeks to transform infrastructure and technology on a massive, democratically planned basis to meet ecological and social ends; and (5) opposes the logic of profit-making at every point along the line, substituting the alternative logic of people and the planet.

According to the New York Times on September 27, 2013 (“Climate Panel Says Upper Limit on Emissions is Nearing”), world scientists associated with the UN Intergovernmental Panel on Climate Change (IPCC) have agreed in their just-released report to set an official upper limit (or carbon budget) on the amount of carbon that can be emitted into the atmosphere if dangerous climate change is to be avoided. This limit is set at a trillion metric tons, relying on the work pioneered especially by Myles R. Allen at Oxford University, one of the pioneers of the IPCC report. At present rates of emission, the trillion ton mark, it is estimated, will be reached at around 2040. MR readers will no doubt recognize that this is the approach to the upper limit on carbon emissions (relying directly on the work of Allen) that we have adopted for several years now in Monthly Review, where the political-economic implications of the trillionth ton limit have been explored in detail in successive analyses. (See especially John Bellamy Foster, “Capitalism and Environmental Catastrophe,” MRzine, October 29, 2011; John Bellamy Foster and Brett Clark, “The Planetary Emergency,” Monthly Review, December 2012; and John Bellamy Foster, “James Hansen and the Climate-Change Exit Strategy,” Monthly Review, February 2013.)

The upcoming issue of The Socialist Register 2014: Registering Class (forthcoming, Monthly Review Press), edited by Leo Panitch, Greg Albo, and Vivek Chibber, constitutes the fiftieth-anniversary issue of the journal, which was first started by Ralph Miliband and John Saville in 1964. We at MR would like to offer our congratulations to Leo, Greg, and Vivek, and to the many writers who have contributed over the years to the Register. Those interested in purchasing a copy of the fiftieth-anniversary issue may order online.

We recently received a copy of a new introductory macroeconomics textbook, Principles of Macroeconomics: Activist vs. Austerity Policies (M.E. Sharpe, 2013) by MR authors Howard Sherman and Michael Meeropol (written with the help of Paul Sherman—also an MR author). As an introductory textbook meant for college and university economics classes the book comes with a hefty price tag of $59.95. There are two remarkable things about the book though that will make it of interest to numerous MR readers. First, the extraordinary clarity and accessibility of this work (despite its complex material), something that is characteristic of the work of both Sherman and Meeropol. Second, the entire book, as the subtitle indicates, is organized around the debate between radical and austerity economics. Hence, it takes on many of the most important issues related to the Great Financial Crisis in the process of trying to introduce students to basic macroeconomics. We cannot think of a better way to teach this material.

We were sad to learn of the death at age 77 on September 9, 2013, of our friend Saul Landau, activist, filmmaker, writer, and MR author. We plan to provide a brief treatment of Saul’s significance for the left in a future issue.