Dear Reader, we make this and other articles available for free online to serve those unable to afford or access the print edition of Monthly Review. If you read the magazine online and can afford a print subscription, we hope you will consider purchasing one. Please visit the MR store for subscription options. Thank you very much. —Eds.
Notes from the Editors
by The Editors
(Feb 01, 2014)
Topics: Ecology Stagnation Places: Americas Global United States 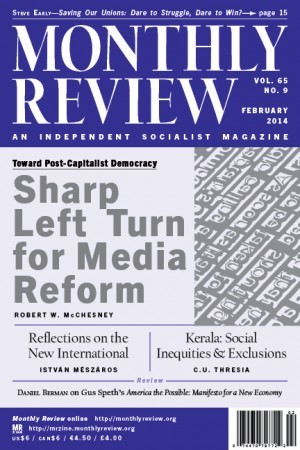 A comparison of the present state of the natural sciences with that of the social (or human) sciences cannot but give rise to a disquieting sense of the relative poverty of the latter. Although natural scientists are raising the alarm with regard to the planetary environmental emergency and are demanding social solutions, social scientists have largely failed to take up the challenge. To be sure, there has been a vast upsurge in recent years of social-scientific discussions of climate change. But most of this work has remained confined within the narrow boundaries of mainstream social science, relying on such amorphous, dehistoricized concepts as human behavior, organizations, institutions, government, economic growth, industrialization, modernization, the market, energy efficiency, public opinion, and the like—variables that can be treated in purely technical, “non-normative” terms, divorced from historical context, social relations, and social agency.

Conspicuously missing from conventional social science is any serious consideration of the actual social system in which we live and which clearly constitutes the root of the problem: namely, capitalism. Also excluded are such fundamental issues as accumulation, class (including its gendered and racialized forms), the state, the cultural apparatus, imperialism, monopolistic corporations, economic stagnation, financialization, Marx’s concept of the metabolic rift—and indeed all the other major historical realities of our time. (For a detailed critique of the social sciences in this respect see John Bellamy Foster, Brett Clark, and Richard York, The Ecological Rift [Monthly Review Press, 2010], 19–38.)

In many ways this is an old story. A major ideological cleansing of social science was accomplished during the Cold War years (and has only been extended under today’s global neoliberalism). In 1960 the influential neoconservative sociologist Daniel Bell, then associated with the CIA-sponsored Congress for Cultural Freedom, justified the systematic closing off of social science to all critical views as The End of Ideology (the title of his influential book). This mantra, which has prevailed ever since, was expressly designed to marginalize the left and the historical concepts with which it was associated—all of which were designated as “ideological”—and to put in its place a false objectivity. The result is that today we find ourselves faced with what South African writer Bert Olivier has called “the scandalous complicity, on the part of the social sciences, with the very economic system that is driving ecological ruin” (“Is There a Crisis of Credibility in the Human Sciences?,” Thought Leader [Mail & Guardian] September 23, 2013, http://thoughtleader.co.za).

It follows that a new revolutionary period in the development of social science is now called for if we are to address our ever-more pressing global problems. Such an intellectual revolution would need to resemble the intellectual revolt associated with the rise of the New Left in the 1960s, in which the work of C. Wright Mills and a revitalized critical-humanistic Marxism challenged the dominant social science head on. (A crucial throwing down of the gauntlet in this regard was Mills’s 1959 book, The Sociological Imagination, part of which was first published in MR in October 1958.) But the struggle today must be even more radical in nature, exhibiting a level of intellectual courage and commitment equal to our increasingly global and crisis-ridden age.

A moderately hopeful sign in this regard—while also indicating just how far we still have to go—is evident in UNESCO’s World Social Science Report 2013: Changing Global Environments, developed in collaboration with the International Social Science Council (available at http://worldsocialscience.org). Most of the 600-plus-page report (which encompasses 108 chapters) is anything but radical. Nevertheless, its origin in UNESCO means that it necessarily includes some perspectives from the global South, where social science in this area is generally more critical. Moreover, Heide Hackmann, executive director of the International Social Science Council, who directed the report, clearly sought, in her own contributions, to emphasize the need for fundamental societal change, however abstractly conceived. The scientific advisory committee included notable critical scholars, such as ecosocialist Enrique Leff (Mexico), author of Green Production, and sociologist John Urry (UK), author of Climate Change and Society—a work that discusses Marx’s metabolism concept.

From our standpoint the most interesting of the 108 chapters is chapter 22, “African Perspectives Needed on Global Environmental Change Research” by James Murombedzi of the Council for the Development of Social Science Research in Africa. He underscored the need to address “the historical causes of environmental degradation in processes such as colonialism,” imperialism, and “Africa’s participation in the global capitalist system.” “Class and other struggles for social change,” he explained, “increasingly focus on environmental and natural resource issues” (for example the current global land grabs) resulting in “the emergence of movements that contest the expropriation of natural resources.” Murombedzi also provided a trenchant criticism of contemporary social science, arguing that “even as environmental concerns have been incorporated into social science disciplines, their treatment and place within those disciplines is marginal and sometimes even contested”—referring in this context to MR editor John Bellamy Foster’s critical analysis in “Marx’s Theory of Metabolic Rift” (American Journal of Sociology, September 1999).

Such critical-realist treatments of capitalism, imperialism, and class-related struggles were notably absent though from the other 107 chapters in the report, which stayed mostly within the bounds of official social science discourse. Nevertheless, Olive Shisana, from South Africa, president of the International Social Science Council, declared in her preface that “the current model of economic development is simply unsustainable.” She also noted that international surveys have shown that concern regarding climate change and other global environmental problems is negatively correlated with GDP and was thus much higher in the global South where climate catastrophes are most evident.

In the general introduction to the report (chapter 1) and her follow-up analysis written together with colleagues (chapter 2), Hackmann insisted that “accumulating sustainability crises” arising from prevailing “socio-ecological systems” required a “deep social transformation”—midwifed by the transformation of the social sciences. Remarkably, she traced the first major challenge to international social scientists to develop such an integrated, critical approach linking the natural and social sciences back more than forty years—to the Japanese Marxian economist, environmental theorist, and MR author, Shigeto Tsuru, who insisted that the focus be placed specifically on what he called “environmental disruption” on the grounds that “the significant aspect of the environmental problem is man-made, not natural but social, in origin” (Tsuru, ed., Proceedings of the International Symposium on Environmental Disruption [International Social Science Council, 1970], 325).

Urry, writing in chapter 53 on “Are Increasing Greenhouse Gas Emissions Inevitable?,” argued for “seismic shifts” in social systems and in our forms of social analysis that would “reverse” many of the dominant tendencies of today’s society. Nevertheless, he carefully refrained from any reference to capitalism and Marx’s concept of metabolic rift despite their prominence in his earlier book on climate change—preferring in this instance to refer to the environmental problem in more abstract, less contentious terms as a question of growth versus degrowth.

The World Social Science Report 2013 thus makes it abundantly clear both through its explicit statements and its all-too complicit silences that a revolutionary reawakening in social science is desperately needed today. Yet such a reawakening would necessarily have to be built on classical critiques of capital accumulation and on the possibility for the creation of a society of substantive equality and sustainable human development—both of which lay at the heart of Marx’s concept of socialism.

Indeed, what is missing from the UNESCO report, with only minor exceptions, is a recognition of the growing political and intellectual movement associated with what has been called “ecosocialism”—itself a radical new development in social science. For those interested in learning more about this movement we recommend the Ecosocialist Coalition’s System Change Not Climate Change website (http://systemchangenotclimatechange.org); Ian Angus’s Climate & Capitalism at http://climateandcapitalism.com (hosted on the MR website); and the numerous works on Marxist ecology published by Monthly Review Press, Marxism Ecology . It is in this analysis that one finds a unity of socio-ecological theory and practice of the kind that Tsuru called for some four decades ago: dedicated to revolutionizing our social metabolism with nature, and hence the entirety of our productive relations—the very conditions of human existence.

We recommend, as a heartening companion piece to C.U. Thresia’s “Social Inequities and Exclusions in Kerala’s ‘Egalitarian’ Development” in this issue, B.J. Biju’s “Angels are Turning Red: Nurses’ Strikes in Kerala,” in the Economic & Political Weekly 48, no. 52 (December 28, 2013): 25–28. A large majority of the nurses in all of India are from Kerala, and their struggle is of great significance.

We’re pleased to announce that two recent Monthly Review Press books— An Introduction to the Three Volumes of Karl Marx’s Capital by Michael Heinrich, and Race in Cuba by Esteban Morales Domínguez—have been named Outstanding Academic Titles by CHOICE, the magazine of academic libraries. According to CHOICE editor and publisher Mark Cummings, “These outstanding works have been selected for their excellence in scholarship and presentation, the significance of their contribution to the field, and their value as important—often the first—treatment of their subject.” We congratulate the authors, editors, and translators of these important works.