Dear Reader, we make this and other articles available for free online to serve those unable to afford or access the print edition of Monthly Review. If you read the magazine online and can afford a print subscription, we hope you will consider purchasing one. Please visit the MR store for subscription options. Thank you very much. —Eds.
Notes from the Editors
by The Editors
(Mar 01, 2014)
Topics: History Stagnation Places: Americas United States Venezuela 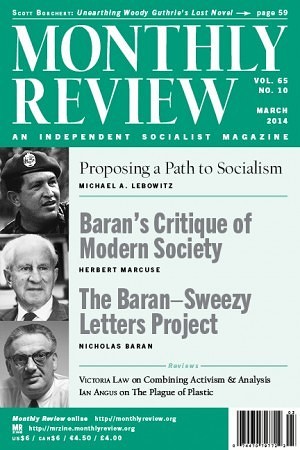 This issue of Monthly Review is mainly devoted to two commemorations: for Paul Alexander Baran, who died fifty years ago this month; and for Hugo Rafael Chávez Friás, who died one year ago this month.

Paul A. Baran was the author of The Political Economy of Growth (1957) and, with Paul M. Sweezy, Monopoly Capital (1966). Baran’s work on the roots of underdevelopment focused on the way in which the imperialist world system robbed countries of their actual and potential economic surplus, chaining them to conditions of dependency. He went on to explain how these chains could be broken and poor countries could develop through revolutionary change. In Monopoly Capital, Baran and Sweezy provided a powerful critique of accumulation in the capitalist core in the twentieth century. We are publishing for the first time in this issue a talk by Herbert Marcuse on Baran, given at Stanford on the second anniversary of Baran’s death, as well as an article by Baran’s son, Nicholas Baran, incorporating previously unpublished letters from the Baran-Sweezy correspondence. In addition, we are posting on the MR website in commemoration of Baran the never before published Baran-Marcuse Correspondence.

Hugo Chávez, president of Venezuela from 1999 until his death in March 2013, provided the crucial inspiration for the Bolivarian Revolution in Venezuela. Chávez created a new vernacular of revolution linked historically to Latin America’s Bolivarian tradition (marked by Bolívar’s famous statement that “equality is the law of laws”). Among Chávez’s most important formulations was “the elementary triangle of socialism,” in which socialism was seen as consisting of: (1) social ownership of the means of production; (2) social production organized by workers; and (3) satisfaction of communal needs. In this issue Michael Lebowitz tells the story of how Chávez developed and courageously attempted to implement this crucial conception (based on the ideas of István Mészáros and through the intervention of Lebowitz himself). This stands as an inspiring example of the dialectical unfolding of revolutionary theory and practice in our time.

For more than four decades, beginning with Horace B. Davis’s Marxism and Nationalism (1967), MR has argued that the repeated claims, even by some Marxists, that Marx saw economic and social development in unilinear, Eurocentric terms, conceiving of colonialism and imperialism as positive forces, were wrong—especially when judged in terms of Marx’s mature writings (including Capital) from the late 1850s on. Marx was deeply affected by the Sepoy Rebellion in India in 1857–1858 and the Second Opium War (1856–1860) directed by the European powers against China, along with the struggles during this same period for Irish independence. Hence, from the late 1850s on, he became increasingly critical of colonialism and imperialism and a strong supporter of national liberation and indigenous struggles around the world. This was amplified by his intense studies into noncapitalist social formations on every continent, continuing right up until his death in 1883. Two landmark articles providing extensive evidence of this were published in MR in the 1970s and ’80s: “Marx and ‘Underdevelopment’” (MR, April 1979) by the Japanese Marxist Kenzo Mohri of the Institute of Social Science, University of Tokyo; and “Marx on India” (MR, January 1984) by Indian Marxist Sunti Kumar Ghosh, former editor of Liberation, the central organ of the Communist Party of India (Marxist-Leninist). (See also John Bellamy Foster, “Marx and Internationalism,” Monthly Review, July–August 2000.) Another major contribution to this line of analysis was published by Monthly Review Press in 1983 in the form of Late Marx and the ‘Russian Road’: Marx and the Peripheries of Capitalism, edited by Teodor Shanin. A similar understanding of Marx’s approach to imperialism was evident in Samir Amin’s important work Eurocentrism (Monthly Review Press in 1989; second edition 2009). Indeed, it would be safe to say that the interpretation of Marx as anti-colonialist from the late 1850s on has been the dominant interpretation of his work for many years in the three continents of the third world.

It is with this background in mind that we read with interest the recent book by Kevin B. Anderson, Marx at the Margins (University of Chicago Press, 2010)—now widely seen as having definitively disproved the “conventional” myth that Marx advanced a unilinear view of historical development that was strongly supportive of colonialism/imperialism. Although mentioning Shanin’s Late Marx in his book, Anderson regrettably refrains from referring to the prior contributions of thinkers such as Davis, Mohri, Ghosh, and Amin (nor does he reference other key thinkers who advanced similar interpretations that preceded his own, such as Umberto Melotti in Marx and the Third World [1977]). Nevertheless, Anderson’s book has the merit of marshaling the evidence in a highly comprehensive and scholarly way, thereby putting the final nail in the coffin of the myth of Marx’s Eurocentrism. Adding to this sense of irrefutable critique, Anderson was able to draw at certain points in his argument, particularly in his chapter 6 on Marx’s later writings, from still unpublished materials that are part of the MEGA (Marx-Engels Gesamtausgabe) project. Marx at the Margins has the further virtue of including a valuable treatment of how Marx incorporated race and gender into his critical analysis, demonstrating that Marx’s theoretical framework had a multilayered socio-economic and cultural basis.

Capitalism, Nature, Socialism is celebrating its twenty-fifth anniversary in its January 2014 issue. CNS was started in 1988, with MR author James O’Connor and Barbara Laurence as founding editors. The current editor is Salvatore Engel-Di Mauro. We would like to congratulate all of those involved in this important journal for the crucial contributions that it has made to ecology and socialism over the past quarter-century.

MR receives considerable correspondence from readers, which we very much appreciate, despite continuing difficulties in keeping up with all the letters, given our limited resources. Here are a few important and encouraging communications that we have received recently:

Joe Roberts—a long-time friend of the magazine in Canada, where he taught political science for many years at Regina College (affiliated with the University of Saskatchewan)—wrote in December that “Monthly Review (and the library of publications [from Monthly Review Press] from I.F. Stone’s Hidden History onward) was the most continuous text I used throughout my career (and still promote as often as possible). I read it as my post-graduate source of sanity. And I know from friends, students and family across Canada and the United States that MR continues to be a primary source of contemporary and historical knowledge and judgment in the world of our time. Thank you all.” Joe adds that in his view MR is “the finest intelligence I’m familiar with for navigating today’s world.” More specifically, he congratulates MR in recent years for having deepened “what Paul and Harry began to identify as capitalism’s dynamic impact on the environment,” conclusively demonstrating that “what had been two separate realms for me were married as aspects of a single problem—uncontrolled expansion/accumulation.”

Another reader, Jean H. Sloan, wrote to us in November of the enormous challenges facing humanity generally, and the working class specifically, and concluded: “The need is urgent for the education of the working class, and time is limited. I can only applaud the excellent work Monthly Review is doing in that regard.”

Jim Walters in Iowa informed us in December that he had published a guest opinion for his daily newspaper, the Iowa City Press-Citizen, in response to a column in the paper written by Republican ex-Congressman Jim Leach. (Leach was coauthor of the 1999 Gramm-Leach-Bliley Act repealing the New Deal’s Glass-Steagall Act of 1933, which had put restraints on financial capital.) In a remarkable op-ed contribution, “Leach Hardly the Best Spokesman for What Ails Politics,” appearing in the Press-Citizen on November 25, 2013, Walters rebutted Leach’s austerity views, pointing instead to the argument on secular stagnation now put forward by Paul Krugman and others—and emphasizing that the stagnation tendency had been long documented at a deeper level on the left “mostly in the pages of small journals like Monthly Review.”

For as long as anyone can remember, Pete Seeger, who died last January 27, aged ninety-four, had been a subscriber and careful reader of Monthly Review. Pete often corresponded with the editors with unflinching enthusiasm about what he liked and, occasionally disliked, in these pages. His comments and suggestions were always insightful, useful, and infused with warmth and devotion.

Pete even wrote for MR. In July–August 2002, he reviewed Doris Haddock’s Granny D: Walking Across America in My 90th Year, which we titled “A Remarkable Journey.” In January 2005, he and interviewer Linda Forbes discussed social movements in these pages under the headline “Possibility and Hope: Getting from Here to There.” Pete was not given to facile enthusiasms. He understood just how difficult was the pursuit of social justice and socialism, to which he had lifelong commitments. Nonetheless, he served his revolutionary vision with extraordinary energy. MR will sorely miss Pete Seeger. We plan a major collective portrait and appreciation to be published later this year.

Correction: On page five of Bob McChesney’s “Sharp Left Turn for the Media Reform Movement” in the February 2014 MR, it should have stated that Kshama Sawant was elected to the Seattle City Council in 2013 (not 2012).

Proposing a Path to Socialism: Two Papers for Hugo Chávez
Wake Up and Smell the Oil