Dear Reader, we make this and other articles available for free online to serve those unable to afford or access the print edition of Monthly Review. If you read the magazine online and can afford a print subscription, we hope you will consider purchasing one. Please visit the MR store for subscription options. Thank you very much. —Eds.
Notes from the Editors
by The Editors
(Apr 01, 2014)
Topics: Media Political Economy Places: Global 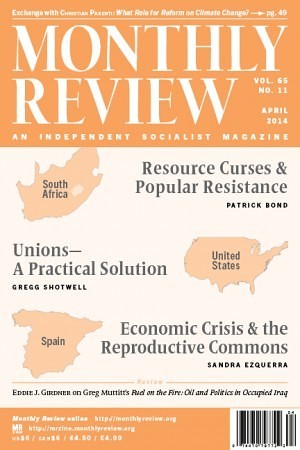 The insidious nature of the economy, state, and cultural apparatus of global monopoly-finance capital is difficult to perceive—if only because it is to be found everywhere we look. Focusing on a specific case can therefore help us see what might otherwise elude us. A striking instance of this principle is to be found in the recent takeover of Chrysler by Fiat—linking a century-old Italian auto dynasty, the Great Financial Crisis of 2007–2009, the U.S. corporate bailout, the 2014 Superbowl, and the American folk music tradition.

The Great Financial Crisis struck U.S. automakers especially hard due to their heavy involvement in financial speculation, their existing excess industrial capacity, and the sharp decline in consumer car purchases following the crash. In the auto bailout the federal government poured $10.5 billion of taxpayer funds into Chrysler alone. In the process, Washington simply handed over a 20 percent share of the company to the Italian auto company Fiat without the latter having to pay a single cent for the stock, ostensibly in return for Fiat providing its critical managerial and technological expertise. The bailout agreement also stipulated that Fiat would have the option to buy up the remaining Chrysler shares from the U.S. government, the Canadian government, and the United Auto Workers (UAW) health-care trust.

With the U.S. automobile industry slowly recovering over the last three years while the European auto industry sank into near-depression conditions, Fiat hurried to purchase the remaining Chrysler shares so as to seize its massive cash pile. In the end, it was able to purchase the now highly profitable U.S. automaker for $3.7 billion, around one tenth (in nominal terms) of the $36 billion that Daimler-Benz paid for the company in 1998. In January 2014, Fiat announced that Chrysler had become its wholly owned subsidiary, with the firm now renamed Fiat Chrysler. The Netherlands was chosen as the headquarters of the newly merged company to avoid U.S. and Italian taxes. The biggest shareholder in what was now the world’s seventh biggest auto producer was the Italian Agnelli family, retaining a 30 percent share through its family investment firm Exor. John Elkann, grandson of the Fiat founder Gianni Agnelli and chairman of both Exor and Fiat, effectively runs the company, supported by Sergio Marchionne, CEO of both Fiat and its Chrysler subsidiary.

At the very moment that Fiat made its January Chrysler takeover announcement it also sought to reassure financial investors by informing them that it would be aggressively marketing the new company beginning with a long, two-minute, multi-million dollar Superbowl commercial, reaching over a 100 million prime U.S. television viewers. The reason for this marketing offensive was clear. With Chrysler now a subsidiary of an Italian automaker the palpable fear was that it would no longer be perceived as a U.S. company, particularly by such key U.S. groups as workers, labor unions, progressives, and older, moneyed Americans—potentially threatening the viability of Fiat Chrysler’s American market, upon which the entire megacorporation was now dependent. Worse still, Elkann and Marchionne were worried about the backlash that could occur once the U.S. body politic put two and two together and realized that Washington had literally given away a major U.S. auto corporation, which was now generating enormous monopoly profits courtesy of generous taxpayer subsidies coupled with the exploitation of U.S. workers—while Chrysler’s cash reserves were now being used to bail out its Italian parent corporation. Fiat thus decided to use an extended Superbowl advertisement to plant deep in the popular consciousness the notion that Chrysler was as American as America itself.

To accomplish this Fiat relied on its and Chrysler’s Chief Marketing Officer Olivier Francois, known for his edgy and controversial sales communication techniques. Francois turned to folk music icon of the 1960s Bob Dylan, building on the relationship established through Chrysler’s previous use of Dylan’s music in two Jeep Cherokee ads. Dylan was to be the star of the 2014 Superbowl ad—while also providing the voiceover and music—in what Fiat Chrysler in a press release was to dress up as an “apologue” (from the Greek, referring to a brief fable or allegorical story). In the ad, Dylan intones:

Is there anything more American than America?
‘Cause you can’t import original
You can’t fake true cool.
You can’t duplicate legacy.
Because what Detroit created was a first
And became an inspiration to the rest of the world.
Yeah Detroit made cars. And cars made America….
And when it’s made here, it’s made with the one thing
You can’t import from anywhere else—American Pride.
So let Germany brew your beer,
Let Switzerland make your watch,
Let Asia assemble your phone.
We will build your car.

In the Superbowl commercial, we see Dylan rechristening Chrysler as part of American folk culture, erasing from public consciousness whatever negative images may have arisen from the bailout and the subsequent foreign ownership. The commercial consists of a dream-like setting giving rise to a flurry of visual images (all electronically tested on focus groups for their gut emotional appeal), among them: cheerleaders; cowboys; a model draped in the American flag; a boy running; a diner; an elderly white man; a farm house; motorcycle riders; a merry-go-round; Marilyn Monroe; James Dean; a baseball pitcher; a basketball layup; a rodeo; factory workers; a classic wartime propaganda poster (“We Can Do It”); a white-collar worker; a white woman with a baby; an African-American man; the natural landscape; the freeway; a car zooming down the open road; Dylan playing pool (evoking Paul Newman in The Hustler). It ends with a picture of the mass assembly of iPhones by women workers in Asia, which is contrasted to Chrysler’s American-based production and its featured product: the Chrysler 200 with its logo “America’s import.” Such sophisticated corporate propaganda is meant to create continuous buzz around the various side controversies it generates, while at the same time distracting the viewer from its main subliminal message: that Chrysler is no less “American than America.”

Still, for those on the left with memories of the 1960s counterculture, Bob Dylan turned car salesman can hardly be ignored. As Paul Baran and Paul Sweezy noted in “Theses on Advertising” (reprinted in the July–August 2013 issue of Monthly Review) among the deplorable influences of advertising on culture is that “the advertisers can be held responsible for the corruption of the artistic talent which they purchase.” Dylan’s evolution from popular folk artist to a promoter of commercial products is a reminder of how easy it is for artists to be entrapped by the cultural apparatus of the commodity economy, violating their own artistic integrity, which demands that their artistic talent not become a mere link in a global commodity chain.

The Dylan tragedy brings to mind the many courageous, creative artists who continue to fight against the reigning plutocracy and refuse to give an inch, despite the power of the cultural apparatus, and how much it costs them both personally and materially. If Dylan fails to emerge out of this modern “apologue” as a hero who held out to the end, others do. Pete Seeger, who died the week before the 2014 Chrysler Superbowl ad starring Bob Dylan was aired, was one such figure, revolutionary to the core, like Woodie Guthrie before him, voicing to the end: “We Shall Overcome.”

The “Notes from the Editors” in the February 2014 issue of Monthly Review included an extended assessment of The World Social Science Report (2014) co-published by UNESCO and the International Social Science Council (ISSC). MR readers will be interested to learn that ISSC has just launched a World Social Science blog commencing with the MR editorial—now re-entitled “The Need for Eco-Socialism?”—and three articles mentioned in that piece—by Olive Shishana, Heidi Hackman and Susanne Moser, and James Murombedzi (see http://blog.worldsocialscience.org). Visitors to the blog are asked in its initial message to comment on MR’s statement on the status of world social science today (http://blog.worldsocialscience.org/2014/02/welcome-world-social-science-blog).