Dear Reader, we make this and other articles available for free online to serve those unable to afford or access the print edition of Monthly Review. If you read the magazine online and can afford a print subscription, we hope you will consider purchasing one. Please visit the MR store for subscription options. Thank you very much. —Eds.
Notes from the Editors
by The Editors
(Jul 01, 2014)
Topics: History Marxism Places: Europe France Germany 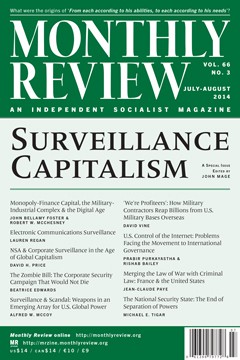 Allusions to Marx seem to be emanating from all points of the political compass these days in the context of the current political-economic crisis of capitalism, reflecting the remarkable resurgence of both Marxism and anti-Marxism. What is especially notable in this respect is the extent to which such allusions have come to focus on the saying, “from each according to his ability, to each according to his needs”—usually identified with Marx’s famous 1875 Critique of the Gotha Programme. Conservatives frequently quote “from each according to his ability” (ignoring the rest of the saying) and use it as a kind of code phrase for “Marxism” to attack all progressive measures. Thus U.S. Supreme Court Justice Antonio Scalia’s dissenting opinion in the April 29, 2014 Supreme Court decision (Environmental Protection Agency, et al. v. EME Homer City Generation, L.P., et. al.) quoted “from each according to his ability” three times as a way of attacking federal bureaucratic authority over interstate air pollution—crucial to regulating emissions from coal-fired plants. Others in conservative circles have recently used the phrase to criticize Thomas Piketty’s influential new book Capital in the Twenty-First Century, which tries to incorporate the reality of inequality into neoclassical economics. All of this caused Paul Krugman to observe ironically in his New York Times column on May 11, 2014, that, “Everywhere you look these days, you see Marxism on the rise. Well, O.K., maybe you don’t—but conservatives do.”

Not only the right has been drawing attention to this memorable saying associated with Marx; many on the left have been calling it to mind as well. In his 2013 book, The Democracy Project, anthropologist David Graeber employs it to advance the anarchist notion that “all societies are communistic at base.” He stresses that the famous saying did not originate with Marx’s Critique of the Gotha Programme, but was taken from the French socialist Louis Blanc’s Organization of Work, published “in 1840” (Graeber, Democracy Project, 293–95). The same point is made in the Random House Dictionary of Popular Proverbs and Sayings (1996) and in many other places.

All of this would seem at first glance to push Marx into the background with respect to the single most important statement on the egalitarian principle governing communist society, relegating him to the position of being a mere popularizer of a French socialist conception. However, here the story takes still another twist. In volume 2, chapter 5 of Marx and Engel’s 1845–1846 work The German Ideology, completed three years before Blanc’s use of the phrase (but remaining unpublished in Marx and Engels’s lifetime), one finds the following extraordinary passage:

But one of the most vital principles of communism, a principle which distinguishes it from all reactionary socialism, is its empirical view, based on a knowledge of man’s nature, that differences of brain and of intellectual ability do not imply any differences whatsoever in the nature of the stomach and of physical needs; therefore the false tenet, based upon existing circumstances, “to each according to his abilities,” must be changed, insofar as it relates to enjoyment in its narrower sense, into the tenet, “to each according to his need”; in other words, a different form of activity, of labour, does not justify inequality, confers no privileges in the respect of possession and enjoyment (Marx and Engels, Collected Works, vol. 5, 537).

Here we see already, more than a quarter-century before the Critique of the Gotha Programme, and prior to Blanc’s 1849 article, the development of Marx’s distinctive approach to human productivity and needs. Moreover, the emphasis is clearly on needs. Thus the St. Simonian focus on “to each according to his abilities” is seen as too narrow and limited, and is countered (or rather supplemented) with the notion of “to each according to his needs.” The German Ideology and the Critique of the Gotha Programme both take their stand contra mundum with the deeper egalitarianism of Babeuf and his “conspiracy of equals.” According to Babeuf: “Equality must be measured by the capacity of the worker, and the need of the consumer, not by the intensity of the labour and the quantity of things consumed” (Philippe Buonarroti, Conspiration pour l’égalité dite de Babeuf [1828]; quoted in István Mészáros, Beyond Capital, 221). This is clearly the broad tradition out of which Marx arises, and it is to Babeuf that we must ultimately attribute this deeply communistic view.

In fact, like all great ideas, the conception of “from each according to his ability, to each according to his needs” was a social or collective, not merely an individual, product. In this respect it is significant that it was probably Moses Hess, a German socialist/communist thinker with whom Marx and Engels were closely associated in the early 1840s—and not Marx and Engels themselves—who drafted chapter 5 in volume 2 of The German Ideology. The chapter appears to have been an adaptation of an earlier article by Hess, edited (and perhaps refined) by Marx. Hess’s name is noted on the manuscript version of the chapter (Marx and Engels, Collected Works, vol. 5, 606–7). This means that the core conception underlying the best known description of communist principles can be said to have originated with Babeuf and Cabet, was elaborated by Hess and Marx/Engels (and inserted into Marx and Engels’s The German Ideology), put into a slightly more succinct form by Blanc, and finally explored in depth decades later by Marx—in what was to be his most detailed explanation of the transition to socialism/communism.

In the end what is significant is that the saying, from each according to one’s ability, to each according to one’s need—the gender-neutral way in which it needs to be referred to today—constitutes the hard core of what István Mészáros calls “substantive equality,” the revolutionary culmination (at the level of thought) of socialist theory. As El Libertador, Simón Bolívar, was to express it: equality is “the law of laws.” (István Mészáros, The Challenge and Burden of Historical Time, 258–64, 302, 461.)

William Franklin (“Bill”) Ash, who wrote for Monthly Review in the 1960s and was the author of the Monthly Review Press book, Marxism and Moral Concepts (1964), died at age 96 on April 26, 2014. Ash was an American-born British Spitfire pilot (he had enlisted in the Royal Canadian Air Force early in the war) who was shot down in 1942, and made numerous escapes from Nazi prison camps. He became perhaps the chief inspiration for Steve McQueen’s character “the cooler king” in the 1963 Hollywood film, “The Great Escape.” After the war Ash studied politics, and became head of the BBC’s Indian operations. He was a cofounder of the Communist Party of Britain (Marxist-Leninist) and became the chair in the 1970s and ‘80s of the Writers’ Guild of Great Britain. His wartime experiences were depicted in his 2005 book Under the Wire, on which he collaborated with Brendan Foley. An excellent obituary of Ash by Foley appeared in the Guardian, April 29, 2014 (“Bill Ash obituary”). The best way to remember Bill Ash is in the terms that he himself used when writing an obituary for Bill Blake in MR in June 1968. Quoting Mao, Ash said: “‘Though death befalls all men alike, it may be weightier than Mount Tai or lighter than a feather.’ The death of one who spent his life serving other people and spreading a knowledge of the liberating force of Marxism is ‘weightier than Mount Tai.’”