Dear Reader, we make this and other articles available for free online to serve those unable to afford or access the print edition of Monthly Review. If you read the magazine online and can afford a print subscription, we hope you will consider purchasing one. Please visit the MR store for subscription options. Thank you very much. —Eds.
Notes from the Editors
by The Editors
(Jun 01, 2015)
Topics: Capitalism Ecology Education Political Economy Places: Americas Global United States 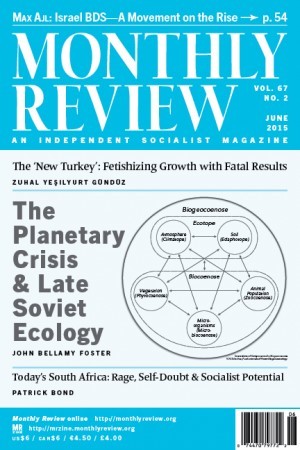 In two Monthly Review special issues, “Education Under Fire: The U.S. Corporate Attack on Students, Teachers, and Schools” (July-August 2011) and “Public School Teachers Fighting Back” (June 2013), we sounded an alarm regarding the rapid restructuring and privatization of U.S. K–12 public schools. In terms of the scale of nationwide restructuring, the corporate takeover of education is unprecedented in modern U.S. history. The closest comparison we can come up with is the destruction of the street car systems across the United States and the building of the interstate highway system—in which freeways went right through cities for the first time, often in the face of neighborhood and community resistance. With respect to K–12 education, unimaginable amounts of private funds have gone into pressuring and corrupting government at every level, while the control mechanisms of the new educational system are increasingly left in private, not public, hands. The Common Core Standards and related high-stakes tests are at the center of this new system, and are the product of private corporate groups outside the direct reach of government.

Since the object is to wrest control of schools from educational professionals, parents, and communities, these standardized tests are explicitly designed to be developmentally inappropriate for age groups, and for failure rates of 70 percent or more. This allows schools to be closed, teachers to be fired, and a further privatization of the whole education system to occur. Institutionally, this new system has been engineered by such organizations as the four big private “venture philanthropy” foundations (the Gates, Walton, Broad, and Dell Foundations) together with the Business Roundtable, education-industry organizations like Pearson and McGraw-Hill, as well as the National Governors Association and the Council of Chief State School Officers—the last two are both private groups, though include officials elected to state office. Numerous smaller organizations—with friendly names like Stand for Children and Student Achievement Partners—have been the beneficiaries of much of the corporate largesse while also being given responsibility for helping to leverage the new system. Policies enabling all of this have been pushed by the Clinton, Bush, and Obama administrations. Obama from the start made the corporate takeover of public education one of his top domestic priorities, appointing Arne Duncan, the choice of the Gates Foundation, as his secretary of education.

Today we are seeing a huge groundswell of resistance from parents, students, and teachers all across the United States to the new high-stakes, privatized testing system. Constitutionally, parents are allowed to opt their children out of standardized tests—although this right is said to be confined to reasons of disability and “religion” (the latter confusedly referring to fundamental values in U.S. law). In New York State in April it was announced that 184,000 out of 1.1 million eligible test-taking students have been opted out from the Common Core-based tests, compared to 49,000 a year earlier. This caused Secretary Duncan to declare that if school districts cannot do it, the federal government “has an obligation to step in” to discipline states, school districts, and schools. If more than 5 percent of the students are opted out, districts and schools are being threatened with the imposition of various sanctions including the withdrawal of funding (see Patrick Wall, “As Opt-Out Numbers Grow, Arne Duncan Says Fed May Have to Step In,” Chalkbeat, April 21, 2015, http://ny.chalkbeat.org). Meanwhile, it is not just parents who are opting their students out of the new corporate-designed, profit-driven assessments in English and math, but students themselves. In April, at Nathan Hale High School in Seattle, every single eleventh grader boycotted the Common-Core standards test (“No Juniors Take Up SBAC at Seattle High School,” KING5, April 23, 2015, http://king5.com).

A key strategic objective of the new testing regime is to use the assessments as a means of teacher evaluation with the object of removing teachers and breaking teacher unions. Educators are themselves the target. Teachers across the country are being threatened not just with being fired but with prison terms if they interfere with Common-Core related tests. It is in this context that twelve black educators in Atlanta (teachers, principals, and administers) were tried and convicted as a group in April 2015 as co-conspirators under the Racketeering Influenced and Corrupt Organizations law, a local version of the federal super-conspiracy statute, usually seen as applicable only to drug dealers, gangsters, and mafia dons. Refusing to confess they were members of a conspiracy (the two from whom confessions were obtained in the end were given slaps on the wrist), ten of the educators were handed out long prison sentences: for three of the defendants, seven years; and for the rest, one to two years. Former Martin Luther King, Jr. aide (and former Mayor of Atlanta) Andrew Young spoke on their behalf during the trial. He told the judge that the real problem was the irrationality of the new standardized tests and the
dire social consequences of this onerous system. Young quoted King as saying: “When people are placed in darkness, crimes will be committed. The guilty are those who created the darkness” (“Nine Atlanta Educators in Test-Cheating Case Are Sentenced to Prison,” Washington Post, April 15, 2015, http://washingtonpost.com; “Show Trial Ends with Prison for Educators Who Wouldn’t Confess,” Hatuey’s Ashes, April 15, 2015, http://hatueysashes.blogspot.com).

This system is being extended from K–12 to colleges and universities. David Coleman, the private entrepreneur and non-educator, who is known as the “architect of the Common Core,” is now president of the College Board where he is helping to align the SATs and other assessments and college admittance procedures with the Common Core related tests—in order to restructure the entire U.S. education system from top to bottom.

One reason that this restructuring of U.S. education has been so hard to fight is that it has been difficult for defenders of public education to ascertain the networks and structures that are involved in the educational “reform” juggernaut—one being imposed simultaneously in every school district, every school, and every classroom in the country. Much of the critical decision-making has been done behind closed doors—with pseudo-public organizations, like the National Governors Association, which owns the copyright to the Common Core Standards, giving the whole enterprise an air of legitimacy. An inside player in this has been the Hoover Institution’s Eric Hanushek, who, with big money backers, has been promoted in countless quasi-public committee hearings as the national authority on “doing less with more”—falsely claiming, in the face of all genuine educational research, that neither class-size nor the amount of money spent per student have any appreciable effect on educational performance.

The good news is that the roles played by Gates, Coleman, Hanushek, Jeb Bush, and numerous others have now been thoroughly unmasked—in an invaluable book by Mercedes K. Schneider, A Chronicle of Echoes: Who’s Who in the Implosion of American Public Education (Information Age Publishing, 2014). In our estimation Schneider’s book is right at the top with Naomi Klein’s This Changes Everything as one of the crucial movement books of our time. Schneider has a new book coming out from Teachers College Press this month, Common Core Dilemma: Who Owns Our Schools?

Johan Rockström of the Stockholm Resilience Center is famous as the leading developer of the planetary boundaries analysis that defines a “safe operating space” for humanity, and which has achieved worldwide prominence in leading scientific journals, such as Nature and Science. A new article he has cowritten, “Planetary Boundaries: Guiding Human Development on a Changing Planet,” appeared in Science on February 13, 2015. In April, Rockström extended his analysis to address the scale of the social solutions required in an article for the Great Transition Initiative (GTI) called “Bounding the Planet: Why We Need a Great Transition” (http://greattransition.org). MR editor John Bellamy Foster was one of those invited to be part of a pre-publication discussion of Rockström’s article, and his commentary piece was published on the GTI webpage simultaneously with Rockström’s. A link to Rockström’s piece,
Foster’s commentary, and a short introduction by Ian Angus can be found at “What Strategy for an Ecological ‘Great Transition’?” on the Climate and Capitalism website (http://climateandcapitalism.com).

With the death of Eduardo Galeano on April 13, 2015, Monthly Review, Monthly Review Press, and the world as a whole lost one of its greatest writers and fighters for social justice. Galeano will always be remembered for his most celebrated work, Open Veins of Latin America, the English edition of which was published by Monthly Review Press. In her foreword to the 1997 edition, Isabelle Allende wrote: “After the military coup of 1973 I could not take much with me: some clothes, family pictures, a small bag of dirt from my garden, and two books: an old edition of the Odes by Pablo Neruda and the book with the yellow cover, Las Venas Abiertas de América Latina.” Monthly Review Press also published Galeano’s Days and Nights of Love and War. In remembering him here we would like point to the famous line in the concluding paragraph of Open Veins, which we believe encapsulates the meaning of his lifework and his life itself: “All memory is subversive, because it is different, and likewise any program for the future.”

Correction: In the first paragraph of the Notes from the Editors in the May 2015 issue it mistakenly said that the first American to be killed in combat in Vietnam died in 1946. It should have said 1945.