Dear Reader, we make this and other articles available for free online to serve those unable to afford or access the print edition of Monthly Review. If you read the magazine online and can afford a print subscription, we hope you will consider purchasing one. Please visit the MR store for subscription options. Thank you very much. —Eds.
Notes from the Editors
by The Editors
(Oct 01, 2015)
Topics: Imperialism Labor Places: Asia China Indonesia 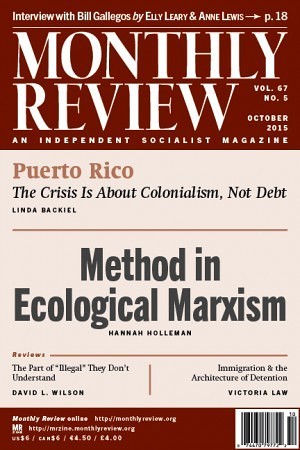 Fifty years ago this month, beginning in early October 1965 and extending for months afterwards, the United States helped engineer a violent end to the Communist Party of Indonesia (PKI). Between 500,000 and a million Indonesians were killed by conservative factions of the military led by General Suharto and by right-wing Muslim youth—all with the direct involvement of the CIA, the close cooperation of the U.S. Embassy and State Department, and the guidance of the Johnson administration’s National Security Council. As U.S. historian Gabriel Kolko wrote, based on evidence revealed by declassified documents:

The “final solution” to the Communist problem in Indonesia was certainly one of the most barbaric acts of inhumanity in a century that has seen a great deal of it; it surely ranks as a war crime of the same type as those the Nazis perpetrated. No single American action in the period after 1945 was as bloodthirsty as its role in Indonesia, for it tried to initiate the massacre, and it did everything in its power to encourage Suharto, including equipping his killers, to see the physical liquidation of the PKI was carried through to its culmination. Not a single one of its officials in Washington or Djakarta questioned the policy on either ethical or political grounds….

At the beginning of the following April the CIA estimated roughly 250,000 deaths in a party of 3 million and 12 million front group members. By the end of the month it dismissed the government’s claim of 78,000 dead and thought 250,000 to 500,000 closer to reality. But an “accurate figure is impossible to obtain,” the CIA concluded. A State Department estimate that year placed the figure at roughly 300,000. A number former ambassador [Howard P.] Jones employed when he published his memoirs five years later—though he, too, did not exclude 500,000. Other estimates range up to 1 million dead, and official Indonesian data released a decade later gave 450,000 to 500,000 as the number killed. As stunning as these figures are, not a single official U.S. document dealing with them has ever expressed dismay or regret!

The number of people imprisoned is somewhat more precise. At the peak, there were 150,000 to 200,000 of them, the CIA reported. Ten years later, Amnesty International estimated there were still 55,000 political prisoners, though others thought nearly twice that more accurate. (Gabriel Kolko, Confronting the Third World [New York: Pantheon Books, 1988], 180–81)

In the words of the American film director Joshua Oppenheimer, who made the Oscar-nominated 2012 documentary The Act of Killing about the 1965 genocide:

The United States provided the special radio system so the [Indonesian] Army could coordinate the killings over the vast archipelago. A man named Bob Martens, who worked at the United States Embassy in Jakarta, was compiling lists of thousands of names of Indonesian public figures who might be opposed to the new regime. [Suharto’s New Order] and handed these lists over to the Indonesian government. (“Joshua Oppenheimer Won’t Go Back to Indonesia,” New York Times, July 9, 2015)

In forthcoming issues of Monthly Review we are planning to publish work on the Indonesian genocide, which, alongside the Vietnam War, constitutes a major turning point in the history of Southeast Asia in the period, and one of the most brutal acts of mass carnage inflicted by imperialism in the twentieth century. The dire implications of this carry down to the present day.

Monthly Review Press has just published Laurence H. Shoup’s new book Wall Street‘s Think Tank: The Council on Foreign Relations and the Empire of Neoliberal Geopolitics, 1976–2014. This indescribably powerful new study is the long-awaited sequel to The Imperial Brain Trust, written about the Council on Foreign Relations, by Shoup and William Minter in 1977. As Noam Chomsky writes, Shoup’s new book carries “their inquiry forward with a very revealing account of how a small group of planners drawn from sectors of concentrated private and state power, closely linked, along with ‘experts’ who are congenial to their ends, have set the contours for much of recent history, not least the neoliberal assault that has had a generally destructive impact on populations while serving as an effective instrument of class war. A welcome and very valuable contribution.” Those interested in obtaining a copy may go to https://monthlyreview.org/books/cl5519.

Partly in response to U.S. reports on human rights in China and other countries, in June 2015 Beijing released its own lengthy report, “Human Rights Record of the United States in 2014.” Full of incontrovertible facts and fully documented, it provides a searing look into the human rights situation in the United States. For example, in the section “On Violations of Human Rights in Other Countries,” it documents in detail CIA torture as well as National Security Agency surveillance of countries around the world. On warfare, it refers to the “frequent use of drones producing massive civilian casualties in other countries. Statistics showed that as of November 24, 2014, U.S. drones claimed the lives of 1,147 people in attacks against 41 persons, which meant the death of 28 civilians including women and children to kill every ‘bad guy’ the U.S. went after…. In Yemen, U.S. drone killing and air strikes killed [an] estimated 753 to 965 people, including at least 81 civilians, from the beginning of 2014 to mid-April.” Beijing also notes that the United States continues to deny the right of development as a human right, and in September 2014, when a draft resolution to that effect was put before the United Nations Human Rights Council, the United States was the sole nation to oppose it. Thirty-four years after it signed the Convention on the Elimination of all Forms of Discrimination Against Women, and nineteen years after it signed the Convention on the Rights of the Child, the United States has not yet ratified either treaty.

With respect to police violence in the United States, the Chinese report observed:

The Wall Street Journal reported on December 3, 2014, that many of the law enforcement agencies did not submit the statistics about killings by police…to the FBI. The report found that at least 1,800 police killings took place in 105 police departments between 2007 and 2012. The Associated Press reported on December 14, 2014 that at least 400 deaths happened every year as a result of law enforcement activities by the U.S. police officers, most of who were not prosecuted. And some police officers had repeated killings on record, though they were investigated for every case. There were 55 police officers who were sued at least 10 times with one being sued 28 times. [The] Los Angeles Times reported on September 14 that since 2004 a committee reviewed 809 complaints of excessive force or misconduct on the Southwest border, but no police officers had been punished.

The United States, the report notes, had 1,574,700 prisoners on December 31, 2013—an increase of more than 4,000 from the previous year. With respect to economic conditions, the report examined unemployment, underemployment, poverty, and homelessness. “Nearly one in five New Yorkers, 1.4 million people, relied on food pantries and soup kitchens across the city to eat. That represented an increase of 200,000 people in five years.”

Even recognizing that there is a sort of tit for tat going on between Washington and Beijing over human rights, the Chinese report on U.S. human rights raises major issues. The full report in English can be obtained at Xinhuanet at http://news.xinhuanet.com/english/china/2015-06/26/c_134357934.htm.

In August 2015 Monthly Review Associate Editor Michael Yates was interviewed by Juan Cruz Ferre on Left Voice in a piece entitled “Labor Needs to Get its Own House in Order Around Race.” Here is a brief excerpt:

JCF: You said one of the reasons for the demise of the labour movement was the failure of unions to address racial and gender oppression. How do you think organized labour should intervene in Black Lives Matter?

MY: It is not so much a question, I think, of intervening, but of developing strong anti-racist efforts within unions, complete with education of members and support for what Black Lives Matter and other anti-racist and black liberation struggles are doing. By support I mean just that, and not attempts to co-opt or lead such movements. Black union members will play a pivotal role in any of this. And really, labour needs to get its own house in order about race before it can do anything that is credible. For example, why is it that the AFL-CIO does not come out with a super strong campaign, complete with press conferences, political agitation, demonstrations, and whatever else creative leaders can come up with to force upon the nation the necessity of bringing to fruition the long unfinished business of black liberation…. Wouldn’t it be nice to see [President of the AFL-CIO] Richard Trumka speak out with passion and conviction for prosecution of police who kill black men and women? To say that he will lead a demonstration in the town when the next murder occurs? To call a one-day general strike to call national attention to the terrorism perpetrated every day against black communities? To rebuke publicly the leaders of prison guard unions that are complicit in the brutality of the prison system? How else to have any credibility in minority communities and with those who lead black liberation struggles?

Much of what I have just said can be applied to gender oppression too.

The entire interview can be obtained at Labor Voice: http://leftvoice.org/Labor-Needs-to-Get-Its-Own-House-In-Order-Around-Race

Correction: The first page of the September 2015 “Notes from the Editors” states that Larry Shoup’s article “‘Dangerous Circumstances'” is “a chapter from his new Monthly Review Press book.” In fact, it is a separate article.