Dear Reader, we make this and other articles available for free online to serve those unable to afford or access the print edition of Monthly Review. If you read the magazine online and can afford a print subscription, we hope you will consider purchasing one. Please visit the MR store for subscription options. Thank you very much. —Eds.
Notes from the Editors
by The Editors
(Nov 01, 2015)
Topics: Imperialism Marxism War Places: Americas Middle East Syria United States 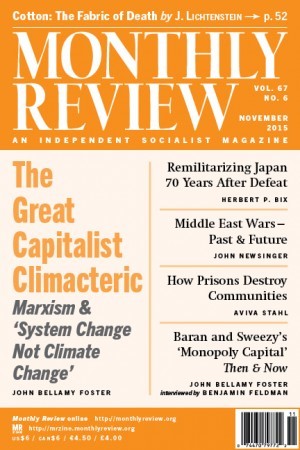 To understand why the Middle East is now in shambles, with the United States currently involved simultaneously in wars against both the Assad government in Syria and the Islamic State in Iraq, generating the greatest refugee crisis in Europe since the Second World War, it is necessary to go back almost a quarter-century to the 1991 Persian Gulf War. The Gulf War, unleashed by the United States in response to Iraq’s invasion of Kuwait, was made possible by the growing disorder in the USSR followed by its demise later that same year. The USSR’s disappearance from the world stage allowed the United States to shift to a naked imperialist stance—though justified in the manner of the colonial empires of old as “anti-terrorism” and “humanitarian intervention”—not only in the Middle East, but also along the entire great arc that had constituted the perimeter of the former Soviet Union. (This formed the thesis of MR editor John Bellamy Foster’s Naked Imperialism in 2006.)

The new U.S. grand imperial strategy was most forcefully articulated by then-Undersecretary of Defense Paul Wolfowitz, who, in May 1991, told General Wesley Clark: “We learned that we can intervene militarily in the [Middle East] region with impunity and the Soviets won’t do a thing to stop us…. [W]e’ve got about five to ten years to take out these old Soviet ‘surrogate’ regimes—Iraq, Syria, and the rest—before the next superpower comes along to challenge us in the region.” (General Wesley K. Clark, Don’t Wait for the Next War [New York: Public Affairs, 2014], 37–40). A decade later the United States invaded Iraq, together with Afghanistan—utilizing the 2001 attack on the World Trade Center as its justification. In 2011 the United States (and NATO as a whole) took advantage of the Arab Spring protests to attack Libya, destroying the regime there under Qaddafi, while fostering a civil war in Syria with the goal of toppling the Assad government. Continuous drone warfare has been directed from the White House under Obama, with thousands of targeted killings (assassinations plus “collateral damage”) throughout the region. On top of all this, the United States has long adopted a policy of promoting militant “political Islam” as a way of thwarting nationalist and radical movements and governments in the region. (See Samir Amin, “Political Islam in the Service of Imperialism,” Monthly Review, December 2007.)

The new threat of the Islamic State arose in the midst of the general desolation resulting from U.S. “regime change” in the region. Although the United States was unable to create stable imperial client states, it did succeed in its primary objective of gaining greater ascendancy over the region and its “strategic resources” (a term used as a code for oil in all discussions of the region). However, the growing chaos that this produced now threatens even these hard-won imperial spoils. This is so much the case that Richard Haass, president of the Council on Foreign Relations, and a major figure in articulating what he called the “Imperial America” strategy in the opening years of this century, has labeled the breakdown in the Middle East “The New Thirty Years’ War”—referring back to the period of internecine conflict in Europe in the seventeenth century. Such are the fruits of the period of naked imperialism. (See Richard Haass, “The New Thirty Years’ War,” Foreign Affairs, November–December, 2014).

The Review of the Month in this issue of Monthly Review is from a keynote address that John Bellamy Foster delivered in September at the Manifesta gathering in Ostend, Belgium where a central theme was the climate talks to take place in Paris in December. Another keynote speaker at Manifesta was Vandana Shiva, who spoke on the relation of agriculture to climate change. Manifesta in Belgium is organized each year by the Belgian Workers’ Party, an anti-imperialist Marxian political party which arose out of the student movement of the 1960s. It has obtained considerable electoral success in Belgium as a whole, both Flemish and Walloon, and has had two deputies elected at the federal level, and six at the regional levels. Its dynamic youth movement is active in all the universities in the country. It places a heavy emphasis on ecological issues and has adopted the slogan “Red is the New Green.”

We are very pleased to announce a new Spanish-language edition of Monthly Review published in Spain, consisting of translations of select articles from MR. This journal has been explicitly organized as “the third period” of the earlier Spanish versions of Monthly Review, with links to the earlier editions. The first issue, now out, is devoted to The Metamorphosis of Work. The website for the new journal is http://monthlyreview.es (a link has been established from the MR webpage). In addition, a twitter account @MonthlyRevCaste has been created, together with a Facebook page: http://facebook.com/monthlyreviewcastellano. Those wishing for more information may contact Sandra Ezquerra Samper at sandra.ezquerra [at] uvic.cat.

In August 2015 the International Institute of Social History (IISH), which since 1938 has housed the original Marx-Engels archives, announced that the entire set of Marx-Engels papers, many of which have not yet been published, are now available in digitalized form and can be browsed and downloaded as pdf files. In order to access these documents go to the IISH website (at https://socialhistory.org/en/news/marx-engels-papers-completely-available-online) and follow the links indicated there. Although this provides universal access to the Marx-Engels papers, reading them is difficult, since as the IISH states, “Marx’s handwriting in particular is virtually illegible,” and requires much patience and even training to decipher. Nevertheless, many will find it thrilling to be able to view these documents. Moreover, it is possible to see clearly what works Marx and Engels were reading, and to ascertain the overall scope of their intellectual project.

The story of how Marx and Engels’s papers (and particularly Capital) ended up at the IISH is a dramatic tale, which Karl Kautsky compared to the Nibelungenlied as rendered in Wagner’s Ring Cycle. By 1901 the papers, which Engels had left with a handful of family members and friends, had all been acquired with difficulty by the German Social Democratic Party. With Hitler’s rise to power the manuscripts were threatened. They were hidden in wallpaper and then smuggled out of Germany at great risk and transported in backpacks and in folding boats to Copenhagen. The German Social Democratic Party in refuge in Paris felt compelled to offer the manuscripts for sale, and the most likely purchaser was the Marxism-Leninism Institute in Moscow, but at the last moment in the negotiations the Russian delegation headed by Nikolai Bukharin was called back to Moscow, where Bukharin was to be imprisoned and executed by Stalin. The collection was subsequently bought by the IISH, and was kept in England during the war. The original manuscript of volume 1 of Capital however had remained with the publisher Meissner in Hamburg, and was destroyed by the British Royal Air Force in July 1943 in the heavy bombing of Hamburg (operation Gomorrah), which created a firestorm that engulfed the city, with deaths of over 40,000 people. Meissner’s office and all the documents were destroyed. For a full account see IISH, “Itineraries of Capital,” https://socialhistory.org/nl/node/3804/.

As this issue of MR was going to the press, we learned of the death of our friend and long-time MR author Grace Lee Boggs, age 100. Grace wrote, with her husband James Boggs, Revolution and Evolution in the Twentieth Century (Monthly Review Press, 1974). Her classic essay “Education: The Great Obsession” appeared in MR in September 1970 and was reprinted in the special July–August 2011 issue on education. Also in 2011 she published her important book, The Next American Revolution. Grace was a long-time organizer in Detroit and a lifelong advocate for socialism and race, gender, and class equality. We plan to honor her and her work in future issues of MR.