Dear Reader, we make this and other articles available for free online to serve those unable to afford or access the print edition of Monthly Review. If you read the magazine online and can afford a print subscription, we hope you will consider purchasing one. Please visit the MR store for subscription options. Thank you very much. —Eds.
Notes from the Editors
by The Editors
(Dec 01, 2015)
Topics: Imperialism Marxism Socialism War Places: Americas Asia Indonesia United States 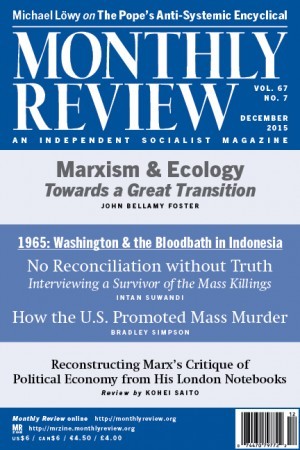 In this issue we feature two articles on the 1965–1966 mass killings and imprisonments in Indonesia. The army-led bloodbath was aimed at the near-total extermination of members of the Indonesian Communist Party (PKI), then a highly successful electoral party with a membership in the millions. The organized killing, in the words of Noam Chomsky and Edward S. Herman in The Washington Connection and Third World Fascism, constituted “one of the most extensive and brutal slaughters in human history.” In all, an estimated 500,000 to a million (or more) people were murdered. Another 750,000 to a million-and-a-half people were imprisoned, many of whom were tortured. Untold thousands died in prison. Only around 800 people were given a trial—most brought before military tribunals that summarily condemned them to death (Noam Chomsky and Edward S. Herman, The Washington Connection and Third World Fascism [Montreal: Black Rose Books, 1979], 205–17).

Intan Suwandi’s interview in this issue of MR with Tan Swie Ling, a prominent survivor of the bloodbath, provides a much-needed Indonesian perspective on the mass carnage, imprisonment, and torture—as well as on peoples’ continuing capacity to resist. It is useful here, though, to add something to Suwandi’s brief note in her introduction on the complicity of the U.S. media in the face of the mass killings. In its July 15, 1966, issue, Time magazine devoted a nine-page article, entitled “Vengeance with a Smile,” to the mass killings in Indonesia. The bloodletting, it said, “almost unnoticed took 400,000 lives.” Using a rhetoric drawing upon the genocidal treatment of Native Americans, Time declared, “during the eight months the terror lasted, to be a known Communist was usually to become a dead Communist.” Lest this be seen as deplorable, it quickly reassured its readers that “there was little remorse anywhere. ‘The Communists deserved the people’s wrath,’ said Hadji Makrus Ali, 57, the Kiai (Imam) of Kediri (pop. 250,000), a town that was about 60% Communist” before the killings. Time described the piling up of bodies as the result of an immense, popular, frenzied slaughter—”an orgy of flashing knives and coughing guns.” It had, however, the virtue that the unrestrained murdering of countless unarmed civilians—many simply clubbed to death or decapitated—had completely rid the country of a Communist Party of millions. The new military regime under Suharto, Time declared in the very midst of the carnage, was “scrupulously constitutional.” It pointed out that the regime had “formally outlawed any form of Marxism,” thereby giving a kind of legitimacy to the violence. The final solution instituted in Indonesia (the reason for the “Smile” in the article’s title), Time informed its readers, had already led to a “Chain Reaction of Peace” in Asia—this near the height of the Vietnam War, which was to continue for almost another decade. It was, Time concluded, “the West’s best news for years in Asia.”

Time was not alone in greeting the developments in Indonesia with a smile. Liberal columnist James Reston entitled his June 19, 1966, New York Times column, featuring the rise of Suharto in Indonesia, “A Gleam of Light in Asia.” While indicating that a “massacre” had taken place, Reston was careful to avoid any details, refraining from so much as mentioning the hundreds of thousands of people killed, the mass graves in which their bodies were deposited, and the countless numbers languishing in prison without trial. Rather he was concerned chiefly with congratulating the United States for a successful operation, the triumph of which, he indicated, should be directly acknowledged despite all the care Washington officials had taken “not to claim any credit for this change.” Giving credit where credit was due, Reston pointed out that “it is doubtful” that “the coup [Suharto’s rise to power] would ever have been attempted without the American show of strength in Vietnam or been sustained without the clandestine aid it has received indirectly from here.” Twelve years later, George McArthur, the Saigon bureau chief for the Los Angeles Times, using an age-old propaganda technique, turned things around completely for the benefit of posterity, claiming in a November 15, 1978, article that the members of the Indonesian Communist Party—the unarmed civilian victims of the mass extermination who were killed in the hundreds of thousands—had themselves “subjected the country to a bloodbath.”

All of this was meant to obscure or justify the reality that the U.S. response to the Indonesian slaughter was, as Bradley Simpson notes, nothing less than “enthusiastic.” Washington, which was party to these developments from the beginning, gladly extended a helping hand in what it regarded as a constructive process of the killing en masse of Indonesian Communists—but it sought at all times to do so covertly so as to be able to maintain the official pretense of a lack of direct involvement. Nevertheless, Washington’s motives and involvement were clear. As Bradley Simpson has documented elsewhere, U.S. National Security Advisor McGeorge Bundy wrote to President Lyndon Johnson in October 1965 that the successful mass extermination of PKI members in Indonesia then taking place was “a striking vindication of our policy.”

The Review of the Month in this issue, “Marxism and Ecology: Common Fonts of a Great Transition,” by MR editor John Bellamy Foster, was originally published online in October 2015 by the Great Transition Initiative at http://greattransition.org/publication/marxism-and-ecology. Published alongside it were a number of comments on the essay by David Barkin, Michael Brie, Hannah Holleman, Tim Jackson, Giorgos Kallis, Kent Klitgaard, Ashish Kothari, Fred Magdoff, and Rasigan Maharajh, together with a response by Foster. The Great Transition Initiative is an online forum and international network dedicated to promoting critical visions of a transition to enriched human development, collective solidarity, and ecological resilience. It has its origins in 1995 in the Great Scenario Group, which in 2002 released its important essay The Great Transition (see the discussion in John Bellamy Foster, The Ecological Revolution [New York: Monthly Review Press, 2009], 253–64). In 2003 the Great Scenario Group was transformed by the Tellus Institute into an international forum, formally constituting the Great Transition Initiative, now directed by Paul Raskin, with Jonathan Cohn as managing editor. It operates as an online journal as well as a transnational network, publishing a rolling series of invited essays on various conceptions of the Great Transition, together with commentaries on the essays, and reviews of important works. More information may be found at http://greattransition.org/about/aims-and-background.

Rosalyn Baxandall, feminist activist, historian, and Monthly Review author, died on October 13, 2015. She was seventy-six. Baxandall played an important role in the early feminist movement in New York in the 1960s and was a member of New York Radical Women and Redstockings. As a professor of American Studies at the State University of New York at Old Westbury, she published, with Linda Gordon and Susan Reverby, the famous documentary history America’s Working Women. That same year Baxandall, along with Gordon and Elizabeth Ewen, contributed a classic article, “The Working Class Has Two Sexes,” for the special July-August 1976 issue of Monthly Review on “Technology, the Labor Process, and the Working Class.” Baxandall later wrote an important biography, Words on Fire, of Elizabeth Gurley Flynn. Her last written work was a book review, entitled “An Anti-Imperialist Feminist’s Tale,” for the September 2015 issue of MR. In that review she noted that “most of the great advances in women’s lives have come from the women’s liberation movement, not from women in the university.” Yet she observed that many women professors, such as Sara Evans, Linda Gordon, and Marlene Dixon, “were also activists in the women’s liberation movement. Their activism in the late 1960s and ’70s was essentially outside the university,” but they brought their knowledge and experience to bear on the struggles in which they were engaged. It was to this group of dedicated activists who were also professional educators, and who fought for women’s liberation in all that they did, that Baxandall was proud to belong.

Peter Custers, author of the landmark Capital Accumulation and Women’s Labor in Asian Economies (Monthly Review Press, 2012) died at his home in the Netherlands on September 3, 2015. He was sixty-six. Custers was a major writer on political economy, imperialism, militarism, and peace. He was especially noted for his scholarship and activism in relation to South Asia. His book Questioning Globalized Militarism (Merlin Press, 2008, with a foreword by Samir Amin), was in the tradition of Marx’s Capital, Paul Baran and Paul Sweezy’s Monopoly Capital, and Amin’s Imperialism and Unequal Development. It introduced the key concept of “negative use value,” in relation to military goods in particular. His article “A Different Perspective on the U.S.-India Nuclear Deal” appeared in the September 2009 issue of MR.

Percy Brazil, a longtime director (together with his second wife Gladys Brazil) of the Monthly Review Foundation, died at age ninety on October 23, 2015. Brazil was born in Glasgow and attended medical school at the University of Glasgow before emigrating to New York, where he was to practice internal medicine and where, in the 1980s, he became president of the medical staff at Phelps Memorial Hospital. Brazil was very active in socialist circles and causes. He wrote two articles for MR, “Remembering Daniel Singer” (February 2001) and “A Man for All Seasons” on Carl Marzani (February 2005). He was proud of the political company he kept, writing in his piece on Marzani about his recently deceased friends Angus Cameron, Daniel Singer, and Paul Sweezy. Later he and Gladys would also write of their memories of Harry Magdoff for MRzine in “A Threnody for Harry” (January 1, 2007). In the case of all of these individuals, he stated, “what they had in common was a core which they all shared, and that core, the very essence of their being, is the soul of socialism.” Percy Brazil too was made in this mold.

Correction: In the Notes from the Editors to the October 2015 issue of MR, line 4 of the bottom paragraph on the inside back cover mistakenly read “CIA” where it should have read “Council on Foreign Relations.”

Marxism and Ecology
Marx the Feminist?