Dear Reader, we make this and other articles available for free online to serve those unable to afford or access the print edition of Monthly Review. If you read the magazine online and can afford a print subscription, we hope you will consider purchasing one. Please visit the MR store for subscription options. Thank you very much. —Eds.
Notes from the Editors
by The Editors
(Jan 01, 2016)
Topics: Economic Theory Political Economy Stagnation Places: Global 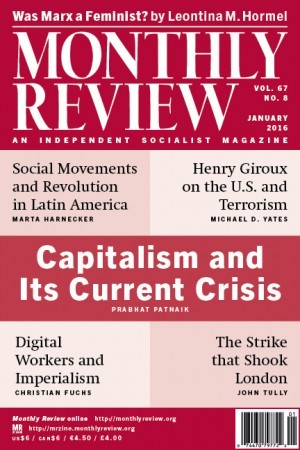 Prabhat Patnaik’s Review of the Month in this issue addresses problems of economic stagnation and imperialism in the context of explaining the current global crisis. Patnaik is part of a broad tradition of Marxian thought and heterodox economic analysis more generally that has long focused on issues of economic stagnation under monopoly capitalism. Such questions are now finally being taken up even by orthodox economists, but in ways that systematically ignore decades of contributions in this regard made by heterodox theorists. Ever since Larry Summers raised the issue of secular stagnation (referring back to Alvin Hansen’s theory of the 1930s and ’40s) at an IMF meeting in 2013, the question of stagnation has become part of a worldwide economic debate, moving issues that were once on the margins to center stage. This has resulted in a proliferation of mainstream economic treatments of the history of the secular stagnation concept in the 1930–1950s period, after which mainstream economists had essentially declared the issue dead.

Nearly all of these current orthodox (i.e., neoclassical) analyses of the history of stagnation theory turn a blind eye to the role of Marxian and heterodox thinkers, who have been developing the stagnation thesis in great historical and theoretical detail for more than half a century, building on the debates of the 1930s. This has particularly been the case in Monthly Review, and in the work of such theorists as Michał Kalecki, Josef Steindl, Paul A. Baran, Paul M. Sweezy, and Harry Magdoff—among the most noted dissenting economists of the twentieth century. The concept of stagnation (or secular stagnation) has undoubtedly appeared more frequently and been analyzed in greater detail in MR than any other publication in the world over the last sixty years, as part of a running cri-tique of capital accumulation.

Yet in most current orthodox economic discussions of the topic, Monthly Review is seldom mentioned. This is not due to any ignorance of MR‘s contributions. For example, when we asked Larry Summers not long ago whether he was at Sweezy’s talk on “Why Stagnation?” at Harvard in 1982, the first answer we got back from him was that he might have been, followed almost immediately by another answer from his staff that he probably was not. Yet it was clear from the nature of the response that Summers was aware of Sweezy’s ideas (“Notes from the Editors,” MR, October 2014). In a November 23, 2015, online article entitled “Printing Money,” The New Yorker‘s talented economic columnist John Cassidy observed that the “phrase of the moment” is “secular stagnation,” and that “Lawrence Summers resurrected it a couple of years ago.” No mention is made of Sweezy and other thinkers on the left, although Cassidy is well aware, as his earlier book How Markets Fail (2009) showed, of Sweezy’s stagnation argument and its importance.

One of the sharpest criticisms of this failure of conventional economists to acknowledge, much less address, decades of radical economic work in this area is provided by the accomplished heterodox economist Steve Keen, author of Debunking Economics (2011):

When Larry Summers first made his secular stagnation speech at the IMF, and the American economics tribe heralded it as if it were the greatest (and latest) thing since sliced bread, my irony gene went into overload….The argument that the West has been suffering from secular stagnation, and that only a series of financial bubbles have kept the illusion of prosperity going, has been part of non-orthodox economics for over three decades…

Of course mainstream economists could never acknowledge the prior arguments of a rival intellectual tradition, but now that Larry (peace be upon him) Summers has said it, suddenly it’s OK to spout what the leftists have been saying for 30 years (though with different explanations, of course—it’s declining population growth and falling levels of innovation, not nasty transnationals relocating production, or financialization of the economy [eroding] the industrial sector). (“Secular Stagnation III,” January 8, 2014, http://debtdeflation.com)

But our favorite commentary on this failure of orthodox economists to acknowledge decades of penetrating left analyses of stagnation comes from Charles Mudede, one of the most creative, insightful, and prolific left cultural critics in the United States today. In his November 21, 2013, blog post, “What If Economists for Once Give Marxists Some Fucking Credit?,” for Seattle’s weekly The Stranger, Mudede wrote:

The thing that drives me up the wall is when mainstream economists (meaning neoclassical economists), after years and years of pushing a bad idea on the public and students, turn to, when finally admitting that their bad idea is really a bad idea, and claim a good idea that they ignored and kept on the fringes. [Paul] Krugman’s recent post [on secular stagnation] serves as an excellent example.… Though it’s about the idea of how the current recession (or stagnation) could be the “new normal,” it…makes no mention of the long and rich research on this very subject by Marxists (most notably the late Paul Sweezy) at the Monthly Review.

Since the 1970s, the Monthly Review has produced a solid body of work that places stagnation at the center of the capitalist system. It is, these Marxists argue, not the exception but the true state of things. Capitalism may begin with a bang of economic growth, but it always reaches a point where profits are weak and demand low. The way out of this problem in the ’30s was war. In the ’70s, it was financialization of the economy…. Financialization…was not tied to growth or expansion in the real economy. It instead absorbed the stagnation problem and transformed economic growth into debt accumulation. One must remember that in 1950, private debt in the U.S. was actually lower than government debt. Private debt rapidly increased in the ’70s and exploded in the ’80s and ’90s. (http://slog.thestranger.com)

Mudede’s blog posts, by the way, are among the best cultural inoculations we know to the liberal virus. Here it is sufficient to mention some of his titles: “Private Schools Are Not the Solution“; “The Politics of Mathematics in Economics“; “White Men Do Not Like Public Transportation“; “Black Men Doing Time Is Now as Natural as Sunshine“; “Greece Is Being Forced to Do What the Germans Have Rejected: Privatize Water.” (All of these and many more can be found on http://thestranger.com/.)

We were pleased to learn this fall that Tamás Krausz’s Reconstructing Lenin: An Intellectual Biography (Monthly Review Press, 2015) won the 2015 Deutscher Memorial Prize (named after Isaac and Tamara Deutscher). The prize is given each year to a book that the Deutscher jury considers to exemplify the best and most creative new writing in relation to the Marxian intellectual and political tradition. MR authors who have won the Deutscher Prize in prior years include István Mészáros (1970); G.E.M. de Ste Croix (1982); Ellen Meiksins Wood (1986); Teodor Shanin (1987); Boris Kagarlitsky (1988); Terry Eagleton (1989); Arno J. Mayer (1990); Harvey J. Kaye (1993); Justin Rosenberg (1994); Eric Hobsbawm (1995); Peter Gowan (2000); Michael Lebowitz (2004); Kees van der Pijl (2008); David Harvey (2010); David McNally (2012); and Sam Gindin and Leo Panitch (2013). Nevertheless, the 2015 prize for Krausz’s Reconstructing Lenin represents the first time that a Monthly Review Press book has received the Deutscher Prize—an accomplishment of which we are proud. Krausz’s book is an extraordinary attempt to contextualize Lenin’s theory and practice in the historic struggles and debates of his time. In István Mészáros’s words, it is “a work of exemplary scholarship, written with penetrating insights and steadfast commitment. With richly documented attention to detail it illuminates the formation and much-disputed impact of Lenin’s immense lifework in their historical setting, highlighting at the same time their enduring significance for the prospects of socialist development.” Readers of Krausz’s book will be surprised by what his adept use of the historical method allows him to reveal in relation to all the major historical themes associated with Lenin’s approach to revolution and socialism.

In addition to being the author of Reconstructing Lenin and Professor of Russian History at Eötvös Loránd University of Sciences in Budapest, Krausz is also president of the editorial board of Eszmélet, the only Marxist theoretical and political quarterly in Hungary. The latest issue, number 107, includes a translation of MR editor John Bellamy Foster’s “Chávez and the Communal State” from the April 2015 issue of MR, along with an article on equality and democracy by Mészáros—as well as a picture of Mészáros on the cover to celebrate his 85th birthday. Happy Birthday, István!

Leontina M. Hormel, whose review “Marx the Feminist?” appears in this issue of MR, has recently assumed the position of chair-elect of the Marxist Sociology Section of the American Sociological Association. She will take over next year from Brett Clark, the chair of the Marxist Section since August 2015. Clark is a member of the MR editorial committee and co-author with John Bellamy Foster and Richard York of The Ecological Rift: Capitalism’s War on the Planet (Monthly Review Press, 2010). Congratulations to both Leontina and Brett!

In this issue we are pleased to publish a 1931 radio broadcast, entitled “No Vacation from Politics,” by the twenty-one-year-old Paul A. Baran, presented on the brink of Hitler’s rise in Germany. As Nicholas Baran, Paul Baran’s son and the talk’s translator, notes, it aired on a Breslau radio station at a time when the elder Baran was associated with Institute for Social Research in Frankfurt. We think the broadcast is of enduring interest for its conception of the growing and necessary politicization of the human relation to the social and natural environment; its accounts of ideological controls aimed at the depoliticization of the working class; and the insights that it provides into Baran’s early development, decades before he wrote his masterworks, The Political Economy of Growth (1957) and, with Paul M. Sweezy, Monopoly Capital (1966), both published by Monthly Review Press. This talk demonstrates the intellectual maturity at a young age of one of the great Marxian political economists of the twentieth century.

Correction: In John Bellamy Foster’s “Capitalism and the Great Climacteric” (November 2015), on page 10, the third line of the fifth paragraph read “six broad conclusions” where it should have read “five.”