Dear Reader, we make this and other articles available for free online to serve those unable to afford or access the print edition of Monthly Review. If you read the magazine online and can afford a print subscription, we hope you will consider purchasing one. Please visit the MR store for subscription options. Thank you very much. —Eds.
Notes from the Editors
by The Editors
(Apr 01, 2016)
Topics: Economic Theory Political Economy Stagnation Places: Global 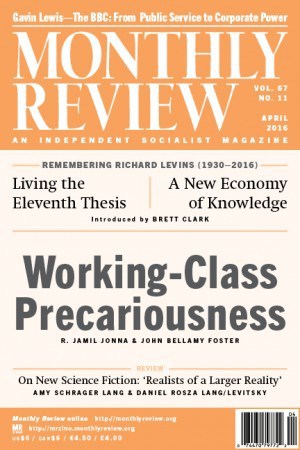 The March/April 2016 issue of Foreign Affairs, published by the Council on Foreign Relations, is devoted in large part to the topic of economic stagnation. The editorial by Jonathan Tepperman, the journal’s managing editor, declares: “Today, with China slumping, energy prices collapsing, and nervous consumers sitting on their hands, growth has ground to a halt almost everywhere, and economists, investors, and ordinary citizens are starting to confront a grim new reality: the world is stuck in the slow lane and nobody seems to know what to do about it.” This is followed by eight articles on stagnation, only one of which, however—”The Age of Secular Stagnation” by Lawrence H. Summers—is, in our opinion, of any real importance.

Summers argues that secular stagnation (often referred to simply as stagnation) has arisen from “an increasing propensity to save and a decreasing propensity to invest. The result is that excessive saving acts as a drag on demand, reducing growth and inflation, and the imbalance between savings and investment pulls down real interest rates” to a point close to zero. “When significant growth is achieved, meanwhile—as in the United States between 2003 and 2007—it comes from dangerous levels of borrowing that translate excess savings into unsustainable levels of investment (which in this case emerged as a housing bubble).” Summers states: “The core problem of secular stagnation is that the neutral real interest rate [the point at which savings and investment are equilibrated] is too low,” resulting in an underemployment equilibrium. What all of this means is that “the main constraint on the industrial world’s economy today is on the demand rather than the supply side.” In other words, the problem is weak effective demand, rather than high unit labor costs and excessive raw material and energy prices. Net federal investment in infrastructure, he adds, “is running close to zero” (2–3, 7).

Summers heavily criticizes those like Robert J. Gordon, in The Rise and Fall of American Growth (2016), who attribute stagnation to supply-side “headwinds” (for example, structural conditions resulting in declining educational attainment) blocking productivity growth. For Summers deflation tendencies, massive capital savings, and mountains of corporate cash refute Gordon’s thesis. Likewise Summers dispatches those like Kenneth Rogoff who see stagnation as merely the product of a debt supercycle associated with periodic financial crises. Such theorists, Summers argues, put the cart before the horse, since it was the excess of savings (surplus) that led to the emergence of stagnation, while the financial bubbles that have appeared with ever greater frequency and severity are a secondary outgrowth of excess savings and stagnation, artificially inflating the economy until the they burst.

Despite such sharp criticisms of other mainstream interpretations of stagnation, Summers’s own analysis can be faulted for being superficial and vague, lacking historical concreteness. His argument on demand-side constraints tends to ignore the larger structural environment. We are simply told that the answer to stagnation is an old-style Keynesian fiscal stimulus—a reversal of the supply-side economics that has dominated for more than a generation. (The political power dimensions of this in the contemporary situation are ignored.) On this basis Summers—seemingly responding to some unnamed critics on the left—reassures his readers that “secular stagnation does not reveal a profound or inherent flaw in capitalism. Raising demand is actually not that difficult” (9).

In fact, the current mainstream debate on secular stagnation is so superficial and circumspect that one cannot help but wonder whether the main protagonists—figures like Summers, Gordon, Paul Krugman, and Tyler Cowen—are not deliberately tiptoeing around the matter, worried that if they get too close or make too much noise they might awaken some sleeping giant (the working class?) as in the days of the Great Depression and the New Deal. The chief participants in the establishment discussion in this area seem determined to approach the issue in as shallow and ahistorical a fashion as possible. (For an extended criticism of these theories, see Hans G. Despain, “Secular Stagnation: Mainstream vs. Marxian Views,” Monthly Review, September 2015.)

Summers and the other mainstream contributors to this debate claim to be playing an innovative role in addressing the secular stagnation question, discussion of which, they suggest, has been practically nonexistent since the 1940s. Yet the truth, as they are no doubt well aware, is that stagnation has long been treated as a major issue on the left. There are approximately 500 articles addressing stagnation in the archives of Monthly Review alone. Many of these were written by leading radical economists of the twentieth century—including Joan Robinson, Michał Kalecki, Josef Steindl, Paul A. Baran, Paul M. Sweezy, and Harry Magdoff. Books on the stagnation tendency published by Monthly Review Press include such classic works as Sweezy’s The Theory of Capitalist Development, Kalecki’s Theory of Economic Dynamics, Steindl’s Maturity and Stagnation in American Capitalism, Baran’s The Political Economy of Growth, Baran and Sweezy’s Monopoly Capital, and Magdoff and Sweezy’s Stagnation and the Financial Explosion—along with, more recently, John Bellamy Foster and Robert W. McChesney’s The Endless Crisis.

This refusal to acknowledge left analyses has not gone entirely unnoticed in economic circles. In October 2015 Eckhard Hein, professor of economics at the Berlin School of Economics and Law, wrote a paper on “Secular Stagnation or Stagnation Policy?: Steindl After Summers,” for the Levy Economics Institute Working Paper Collection (Working Paper No. 846). Hein notes that the current stagnation discussion within the mainstream ignores such crucial thinkers as Rosa Luxemburg, Kalecki, Steindl, Baran, and Sweezy. For Hein this is serious shortcoming “because the theoretical foundations of modern [mainstream] secular stagnation debates are vague and can be challenged on several grounds” (2). Mainstream interpretations of stagnation, he says, generally lack historical analysis and theoretical complexity. They pinpoint the near-zero interest rate, as if this were the fundamental element in explaining stagnation—largely ignoring issues of monopoly, class, and power.

Hein himself focuses on Steindl’s Maturity and Stagnation in American Capitalism, with its emphasis on monopolistic pricing, the endogenous dampening of investment by giant firms, excess capacity, and increasing unemployment and excess capacity. With a shift to finance under monetarism, Steindl argued, stagnation was reinforced as policy (24). The superiority of Steindl’s analysis and that of figures such as Baran and Sweezy is that they pointed—in advance—to “the rise of finance-dominated capitalism,” while also emphasizing the changing “power relations between social classes” (2).

Most analysts of economic stagnation, whether of the left or right, recognize that it manifests itself in increasing unemployment or underemployment, growth of precarious work, and what is referred to as “shadow unemployment,” i.e., workers dropping in large numbers out of the labor force. Such phenomena are not confined to poor countries but are increasingly evident in the United States and in much of the advanced capitalist world. (See the Review of the Month in this issue by R. Jamil Jonna and John Bellamy Foster, “Marx’s Theory of Working-Class Precariousness: Its Relevance Today.”)

Many cities in the United States currently exhibit the growth of what could be called an environmental proletariat, that is, a situation in which working people are faced simultaneously—as in the capitalism of the Victorian Age—with the effects of stagnation and deteriorating environmental conditions. In Detroit in late January 2016, teachers, confronted with overcrowded classrooms and with schools plagued by rodents, rotting floors, and leaking roofs, walked out in massive sickouts, closing most of the schools in the city. Most children in Detroit are poor. The city contains tens of thousands of homeless people. As many as 30,000 houses lack running water. Unemployment and underemployment are almost universal. In this context, teachers have become the conscience of the city, fighting back through sickouts (since strikes are prohibited). Darnell Earley, the emergency manager appointed by Michigan Governor Rick Snyder to run the Detroit Public Schools was previously appointed by Snyder as the emergency manager in Flint, Michigan, where he played a key role in overseeing Flint’s switching its water source, resulting in the poisoning of an entire city with lead contaminated water.

In many places in the United States, the destruction and polarization are such that people are fighting at one and the same time for basic environmental rights—clean air, clean water, livable homes, safe working spaces, and genuine communities—and for meaningful work and livable wages. In “What’s the Matter with Detroit Schools,” published on February 20 on Education Week‘s Teacher blog, Nancy Flanagan explains the connection between deteriorating environmental conditions and the need for socially productive, life-supporting work, as opposed to degrading jobs—drawing here on the analysis of Monthly Review Press author and Detroit activist James Boggs (author of The American Revolution: Pages from a Negro Worker’s Notebook). Flanagan emphasizes the pressing social needs of Detroit teachers and the Detroit community, confronted with a succession of emergency managers brought in to replace their elected local officials and impose austerity conditions. The institutionally racist application of the Michigan emergency manager law is emphasized by none other than Fortune magazine, which notes that “In 2013, about half of Michigan’s African-American population lived in a city under emergency management, compared to 2% of white residents” (February 18, 2016).

What is clear is that we are living in a new age of race-class-environmental struggle in which public schools in the United States, consisting in the main of impoverished and near-impoverished students, are increasingly the focal point of the crisis, and are becoming major centers of community resistance. (On the question of public schools, see MR‘s March 2016 special issue on the Opt Out movement against standardized testing.)

All of this points to what Naomi Klein has famously called “disaster capitalism.” But it is not merely a result of repressive policies. Rather it is a product of an epochal crisis characterized by both economic stagnation and deepening environmental destruction. This, and not Summers’s easy fiscal-policy fix, constitutes the fundamental reality of the “Age of Secular Stagnation.” It is the irreversible crisis of capitalism in our time that is reordering the material foundations of human existence. This requires nothing less than a great revolt from below.