Dear Reader, we make this and other articles available for free online to serve those unable to afford or access the print edition of Monthly Review. If you read the magazine online and can afford a print subscription, we hope you will consider purchasing one. Please visit the MR store for subscription options. Thank you very much. —Eds.
Notes from the Editors
by The Editors
(Dec 01, 2016)
Topics: Economic Theory Movements Political Economy Places: Americas Europe Sweden Syria United States 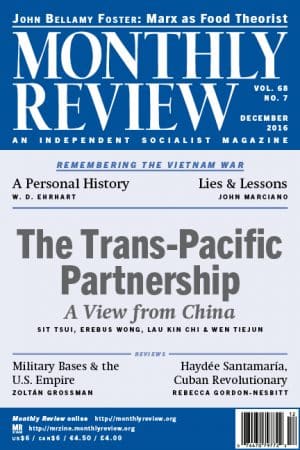 In October 2016, the Sveriges Riksbank (Swedish Central Bank) Prize in Economic Sciences in Memory of Alfred Nobel—commonly but incorrectly called the Nobel Prize in Economics—was awarded to two European-born, U.S.-based economists, Oliver Hart and Bengt Holmström, for their work on contracts related to executive pay. Hart and Holmström were lauded for having theorized what was thought to be the optimal mix of risk and incentives in pay packages for corporate executives, thereby determining the appropriate combination of basic salary, bonuses, and share options. In other words, they received the Riksbank Nobel Memorial Prize for their efforts to rationalize the exorbitant paychecks of CEOs and other corporate leaders—a direct service to big business. In most cases, however, the prize has not been given for such practical services to business, but has been granted rather to those extending neoclassical economic ideology.

In 1901, Alfred Nobel established five prizes: in physics, chemistry, literature, peace, and physiology or medicine. It was not until sixty years later, in 1969, that the Swedish Central Bank separately sponsored the economics prize, with the reluctant acquiescence of the Nobel family, which nevertheless insisted it be given a different name, to emphasize both the different source of funding and the fact that it was a memorial award ostensibly in Nobel’s honor (though in reality simply grabbing onto the prestige associated with the Nobel Prizes), and not one of the original prizes.

The reasons for the funding of the economic prize were purely political. In 1968, neoclassical or “marginalist” economics was threatened as never before. The Swedish Social Democratic Party was at its height. Meanwhile, rebellions were breaking out everywhere against orthodox economics. The Union of Radical Political Economics (URPE) was formed in the United States that year. The Riksbank, advised by a young Swedish Social Democrat turned conservative economist, Assar Lindbeck, opted to establish the prize as a device to enhance the prestige of neoclassical economics—giving it a monopoly over “economic science”—in its war against Swedish Social Democrats and radical economists. The original selection committee for the Riksbank Prize included two leading members of the Mont Pelerin Society (associated with arch-conservative economists Friedrich Hayek and Milton Friedman), but its driving force then and for the next quarter century was Lindbeck. In 1971, he published his most popular book, The Political Economy of the New Left (with a foreword by Paul Samuelson, who had received the prize the year before). Lindbeck’s book was directed against URPE, and focused its attacks on Paul Baran and Paul Sweezy’s Monopoly Capital and the radical economics of Monthly Review.

The ersatz-economics Nobel committee, dominated by Lindbeck, went on to ensure that the new prize would go primarily to scholars who represented economics for the 1 percent. In the first few years, there were a few “bastard-Keynesians”—to use Joan Robinson’s famous designation—like Samuelson, who received the prize. After that, however, it typically went to representatives of the right-wing, “free market” Chicago School. In 1974, Hayek, although his reputation in academic economics was then at its nadir, was given the prize alongside Swedish economist Gunnar Myrdal, the only social democrat (socialists were completely excluded) to ever be granted the Riksbank Prize. The coupling of Hayek and Myrdal was done deliberately—a kind of swap. Since then, no one on the left has received the prize. Indeed, by the time Milton Friedman won in 1976, it was widely noted that the selection committee no longer even felt obliged to reach another such compromise, for example by also giving a prize to John Kenneth Galbraith, Friedman’s obvious (and at the time, far more famous) counterpart to the left. In Capitalism and Freedom, Friedman had countered Karl Marx’s famous socialist slogan, “from each according to ability, to each according to need” (from The Critique of the Gotha Programme), with his own capitalist version: “to each according to what he and the instruments he owns produces.” Three Riksbank Prize laureates, James M. Buchanan, Friedman, and Hayek, all served as economic advisers to Augusto Pinochet’s military government in Chile following the bloody coup that overthrew the Popular Unity government of socialist President Salvador Allende.

Perhaps the most notorious case of an economist who was denied the Riksbank Memorial Nobel was MR contributor Joan Robinson. A major figure in Keynes’s inner circle at Cambridge in the 1930s, when the latter was writing the General Theory, and a leading proponent of Keynesian (and Kaleckian) economics, Robinson was also one of the principal developers of imperfect competition theory, and was the leading voice on the UK side of the famous Cambridge capital controversy, during which she built on Piero Sraffa’s neo-Ricardian theory. In the mid-1970s and into the 1980s, Robinson was one of the most distinguished living economists, and not only on the left. Even Business Week in 1975, after surveying the views of U.S. economists, predicted she would receive the prize. But Robinson, the author of An Essay on Marxian Economics, was too far to the left to be given the award. (Other MR authors, including Sweezy, were nominated over the years, but were considered well beyond the prize’s ideological boundaries.)

Economic historians Avner Offer and Gabriel Söderberg, in their valuable new book The Nobel Factor: The Prize in Economics, Social Democracy, and the Market Turn (Princeton University Press, 2016), from which much of the above analysis is taken (see also Yasha Levine, “There Is No Nobel Prize in Economics,” Alternet, October 12, 2012), argue that the Riksbank Prize was embraced by the mainstream media and academia as a genuine Nobel Prize, carrying the same prestige as all the others. It paid off: the Riksbank and the conservative economists associated with it achieved their objectives to an extent that must have exceeded their wildest dreams. The prize has been enormously successful in narrowing the conception of what constitutes economics—a field that was previously much wider. The ideology of an economics serving the 1 percent has become entrenched in academic, policy, and media discourse, with all other approaches downgraded as eccentric and “non-scientific.” Winners of the Riksbank Prize form a kind of “Nobelity” in economics that has elevated some approaches while practically extinguishing others. Economics in its hegemonic version has turned quite blatantly and unashamedly into the “bad conscience and evil intent of apologetic,” as Marx wrote of marginalist or “vulgar economics.” An ideological coup indeed!

On October 31, 2016, the New York Times carried an op-ed by Eric S. Goodoy and Aaron Jaffe, who teach, respectively, at the Pratt Institute and the Juilliard School, under the headline “We Don’t Need a ‘War’ on Climate Change, We Need a Revolution.” In the article, they write: “Marx thought of the human body as part of the natural world and called nature an extension of our bodies. Following Marx, contemporary theorists like Jason Moore and John Bellamy Foster describe our changing and dangerously unstable metabolic relationship with nature. Humans are a unique species in that we form complex relationships to regulate this metabolism as we produce our food, water, shelter, and more robust needs.” Employing this materialist outlook, Goodoy and Jaffe go on to argue for the need “to follow [Naomi] Klein’s lead in shifting the conceptual focus from technologies of power to relations of power.” We heartily recommend this article to all MR readers.

The valiant struggle taking place today, led by Native Americans, at the Standing Rock Reservation in North Dakota, in opposition to Dakota Access Pipeline, is the latest frontline in ecological struggle in the United States. For those unable to travel to North Dakota and engage directly in the nonviolent resistance, it is possible nonetheless to show your support by contributing funds for the legal defense of the protestors in the face of mass arrests and police violence. The Civil Liberties Defense Center (CLDC) in Eugene, Oregon, organized by Lauren Regan, a leading civil rights lawyer and MR author (see her article “Electronic Communications Surveillance” in the July-August 2014 issue), is organizing much of the legal support in alliance with the Red Owl Legal Collective. Those wishing to send donations specifically to help fund the work in North Dakota may visit https://cldc.org.

As this issue goes to press, the news has arrived that Donald Trump has won the electoral race for president in the United States. Trump ran a campaign that in the language of political science was classically fascist, in that it coupled racism with overtures to the white working class and claims that inner betrayals had caused the United States to fail in its wars in Libya, Syria, Iraq, and elsewhere. At the same time, Trump himself stood for big business, and was able to present himself as a strong man (the reason for his frequent self-comparisons to Putin). He proposed building a wall against immigrants. This was a strategy unlike previous Republican presidential campaigns. Hillary Clinton, though ostensibly the more progressive candidate (largely by default), ran a staid campaign for the neoliberal establishment, making no real appeals to the working population, and threatening ever wider wars, including a confrontation with Russia. Her own obvious political corruption emerged as a major issue in the election.

Events did not have to play out this way. We have no need to theorize an alternative. It existed in Bernie Sanders. He would have won. His “democratic socialist” campaign represented a bold attempt to address the real problems, particularly of class, race, and gender inequality, affecting the U.S. population. He broke all the rules and drew the support of millions of people who previously had little to do with politics. Polls at the time Sanders was running (even before the depths of Clinton’s personal corruption were revealed and Trump’s racism had reached its full height) suggested that he would have had a much stronger chance of defeating Trump. The institutionalized corruption of the Democratic Party establishment, including its anti-democratic superdelegate system which stacked the deck, was the very parchment on which this great tragedy was written.

Now there is no alternative but to resist.