Dear Reader, we make this and other articles available for free online to serve those unable to afford or access the print edition of Monthly Review. If you read the magazine online and can afford a print subscription, we hope you will consider purchasing one. Please visit the MR store for subscription options. Thank you very much. —Eds.
Documents
by Paul M. Sweezy
(Feb 01, 2017)
Topics: Ecology Marxist Ecology Movements Revolutions Places: Americas United States 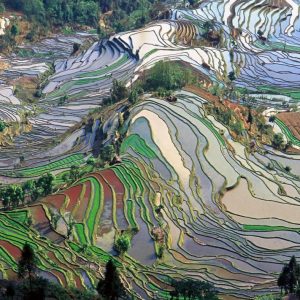 In the early 1970s, MR editors Harry Magdoff and Paul Sweezy increasingly introduced ecological themes into the magazine, and began to question the viability of unlimited, exponential economic growth in a limited biosphere. Sweezy, in particular, was deeply interested in ecological problems, a topic he began to write on in this period, in essays such as “Cars and Cities” (MR, April 1973), and to which he returned on various occasions until the end of his life. Beyond the Marxian tradition itself, the three figures who most influenced his thinking in this respect were the socialist biologist Barry Commoner, with whom Sweezy seems to have had no direct connection; Gerard Piel, long-time editor of Scientific American and a close friend; and a friend from Sweezy’s time at Harvard in the 1930s, Nicholas Georgescu-Roegen, who, in works such as The Entropy Law and the Economic Process (Harvard University Press, 1971) and Energy and Economic Myths (Pergamon, 1976), founded the modern field of ecological economics. In 1974, Georgescu-Roegen sent Sweezy two or more reprints from his work, including his 1972 essay “Energy and Economic Myths,” from which the title to the later Pergamon volume would be taken, and his 1974 article “Structural Inflation-Lock and Balanced Growth,” which would also be included in the 1976 collection.

Sweezy, as this letter indicates, was enthusiastic about “Energy and Economic Myths,” recognizing the crucial importance of Georgescu-Roegen’s critique of both mainstream-neoclassical and Soviet-style Marxian economics for their failure to incorporate the entropy law and ecological factors into their analyses. He was especially supportive of the famous eight conclusions at the end of the essay, in which Georgescu-Roegen challenges, albeit somewhat abstractly, many of the bases of capitalism, militarism, and imperialism on ecological grounds. Sweezy had not yet read Georgescu-Roegen’s opus on the entropy law. Yet he apparently proceeded to do so soon after writing this letter, as his copy of The Entropy Law, which contains several underlined passages, was kept on the bookshelf nearest to his desk, and Sweezy often said in private conversation that “Georgescu was right.” On one occasion, I recall his handing out photocopies of the essay “Energy and Economic Myths” to every member of the MR editorial committee at a meeting in New York. He was deeply concerned with the development of a mode of Marxian thought that could incorporate the entropy law—a task that would not be fully accomplished until the publication of Paul Burkett’s path-breaking Marxism and Ecological Economics (Haymarket, 2009).

In his letter, Sweezy was principally interested in the revolutionary implications of ecology and the break that these necessitated with pure “economism”—a rupture that only a truly revolutionary socialism could bring about. His main criticism of “Energy and Economic Myths” was that it “abstracted both economics and ecology from their societal context.” For Sweezy, economism and the dismissal of ecological limits spelled disaster under both capitalism and “actually existing socialism” on the Soviet model. However, his article with Harry Magdoff, “Twenty-Five Eventful Years,” from the June 1974 issue of MR, which he included with his letter, pointed to a worldwide “renaissance of Marxism” then occurring. This revival, he suggested, could be seen both in the economic critique of monopoly capitalism, and in the new developments in Marxian theory and practice (including ecological insights) arising from third world revolutions, particularly in China. Samir Amin’s “In Praise of Socialism,” published the following September, which Sweezy recommended to Georgescu-Roegen, was a direct manifestation of this renaissance.

Today, we can even less afford to abstract ecology from its social conditions. More than four decades after Sweezy wrote these words, the need for an ecological and social transformation of capitalism is all the more urgently apparent.

I have to hold you responsible for ruining my day’s work plan! The offprints you kindly sent me arrived in the morning mail and I couldn’t help getting immersed in “Energy and Economic Myths” (I’ll get to the Structural Inflation-lock later). I bought the Entropy [The Entropy Law and the Economic Process] book two summers ago at the Harvard Coop, expecting to read it in the then near future. But I kept postponing under pressure of other temptations and commitments, and gradually my good intentions faded away. I was therefore very glad to see the Yale lecture, hoping that it would give me in shorter compass the gist of your thinking on these problems. I hope it does, but whether or not I can at least say that I found it both fascinating and rewarding.

With your basic arguments I am in complete agreement, and I find them most felicitously expressed. Where I differ of course is that you have abstracted both economics and ecology from their societal context—and also, for the most part though not entirely, from their historical background. The last two and a half pages of the paper are admirable, but what do they imply but a profound social revolution? Not, incidentally (or not so incidentally), a revolution that merely overthrows an old order (as in the case of Russia and Eastern Europe) but one which sees this overthrow as only an opportunity to create a new order—one with very much the values and perspectives [with respect to ecology] which you spell out. And that seems to be precisely what the Chinese are trying to do (I do not of course say “have done”) and in so trying are sparking a renaissance of Marxism, especially in the Third World, which leaves the “economistic” Marxism of the period of the Second and Third Internationals far behind. I take the liberty of enclosing a copy of the June issue of Monthly Review, calling to your attention the editorial essay “Twenty-Five Eventful Years.” I also recommend a paper which will appear in the September issue, “In Praise of Socialism” by Samir Amin (an Egyptian Marxist who is director of the UN-sponsored African Institute of Economic Development and Planning in Dakar), with which I believe you will find yourself in widespread agreement. The Marxism of the kind of Marxian economists you cite in your notes is (I believe) as moribund and useless (if not worse) as neoclassical economics.

I too have fond memories of those long-gone days in Cambridge, and “Energy and Economic Myths” makes me regret that I have not followed your work more carefully in the intervening years. I hope our paths will cross one of these days.

A People’s Theater on Skid Row
The Brazilian Crisis