Dear Reader, we make this and other articles available for free online to serve those unable to afford or access the print edition of Monthly Review. If you read the magazine online and can afford a print subscription, we hope you will consider purchasing one. Please visit the MR store for subscription options. Thank you very much. —Eds.
Notes from the Editors
by The Editors
(Feb 01, 2017)
Topics: Ecology Political Economy Places: Americas Europe Russia United States 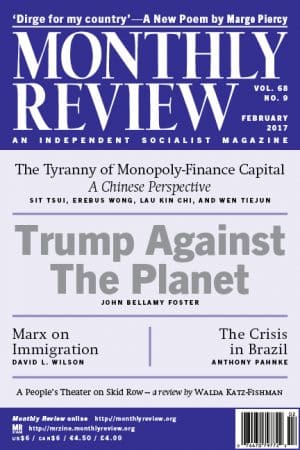 For those attuned to the most fashionable trends in mainstream discourse on climate change, it is clear that “resilience” is now in, and “sustainability” is out. Once it became apparent, as Naomi Klein has said, that “capitalism is winning” in its war on the climate (see this issue’s Review of the Month on “Trump and Climate Catastrophe”), and that, consequently, more catastrophic environmental conditions on a planetary level were in the offing, the dominant ideology subtly shifted from sustainability to resilience. This change was first signaled by the 2004 United Nations report Living with Risk, and has since become ubiquitous in establishment environmental discussions.

Nevertheless, there are reasons to question this conceptual shift. “Although,” as Stan Cox and Paul Cox point out in their 2016 book How the World Breaks, “the word ‘resilience’ is at times used interchangeably with ‘sustainability,”’ in reality “it’s very different. A sustainable household makes a city more sustainable, which makes a nation more sustainable. Resilience isn’t like that. A society can be highly resilient for a century but destroy its resource base in the process, ruining the next century. A community can bounce back from catastrophe by virtue of outside support…. Conversely, a vulnerable community’s destruction can create a buffer zone” for the vested interests (14). Ecological catastrophes in capitalist societies, such as Hurricane Katrina in 2005, strike the rich as well as the poor, but the workings of the system ensure in numerous ways that the poor lose while the rich gain, the latter buffered by the losses of the former. (See John C. Mutter, The Disaster Profiteers: How Natural Disasters Make the Rich Richer and the Poor Even Poorer [St. Martin’s, 2015].)

The concept of resilience, while adopted by some progressive thinkers and organizations, such as the Stockholm Resilience Centre, is nonetheless being rapidly incorporated into a survival-of-the-most-resilient philosophy, in which poor nations, and indeed exploited and dispossessed people everywhere, are told they must simply become more “resilient” in order to survive—but in a world in which such dynamic adaptability is available mainly to the rich, who enjoy monopolies of capital, resources, and technology. It therefore comes as no surprise that none other than Donald Trump has declared on his hyperactive Twitter account that: “Resilience is part of the survival of the fittest formula” (January 14, 2014, http://twitter.com/realDonaldTrump). In this approach, responsibility for “natural” disasters, which strike with ever-greater frequency and intensity due to climate change, is decentralized. The poor are offered this message of resilience ostensibly as one of empowerment, yet its underlying ideology is that of a reemerging social Darwinism.

Within mainstream ecological discussions resilience is often presented in functionalist or systems-theory terms, referring to a dynamic, adaptable, and fragile whole, which must continually shed its more vulnerable and expendable parts. “It’s those in the economic power centers of the neoliberal world,” Cox and Cox critically observe, “who are best placed to master resilience. This is their claim on the future. And it must be contested: their resilience is catastrophic by design, morally unhinged, because it counts on the vulnerable to absorb what the market sheds so that the market’s irreparable fragility can be conserved” (324).

The left, therefore, must strongly resist the current, retrograde rhetoric of resilience. Although it is true that humanity as whole will have to become more resilient in the harsher natural world of the Anthropocene, this should not be used as a further justification for the classist, racist, patriarchal, and imperialist logic of capitalism. In fact, it is capitalism’s own operations that make ecosystems and the human ecology less resilient and less sustainable. From the traumas of unemployment and racism to the loss of biodiversity in farms and forests to ocean acidification, and on and on, ecological sustainability and environmental resilience are both decreasing—due to capitalism.

From a socialist standpoint, it is crucial to hold onto the concept of sustainable human development, based in substantive equality and rooted in collective struggle—demanding a new human metabolism with the earth, and carrying with it a sense of shared responsibility toward what Marx called “the chain of human generations.” This is the only viable way to incorporate a wider, more dynamic sustainability, embracing the resilience of all (including future generations and the world’s ecosystems) within a coevolving human-nature relation. This is the essence of ecological and social revolution in our time.

For those interested in learning more about the conditions of grain and bread production in the Industrial Revolution, as treated in “Marx as a Food Theorist” by John Bellamy Foster in the December 2016 issue of MR, Myrna Wood, a longtime Canadian subscriber originally from Iowa, has written to inform us of a BBC documentary series on “Victorian Bakers.” Episode 2, Wood points out, visually “describes exactly [how] bread making and adulteration” operated, as discussed in the article. “It shows the superexploitation of journeymen bakers through their work and living conditions,” Wood writes, providing a “concrete reproduction” of this little-known history. Videos from the series can be found at http://www.dailymotion.com/video/x4h8mty. She adds, much to our delight:

I am a faithful reader of MR ever since I found it during the American war in Vietnam. I especially appreciate your writings on Marx and environmentalism.

My understanding of Marx and Engels’s writings depend on their discussions of real life situations–for instance women workers, metabolic rift. I am old enough to remember the world of small family farms in Iowa and to have left it for the industrialized post-war city as a woman worker.

Since my retirement to a rural community I have become involved in trying to preserve a place of rare wildlife critical habitat being overtaken by tourism and wineries, which are at least more benign than the industrial turbine projects that threaten all the shorelines of the Great Lakes and are so important to migrant birds. Our small Field Naturalists club is now well known in certain circles for having stopped one of the proposed turbine projects in the center of our South Shore Important Bird Area. While renewable energy will be one solution to stopping the Alberta tar sands, the siting decisions are being made on Wall Street and by tar sands oil companies for profits–what else is new.

We are in the fight of our lives and the life of the planet. Monthly Review will be needed even more.

Jim Farmelant, an MRzine author, has also written to us, with this observation:

In the “Notes from the Editors” for the December 2016 issue, you correctly observe the general absence of left-leaning economists from being recipients of the Riksbank Memorial Prize (popularly known as the Nobel Prize in Economics). And as you note back in 1975, most economists expected Joan Robinson would win the Prize, but that never did happen. However, in 1975, one Soviet economist, Leonid Kantorovich, did win the Prize, sharing it with the American, Tjalling Koopmans, for their work in creating what is known as linear programming. Kantorovich was the only Soviet to ever win the Prize.

Farmelant is entirely right, and offers an important corrective to our earlier notes on this. Kantorovich is known as the founder of linear programming, and won the Lenin Prize in 1965, prior to receiving the 1975 Riksbank Prize. In the main source that we drew on for our comments—Avner Offer and Gabriel Söderberg’s The Nobel Factor—it was suggested that the decision to give the Riksbank Nobel Memorial Prize in 1975 to two linear programmers, including one from the Soviet Union, was likely an attempt to defuse the outcry expected from the decision not to award the prize to Joan Robinson that year, as had been widely anticipated. Kantorovich was often viewed in the West as a mathematician and a technician, interested in the optimal allocation of resources, whose work justified the use of a price system even in a socialist economy. His analysis was thus seen as relatively compatible with neoclassical economic views, in contrast to more orthodox Marxian outlooks. Nevertheless, that a Soviet economist won the prize in 1975, sandwiched between Friedrich Hayek (and Gunnar Myrdal) in 1974 and Milton Friedman in 1976, and followed by a string of University of Chicago recipients, was significant, in that it made slightly more plausible the Riksbank committee’s claims to “objectivity.”

Melvin Leiman—emeritus professor in the Department of Economics at Binghamton University and the author of the Political Economy of Racism, as well as numerous articles on political economy—turned ninety on December 30, 2016. An MR subscriber since the first issue and a founding member of the Seattle Monthly Review Discussion Group, Mel has been a lifelong activist and theoretician. We wish him our best as he embarks on his tenth decade.

Corrections: In the Notes from the Editors in the December 2016 issue, Eric S. Godoy’s surname was misspelled as Goodoy.

Rob Wallace’s article “Revolutionary Biology” in the November 2016 issue contained extensive quotations from the Christopher Caudwell essay “Heredity and Development.” We apologize to the copyright holder, David Margolies, for not requesting his permission prior to publication, and appreciate his ex post facto consent.