Dear Reader, we make this and other articles available for free online to serve those unable to afford or access the print edition of Monthly Review. If you read the magazine online and can afford a print subscription, we hope you will consider purchasing one. Please visit the MR store for subscription options. Thank you very much. —Eds.
Notes from the Editors
by The Editors
(Oct 01, 2017)
Topics: History Inequality Race Places: Americas United States 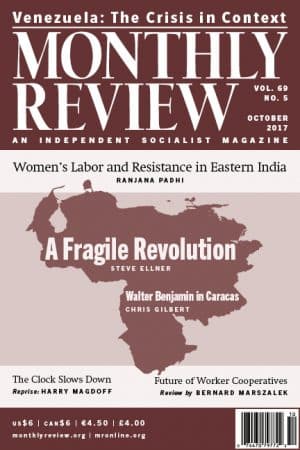 Since the events in Charlottesville in August, seven months into the Trump administration, it has become common in left and even liberal circles to point to the presence of neofascism in the White House, as evidenced by the president himself and some of his closest associates. The departure of Steve Bannon, freeing Trump’s former chief strategist once again to mastermind Breitbart News, has done nothing to alter these perceptions.

Nevertheless, it is worth noting that prior to the white supremacist rally and the accompanying violence in Virginia—whose participants Trump has defended as “very fine people”—few commentators or publications on the left were willing to speak frankly of the new administration’s neofascist tendencies. While some questions were raised in this respect during the presidential campaign, after the election, such criticisms were widely dismissed as alarmist and inappropriate, even on the left.

Monthly Review thus stood out in arguing both before and after the election that Trump’s campaign and administration have had a neofascist thrust. Before last November, we warned in the Notes from the Editors of both Hillary Clinton’s warmongering and Trump’s reactionary nationalism (as well as Trump’s own embrace of unrestrained military destruction). After the election, we immediately ran a series of articles by John Bellamy Foster, Henry Giroux, and Michael Joseph Roberto on the origins and growth of neofascism in the new administration and the country in general, and Monthly Review Press has just published Foster’s Trump in the White House: Tragedy and Farce, building on his articles from that series. (For more on the rise of neofascism in the United States, see not only the February, April, May, and June 2017 issues of MR and Foster’s new book, but also Samir Amin’s “The Return of Fascism in Contemporary Capitalism” in the September 2014 issue, as well as Robert W. McChesney and John Nichols, People Get Ready [Nation, 2016].)

Why was MR so quick to identify a sharp neofascist turn in both the U.S. body politic and the Trump White House, even as other publications shied away from this conclusion? The magazine’s critical assessment cannot be attributed to a greater radicalism on our part; rather, these conclusions derived from a tradition of historical-materialist analysis of fascism reaching back to the 1930s and ’40s. This Marxian critique of fascism and neofascism is complex and multifaceted, but a few summary points can be made. Marxist theorists have long understood fascism as an alternative mode of governing the capitalist system, one that arises in periods of crisis and seeks to overturn liberal democracy—the preferred form of capitalist management of the state during most of its history. Fascism generally emerges in times of economic downturn and political impasse, coupled with a pervasive weakness of the left. Invariably involving struggles over international hegemony—the place of a given nation in the hierarchy of states—it thus combines nationalism, jingoism, racism, militarism, and imperialism.

In class terms, fascism takes the form of an alliance between the lower-middle class or petty bourgeoisie and key sectors of monopoly capital (today, monopoly-finance capital). The mass base of fascism is thus deeply entrenched in the lower-middle class and some more privileged sectors of the working class, particularly among dominant racial groups and in more religious and rural sectors of the population. Ideologically, the radical right opposes the working class and unions, promotes a retrograde chauvinism with respect to race and gender, and holds deep contempt for the more marginalized populations of the poor and racially oppressed. At the same time, it finds itself deeply at odds with the upper-middle class, perceived as liberal in culture and politics, and with what today is called the “swamp” of corrupt elites in both the state and the economy—at times extending to “crony capitalists.”

It is this unstable alliance between the lower-middle class and big capital or the ultra-rich that makes fascism work. Whatever their rhetoric of countering elite corruption, far-right “populist” movements based in the petty bourgeoisie are not only not opposed to capitalism itself, but indeed ardently pro-capitalist, in favor of sweeping privatization and deregulation. They see their enemy as the masses of the “unwashed,” multi-racial working class below and the educated, upper-middle class and political elite above. The state in the classical fascist political conception is centralized within itself (the original meaning of “totalitarianism”), concentrating power in the executive and weakening the legislature and judiciary. Police power, prisons, and often paramilitary forces grow in force, as does blatant official propaganda, relying on the “big lie” principle and the outright denigration of science and rationality. An authoritarian personality, in the form of a head of state or military strongman, provides the symbolic center around which fascist movements gravitate. Fascism also involves attacks on the liberal-democratic media, educational institutions, unions, and civil society in general, in an effort to “bring them into line” (Gleichschaltung) with the new order.

The power of the fascist state depends on its ability gradually to absorb the most powerful class forces and fractions of capitalist society into its repressive project. Hence, the fascist state inevitably moves in the direction of an outright class dictatorship, its capitalist character only partly disguised by the extraordinary degree of centralization within the state apparatus itself. Fascist regimes are characterized by bitter struggles within their hegemonic class alliance, pitting the radical-right forces of the lower-middle class against the contradictory interests of the upper echelons of the capitalist class. Still, it is the dominant fractions of the capitalist class that wield real power in the fascist state. The consolidation of state power thus usually means the abandonment, except in words and empty gestures, of whatever promises were made to its mass base.

If these characteristics can be said to pertain to fascism in general, and admittedly we have drawn them with a broad brush, there are nonetheless many different forms, degrees, and national-cultural characteristics in which the fascist phenomenon may manifest. It is therefore useful to refer to a fascist genus, with numerous cultural variations. In Europe in recent decades, neofascist movements have emerged in several countries that clearly belong to this genus in their class structure and ideology, but which seek to distance themselves from earlier, explicit fascist groups to gain a degree of respectability—at least during the electoral struggle. Such ideological transformations are of course normal in political movements, but close study of their class structures and alignments, as well as their leadership and organization, shows them for what they are.

The conditions giving rise to neofascism in the United States and Europe today constitute a catalogue of the maladies afflicting contemporary capitalism, including continuing economic stagnation and financialization; the rise to dominance of monopoly-finance capital; the spread of imperialist globalization; weakening U.S. hegemony; the global war for geopolitical dominance and the terror it inflicts; increasing inequality of income and wealth at all levels of the system; rapidly deteriorating living standards among the lower-middle and working classes in the capitalist core; and the denial of impending climate-change catastrophe. All of these were intrinsic to the neoliberal project, which emerged from the early 1980s on as the prevailing political-economic ideology and strategy of monopoly-finance capital. But with the deepening crisis of the system, marked by the Great Financial Crisis of 2007–09 and the subsequent years of stagnation, significant fractions of the capitalist class, mostly connected in the United States to the finance and energy sectors, have sought to stabilize their rule by shifting from neoliberalism to neofascism. The nationalist-populist revolt in the United States was further abetted by the rightward shift of both Republicans and Democrats, including Obama’s neoliberal presidency. Moreover, the whole history of American white supremacy, from slavery to Jim Crow to the age of mass incarceration, meant that the rise of neofascism as the successor to neoliberalism was bound to take a virulently racist form.

What all of this tells us is that neofascism, like fascism generally, is a symptom of capitalism in a period of structural crisis and, today, of potentially catastrophic climate change. It can also be viewed secondarily as an outgrowth of neoliberalism, and of the destabilization of the already repressive neoliberal version of the liberal democratic state. As Cornel West has said, “the neoliberal era in the United States ended with a neofascist bang.”

There are nevertheless early but encouraging signs of radical resistance. The groups that took part in the counter-protest against white supremacists in Charlottesville represented a cross-section of the U.S. left, from socialists to communists to anarchists. In uniting to oppose neo-Nazism, these organizations and movements affirmed what MR has argued: to combat the new right-wing resurgence, it is necessary to combat capitalism itself. There is no other way.

In August, the New School for Social Research in New York announced the establishment of the Harry Magdoff and Paul Sweezy Fellowships, funded by a million-dollar gift from an anonymous donor. According to the school, these “will provide full funding for nine incoming doctoral students in the Department of Economics over three years and advance interdisciplinary research on the dynamics of capitalist economies at the Heilbroner Center,” named for the famous New School economist Robert Heilbroner, a student of Sweezy’s at Harvard and later a contributor to MR. In a press release, the New School indicated that the gift is intended to honor not just longtime MR coeditors Magdoff (1913–2006) and Sweezy (1910–2004), both of whom taught courses there, but also “the entire heterodox tradition of Marx, Keynes, Kalecki, Robinson, and Steindl.” (The latter three all wrote for the magazine and Monthly Review Press.)

Naturally, we are enormously pleased by this generous recognition of the life and work of Magdoff and Sweezy. For those wishing to become better acquainted with Sweezy’s writing, we highly recommend the new book The Age of Monopoly Capital: Selected Correspondence of Paul A. Baran and Paul M. Sweezy, just out from Monthly Review Press. In honor of Magdoff, we are reprinting in this issue his very important and still-relevant 1995 MR article “The Clock Slows Down.”

Correction: Page 53 of the July–August 2017 issue, in Bernard D’Mello’s article “The Great Struggle to Escape Capitalism,” includes the sentence: “The Communist Party played no part in organizing campesinos and, even in the immediate aftermath of Castro’s takeover, it did not side with his 26th of July movement.” This is not quite accurate. While it is true that the Cuban Communist Party played only a small role in the guerrilla war led by Fidel Castro’s mainly rural 26th of July movement, by mid-1958 it fully supported that struggle, both ideologically and materially. We thank subscriber Laurence Goodchild for alerting us to this error.