Dear Reader, we make this and other articles available for free online to serve those unable to afford or access the print edition of Monthly Review. If you read the magazine online and can afford a print subscription, we hope you will consider purchasing one. Please visit the MR store for subscription options. Thank you very much. —Eds.
Notes from the Editors
by The Editors
(Nov 01, 2017)
Topics: Ecology Marxist Ecology Political Economy Places: Americas United States 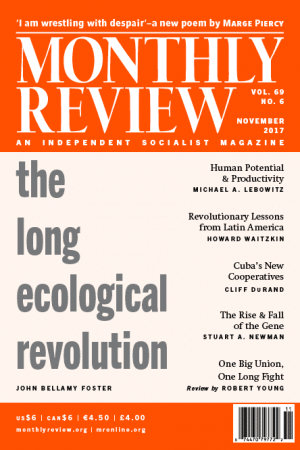 Over the last three decades, Monthly Review has stood out as a major source of ecosocialist analysis. This has been especially evident in recent months, with the publication by Monthly Review Press of three pathbreaking books: Kohei Saito, Karl Marx’s Ecosocialism: Capital, Nature, and the Unfinished Critique of Political Economy; Ian Angus, A Redder Shade of Green: Intersections of Science and Socialism; and Fred Magdoff and Chris Williams, Creating an Ecological Society: Toward a Revolutionary Transformation.

Saito’s Karl Marx’s Ecosocialism is an extraordinarily important work that both deepens and extends our analysis of how Marx sought to integrate ecological materialism and an understanding of ecological crisis into his critique of political economy. Saito gives new significance to what has been called Marx’s theory of metabolic rift, by showing how Marx used his concept of social metabolism (Stoffwechsel) to ground his value analysis in the ecological conditions of production, incorporating a conception of natural limits. At the same time, he brings critical new evidence to bear by exploring the ways that Marx continued to develop this ecological critique, and to deepen its significance for his critique of capital, as revealed in his little-known or still unpublished natural-scientific notebooks. Karl Marx’s Ecosocialism thus represents an enormous expansion of our understanding of Marx’s oeuvre, reinforcing and extending the interpretations offered in earlier works such as Paul Burkett’s Marx and Nature (1999) and John Bellamy Foster’s Marx’s Ecology (2000). The widespread failure for many years to recognize Marx’s contributions to ecology was mainly a product, Saito argues, of the biases of so-called Western Marxism, which deemphasized the materialist aspect of Marx’s thought. “If the ‘material’ becomes integrated” into interpretations of Marx’s system, Saito argues, his “texts open the way to ecology without much difficulty” (262).

Following upon his major work Facing the Anthropocene (Monthly Review Press, 2016), Angus’s A Redder Shade of Green consists of a set of elegant and necessary interventions in debates related to ecosocialism and science. It is divided into five parts: (I) “Natural Science and the Making of Scientific Socialism,” (II) “Responding to the Anthropocene,” (III) “Numbers Are Not Enough,” (IV) “Saving Species, Saving Oceans,” and (V) “Toward an Ecological Civilization.” Over the course of the book, Angus takes on critical issues such as Marx’s relation to science and Darwin; the denial of the Anthropocene concept by some on the left; the growth of ecomodernism; “The Return of the Population Bombers”; biodiversity; and “The Myth of ‘Environmental Catastrophism.'” The brilliance and succinctness of this analysis and its concrete engagement with crucial debates make A Redder Shade of Green at once a useful introduction to ecosocialist thought for the uninitiated and a valuable corrective for readers already well-versed in ecological Marxism.

Magdoff and Williams’s Creating an Ecological Society is perhaps the most comprehensive yet accessible analysis currently available of the changes needed to cope with the world’s growing ecological and social crises. Written by scholars equally versed in natural and social science, it is full of concrete considerations of the radical praxis demanded by the depredations of capitalist society. It is a book full of revolutionary hope, characterized not only by its rejection of business as usual, but also its illuminating description of the countless things we can do to transcend the status quo and to create an ecological civilization. Magdoff and Williams do not play down the rupture with existing social relations that this would require. As they write:

The word revolution is currently used by all manner of people in very different contexts…. It is therefore important to define what we mean by revolution, which to us means the total rearrangement of social power and its reconstitution on the basis of substantive equality. In other words, the only way to create an ecologically based society is by creating a classless society based on cooperation and the democratic decisions of the entire population. Only by overturning current social relations is it possible to create a society compatible with the well-being of the planet and its people.

What makes these three books so important is that they reinforce each other in theory and practice, moving from classical historical materialism toward present ecological and social struggles in an almost seamless way. Taken together, they offer both a powerful, historically grounded argument and a way forward for society and the earth. Now it is a question of putting that knowledge and vision into practice.

In the last few years, much of the unpublished work of Paul Baran and Paul Sweezy has become available. Along with the recent publication of The Age of Monopoly Capital: The Selected Correspondence of Paul A. Baran and Paul M. Sweezy, 1949-1964 (Monthly Review Press, 2017), we would like to announce the completion of the Paul A. Baran online archive at Stanford University, which has been in the works for several years. Interested readers may visit the archive at http://oac.cdlib.org, where they will find translations, letters, and photographs galore.

Doug Dowd, economist, public intellectual, and our cherished friend, died at his home in Bologna, Italy, on September 9, at the age of ninety-seven. Doug was involved in every major transition in MR‘s history, from the 1950s to the beginning of this century. We considered him a vital member of the MR family, one who made numerous contributions to the magazine and the press. He presided at times at Monthly Review Foundation gatherings, and constantly, through his own actions, spurred us to greater efforts, and to a more public role. Long a professor of economics at Cornell (and later at the University of California at Berkeley and at Santa Cruz, and at the University of Modena in Italy), he made pioneering contributions to radical economics in his analysis of the work of Thorstein Veblen, and played a key role in bringing Veblen’s powerful U.S. vernacular of social critique to bear on contemporary social and economic problems. He was a mentor to Daniel Ellsberg of Pentagon Papers fame, and was himself a major voice in the anti-Vietnam War resistance. Many aspects of Dowd’s memorable life are recounted in his Blues for America (Monthly Review Press, 1997). MR editor John Bellamy Foster recalls that at a meeting of the Union for Radical Political Economics in Eugene, Oregon, in 1975, Dowd declared that “Capitalism is like a bad compass, it takes you systematically in the wrong direction.” He will be missed.

The Long Ecological Revolution
Movement as a Political Act