Dear Reader, we make this and other articles available for free online to serve those unable to afford or access the print edition of Monthly Review. If you read the magazine online and can afford a print subscription, we hope you will consider purchasing one. Please visit the MR store for subscription options. Thank you very much. —Eds.
by Michael A. Lebowitz
(Nov 01, 2017)
Topics: Marxism Movements Revolutions Places: Americas Venezuela 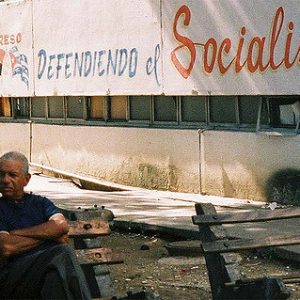 Michael A. Lebowitz is a professor emeritus of economics at Simon Fraser University.

This article is adapted from a presentation at the University of Havana in November 2016, organized by the Federation of University Students as part of the Memoria Popular Latinoamericana institute’s project on Socialism for the Twenty-First Century.

When I went to work in Venezuela in 2004, I discovered in the Bolivarian Constitution some elements that I consider to be central to the concept of socialism for the twenty-first century. For one, there was the emphasis upon human development—the goal of “ensuring overall human development.” But there was more. That Constitution also focused upon the question of how people develop their capacities and capabilities—i.e., how human development occurs. It declared that participation by people in “forming, carrying out and controlling the management of public affairs is the necessary way of achieving the involvement to ensure their complete development, both individual and collective.” The necessary way. Accordingly, the Bolivarian Constitution calls for democratic planning and participatory budgeting at all levels of society and upon “self-management, co-management, cooperatives in all forms.”1

And these were more than noble words in a constitution that are soon forgotten. President Chávez constantly stressed the importance of practice. “Socialists have to be made,” he explained on Aló Presidente in 2007. “A revolution has to produce not only food, goods and services it also has to produce, more importantly than all of those things, new human beings: new men, new women.” Agreeing with Che’s point about the necessity of simultaneously developing productive forces and socialist human beings, Chávez insisted that the only road was practice: “We have to practice socialism, that’s one way of saying it, have to go about building it in practice. And this practice will create us, ourselves, it will change us; if not we won’t make it.”2

Precisely because he understood the importance of this link between practice and human development, Chávez stressed the development of the communal councils where people transformed both circumstances and themselves, calling those councils the cells of a new socialist state. And, it is why, in his last reflection (when already seriously ill), Chávez stressed the absolute necessity of building the communes (comuna o nada) and argued that capitalist workplaces with their built-in hierarchical social division of labor should be replaced by one that involves the full participation of the associated producers and an appropriate means of coordination. For Chávez, the necessary road was protagonistic democracy—in the workplace and in the community—as the practice that transforms people.

All this should be familiar to anyone who has studied Marx. This key link between human development and practice is precisely Marx’s concept of revolutionary praxis as “the simultaneous changing of circumstances and human activity or self change.” Once we grasp Marx’s key link, we understand that every human activity has two products—both the change in circumstances and the change in self, both the change in the object of labor and the change in the laborer. In short, in addition to the material product of activity, there always is a second product—the human product. Unfortunately, that second product is often forgotten. And, the question we should ask is: what are the implications of forgetting that second product?

If we begin from the recognition that every activity in which people engage forms them, then we understand that there is a relation between the nature of our acts and the capacity we develop. If, for example, workers democratically decide upon a plan, work together to achieve its realization, solve problems which emerge and shift from activity to activity, there is a constant succession of acts which expand their capacities. Those workers are, indeed, the products of their own activity. “Every developed personality,” proposed the French Marxist psychologist Lucien Sève, “appears to us straight away as an enormous accumulation of the most varied acts through time.”3

Thus, the level of capacity is a function of the nature and extent of practice. This is one aspect of Marx’s key link of human development and practice. But there is another side. What do we mean by capacity? Simply, capacity is the ability to engage in many acts. Sève defines capacities as “the ensemble of actual potentialities, innate or acquired, to carry out any act whatever and whatever its level.”4 The higher the extent of capacity, then, the greater the potential flow of acts drawing upon that capacity. In short, capacity is a stock, a stock which is expanded as a result of particular acts, and which is the basis for a flow of acts. Thus, we need to explore the complex dialectical relationship between acts and capacities (which, is to say, between practice and human development).

For example, a high capacity, i.e., a great potential for action, does not mean that all of that capacity is necessarily utilized. There is the potential of unutilized capacity. And if particular capacities are unutilized, they tend to atrophy—even if they have been built up in the past. For example, education leading to the development of particular skills will lose effectiveness over time and, indeed, will be forgotten if unutilized. Similarly, a process of learning by doing builds capacity, but if those capacities subsequently are not used, they wither away. In this respect, just as Marx spoke metaphorically of the renewal of the worker in his free time as “the production of fixed capital, this fixed capital being man himself,” one might speak of a tendency for moral depreciation of human capacity that has been built up, all other things equal, if it is not used.5

By this logic, the maintenance of a stock of particular capacities requires renewal by its use. The education received before its utilization, the skills that are the result of a process of learning by doing—these previous additions to capacity are renewed through their use. This is a case of simple reproduction of capacity. Contracted reproduction of capacity, in contrast, occurs through non-utilization of that capacity. Thus, practice is key in determining the level of capacity.

In the same way, we can think about expanded reproduction of capacity. That growth of capacity occurs as a result of new acts. For example, engaging in new types of activity, solving new problems, activities that break with routine—these are practices that expand the stock of capacity. This allows us, then, to distinguish analytically between the set of activities that expand capacities (Type I) and the set of activities that simply utilize existing capacities (Type II). The second permits the simple reproduction of those capacities and thus, in itself, does not imply further growth. Type I activities, in contrast, may be seen as an investment that expands capacity and, all other things equal, permits an increase in future activities. Finally, it is obvious that the non-utilization of existing capacity and, even more, the destruction of existing capacities means, all other things equal, a reduction in the potential to carry out activities in the future.6

In contrast, the logic of the working class is centered around what Marx called in Capital “the worker’s own need for development.” Thus, the focus of socialist accounting and the concept of socialist efficiency is upon all conditions that allow for the full development of the worker’s capacity. There are here two different concepts of rationality, and they are not neutral, but rather class concepts, and they yield different conclusions. For example, time spent building workers’ capacities (through learning skills on the job like accounting or engaging in collective discussions to solve production problems) appears for capital (and thus capitalist accounting) as inefficiency and reduced productivity. In contrast, from the perspective of the worker and a society oriented to “the worker’s own need for development,” these are investments.

Is it possible to find a way to measure and thereby compare these contrasting products of capitalist production? Our first concern here must be the necessity to recognize that of the two joint products of capitalist production, only one is acknowledged in traditional capitalist accounting, and we need to understand the implications of this silence. We need to understand that capitalist accounting is a class concept; its class bias is revealed by what it considers important to measure and by what it excludes.

In contrast, the logic of the working class (and thus the socialist accounting implicit in it) is not so one-sided. Workers have an interest in productivity increases insofar as they contribute to the satisfaction of their own need for development. The time released from the direct production process, Marx noted, is “time for the full development of the individual, which in turn reacts back upon the productive power of labor as itself the greatest productive power.”7 That growth in productivity in its turn creates the basis for more free time.

Thus, socialist accounting necessarily considers the change in both products—the change in circumstances and the change in human capacities, the joint products of productive activity. So, I return to the question I posed earlier: what happens if we forget about the second product? What happens if we ignore the principle for socialism for the twenty-first century that protagonism is the necessary condition for complete development, both individual and collective?

As I have argued elsewhere, to build the new socialist society, it is necessary to develop new, socialist concepts.8 So, let me end by paraphrasing Che from his Man and Socialism in Cuba: the pipe dream that socialism can be achieved through capitalist accounting and capitalist concepts of efficiency can lead into a blind alley. And you wind up there after having travelled a long distance with many crossroads, and it is hard to figure out just where you took the wrong turn.

About Michael A. Lebowitz

View all posts by Michael A. Lebowitz →

Cuba’s New Cooperatives
I am wrestling with despair