Dear Reader, we make this and other articles available for free online to serve those unable to afford or access the print edition of Monthly Review. If you read the magazine online and can afford a print subscription, we hope you will consider purchasing one. Please visit the MR store for subscription options. Thank you very much. —Eds.
Notes from the Editors
by The Editors
(Apr 01, 2018)
Topics: History Inequality Race Places: Americas 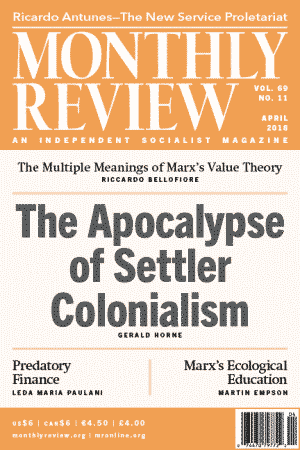 In the Review of the Month in this issue, Gerald Horne writes that “what is euphemistically referred to as ‘modernity’ is marked with the indelible stain of what might be termed the Three Horsemen of the Apocalypse: Slavery, White Supremacy, and Capitalism.” Horne’s powerful essay, adapted from the introduction to his new book The Apocalypse of Settler Colonialism, exemplifies the recent resurgence of black Marxist thought and theories of “racial capitalism.” These form part of a triad of revolutionary new developments in Marxist theory, building on Marx’s own open-ended critical analysis, that address (1) social reproduction of the household, (2) the expropriation of nature, and (3) racial capitalism. The first two were discussed in Reviews of the Month in the January and March issues of MR, and Horne’s article gives readers an extraordinarily rich view of the third.

The greatest sociologist in U.S. history was undoubtedly W. E. B. Du Bois, who moved through several stages in his radical intellectual career, ending up as a powerful historical-materialist thinker. In works such as Black Reconstruction in America, Du Bois joined Marxism with the revolutionary struggle for black liberation, and one of his most important essays from this period was “Negroes and the Crisis of Capitalism in the United States,” published in the April 1954 issue of MR. But if Du Bois remains an essential starting point for discussions of black Marxism in the United States, current discussions also draw deeply on the work of Cedric J. Robinson, particularly his Black Marxism: The Making of the Black Radical Tradition, first published in 1983. In his nuanced analysis, Robinson focused on three major figures in that tradition: Du Bois, C. L. R. James, and Richard Wright. Today, interest in Robinson’s long-neglected work has been revived by such thinkers as Robin D. G. Kelley, Bill Fletcher Jr. (a longtime friend of MR), and Angela Davis. (See especially Kelley’s episode on Robinson for the podcast This Is Hell!, Fletcher’s recent YouTube video on “Black Marxism,” and Davis’s “Interview on the Futures of Black Radicalism,” Verso blog, October 11, 2017—all reposted on MR Online.) This in turn has brought renewed attention not only to the writers mentioned above, but also to other theorists of racial capitalism, such as noted MR and Monthly Review Press authors Grace Lee Boggs, James Boggs, Oliver Cox, and Roxanne Dunbar-Ortiz. Horne’s own pioneering work—in such books as Race to Revolution and Confronting Black Jacobins, as well as The Apocalypse of Settler Colonialism, all published by Monthly Review Press—has played an important role in this renewal of black radical scholarship.

The last few years have also seen an explosion of interest in racial capitalism, within the broad historical-materialist tradition, particularly in studies of the role of slavery in the origins of industrial capitalism—a theme already present in Marx’s famous chapter on “The Genesis of the Industrial Capitalist” in Capital, but long downplayed. In addition to Horne’s work, recent pathbreaking accounts include Sven Beckert’s Empire of Cotton (Knopf, 2014), Edward E. Baptist’s The Half Has Never Been Told (Basic, 2014), and Walter Johnson’s River of Dark Dreams (H4arvard University Press, 2017). In January 2017, Johnson opened a discussion in Boston Review titled “Race Capitalism Justice,” arguing that slavery should be placed at the core of any analysis of capitalism as a racial system and raising fundamental questions of justice and humanity that extend to the present day. Johnson’s essay was accompanied by perceptive responses from N. D. B. Connolly, Peter James Hudson, Peniel Joseph, Peter Linebaugh, Donna Murch, Caitlin C. Rosenthal, Manisha Sinha, Stephanie Smallwood, Andrew Zimmerman, and others. Together their contributions form one of the most provocative and inspiring exchanges on slavery, capitalism, race, and justice we have ever seen. (“Race Capitalism Justice” is available as a separate publication, with an introduction by Kelley, at http://store.bostonreview.net.) Also notable is a discussion of “racialized capitalism,” and of expropriative capitalism more broadly, between Michael C. Dawson and Nancy Fraser in the spring 2016 issue of Critical Historical Studies. We believe that the importance of these new studies of racial capitalism, many of them informed by a historical-materialist perspective, cannot be exaggerated. Interested readers will find no better place to start than Horne’s essay in this issue of MR.

Riccardo Bellofiore’s article in this issue, “The Multiple Meaning of Marx’s Value Theory,” will be challenging to many readers not familiar with the more specialized discussions in this area. Nevertheless, we have chosen to publish it here because it represents, in our view, a state-of-the-art treatment written with admirable concision and encompassing many of the major breakthroughs made in recent years in the understanding of Marx’s theory. It therefore deserves the widest possible readership.

Ambalavaner Sivanandan, author of “Imperialism in the Silicon Age,” published in the July–August 1980 issue of Monthly Review (reprinted with permission from the autumn 1979 issue of Race & Class), died on January 3, 2018, at the age of ninety-four. Sivanandan was one of the world’s foremost analysts of the intersections of race, class, and imperialism. In 1972, he became director of the Institute of Race Relations (IRR) in Britain, and shortly thereafter the editor of its journal, Race, soon renamed Race & Class, which emerged under his editorship as the leading English-language periodical covering the interrelationship between racism and imperialism. Sivanandan’s many luminous writings on capitalism and race gave the journal a strong theoretical foundation. In 1998, he won the Commonwealth Writers’ Prize in the first-book category for Europe and South Asia, for his novel When Memory Dies.

Sivanandan was born in 1923, the son of a postal service worker in Sri Lanka. He studied at the University of Ceylon, graduating with a degree in economics, and became one of the first “native” bank managers. He emigrated to Britain after the race (racist) riots of 1958. Unable to obtain work in banking, he retrained as a librarian, and in 1964 was appointed chief librarian at the IRR in London. In the early 1970s, an internal struggle broke out at the institute between the staff and scholars on one side, and the management board on the other. Most of the board members were forced to resign, and Sivanandan, who had played a leading role in the conflict, was appointed as director, followed by his appointment as editor of Race & Class. This opened the way to a major new articulation of black politics in the United Kingdom. As Dominic Alexander has written (Counterfire, January 4, 2018), for Sivanandan, “Black was a ‘political colour’ which ought to produce solidarities against the racist structures of capitalism.” Under his leadership, the IRR did not seek primarily to speak to power directly by appealing to the establishment discourse, but chose instead to “speak from,” i.e., to represent the views of victims of racial discrimination (“A. Sivanandan,” IRR, http://irr.org.uk). Most important, the IRR emphasized that the presence of immigrants of color in Britain was a product of its colonial and imperialist history. Imperialism and race could therefore never be treated or understood separately.

Sivanandan was unique among modern social theorists in his capacity to write penetrating works about economics, culture, race, and capitalism, while also earning renown as a major novelist. He worked as an organic intellectual in the best Gramscian sense. Those with a sense of history who read (or reread) his “Imperialism in the Silicon Age” today will be amazed by the prescience of his survey, almost forty years ago, of many of the major tendencies—technological and cultural as well as economic—that have become pervasive in our time. This is a testimony not only to his breadth of understanding, but also to the enormous power of the historical-materialist method when coupled with a rock-solid revolutionary perspective. (Readers may also be interested in his short piece on “Capitalism, Globalization, and Epochal Shifts” in the February 1997 issue of MR, a follow-up to his earlier essay.) As Sivanandan wrote in “Imperialism in the Silicon Age”: “The contradiction between the heightened centralization in the ownership of the means of production—made possible not only by the enormous increase in the level of productivity but also by the technological nature of that increase—and the social nature of production (however attenuated) can no longer be mediated by liberal democracy but by corporativism, with an accompanying corporate culture, and state surveillance to go with it” (37).

Correction: In endnote 1 to John Bellamy Foster and Brett Clark’s “Women, Nature, and Capital in the Industrial Revolution,” in the January 2018 issue, the name of a coeditor of the collection Social Reproduction Theory was incorrect. It should read “Tithi Bhattacharya.”

The Apocalypse of Settler Colonialism
Two Lives on the Left