Dear Reader, we make this and other articles available for free online to serve those unable to afford or access the print edition of Monthly Review. If you read the magazine online and can afford a print subscription, we hope you will consider purchasing one. Please visit the MR store for subscription options. Thank you very much. —Eds.
Notes from the Editors
by The Editors
(May 01, 2018)
Topics: Education Media Movements Places: Americas Europe United Kingdom United States 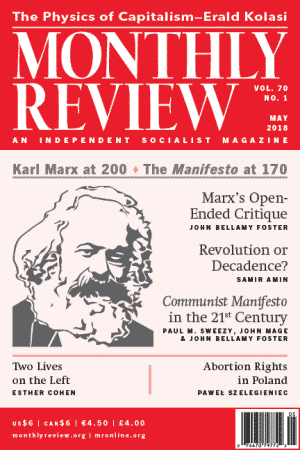 Over the last few years, MR and Monthly Review Press have published several special issues and books on the restructuring and privatization of K–12 education (see the July–August 2011, June 2013, and March 2016 issues of MR, along with John Marsh’s Class Dismissed, Henry A. Giroux’s America’s Education Deficit and the War on Youth, Howard Ryan’s Educational Justice, and Gerald Coles’s Miseducating for the Global Economy). However, we have paid considerably less attention to related developments in higher education (with notable exceptions, such as David Noble’s Digital Diploma Mills and Joe Berry’s Reclaiming the Ivory Tower). This is mainly because neoliberal restructuring at the university level has seemed until recently much less advanced and crisis-ridden than in elementary and secondary education, but also because of a shortage of critical, political-economic analyses that go to the root of the problem.

Nevertheless, a number of broad trends in higher education have become clear. First, public funding for most state universities has sharply declined, leaving the system increasingly dependent on student loans, whereby students bear the costs and risks of their own education, in what is presented as a “consumer” model. Second, for-profit universities have expanded rapidly, with an often predatory focus on non-traditional students and online courses, also made possible by loans. Third, both the new for-profit institutions and traditional universities increasingly rely on non-tenure-track faculty—adjunct and visiting professors, lecturers, and others—to do more and more of the teaching, with a resulting increase in academic hierarchies, including the proletarianization of teachers at the bottom rung. Fourth, administrative bureaucracy has steadily grown, especially at large research universities, where the share of school budgets going to administrators now frequently surpasses that for total faculty salaries, and university presidents and provosts often receive Wall Street-level compensation. Fifth, state universities increasingly depend on private donors who drive decisions on the direction of higher education. Sixth, wealthier universities have amassed huge surpluses and endowments, in some cases totaling billions of dollars, which are invested in the financial sector. Seventh, forms of scientific management have been introduced, forcing qualitative modes of knowledge, teaching, and research into narrowly quantitative metrics of “value added”—ostensibly to increase efficiency and raise academic standards, but really to undermine faculty power and as a means of marketizing and controlling all levels of higher education. Together these changes represent a frontal assault on academic freedom as well as critical and creative thinking throughout the university system.

Yet while all these processes are by now more or less well-known, they are nonetheless treated superficially and piecemeal in most left analyses, with little deep, critical understanding of their inner political-economic logic, the means by which these changes are introduced, or the intentionality of the people and groups driving this restructuring of the university. Too often, critical analyses begin and end with a shallow treatment of neoliberalism—a notion often presented in purely ideological terms, constituting little more than abstract verbiage, with scant consideration of material and structural relations. Those wishing to resist the tendencies outlined above thus lack the strategic means of fighting back, often falling into the very ideological traps (reification, commodity fetishism) that they seek to overturn.

It is here that U.S. opponents of these trends have the most to learn from their British counterparts. In many ways, the restructuring and marketization of universities in the United Kingdom is more advanced than in the United States, precisely because of Britain’s more centralized and consolidated model of higher education. Its elite schools, Oxford and Cambridge, along with the University of London, are all public institutions, and Parliament takes a far more active role in the funding and organization of universities than does Congress in the more decentralized, state-based system in the United States. In the wake of the Great Financial Crisis, the Tory-led coalition government initiated a massive and accelerated marketization process across higher education. In response, in late February and March 2018—even as these notes were being written—a massive university strike wave, the largest in modern British history, seized the country’s campuses. The uprising first centered on the austerity-driven restructuring of pensions, but quickly expanded into a wider revolt against the marketization of universities. It is not surprising, then, that the most penetrating critiques of the destruction of higher education have come from British theorists. The most important of these, in our view, have been David Ridley’s series of blog posts “Willetts the Conqueror” (http://hemarketisation.wordpress.com, and reposted on MR Online) and Andrew McGettigan’s The Great University Gamble (Pluto, 2013).

Ridley’s “Willetts the Conqueror” series is a critical analysis focusing on the 2017 memoir A University Education by David Willetts, Minister of State for Universities and Science from 2010–14 in the Conservative-led coalition government. In an introduction, Ridley writes that he “originally approached the book with a very simple question: ‘Is Willetts an “idiot”…who genuinely believes in the power of competition, or is he a cynic that expounds what Philip Morowski calls neoliberal “double truth” to hide the harsh-reality of corporate asset-stripping of previously state-protected public goods?’” Instead, Ridley unexpectedly discovers in Willetts’s memoir confirmation of a thesis he himself had derived independently, based on monopoly capital theory: the idea that renewed competition under monopoly capitalism represents merely “a momentary reorganization of a wider oligopolistic corporate capitalist system looking for a temporary boost to stagnating profits overall.”

Building on Paul A. Baran and Paul M. Sweezy’s Monopoly Capital, Harry Braverman’s Labor and Monopoly Capital, and John Bellamy Foster, Robert W. McChesney, and R. Jamil Jonna’s “Monopoly and Competition in Twenty-First-Century Capitalism” in the April 2011 issue of MR, Ridley argues that “the key to the shift from liberal to neoliberal economic theory lay in the latter’s acceptance of monopoly as the successful outcome of competition” (“The Myth of the Market,” Marketisation of Higher Education blog, December 10, 2017; “Willetts the Conqueror: Introduction”). As he later explains, in such a monopolistic outcome, “saturated markets with multi-national oligopolies controlling prices and sitting on mountains of cash…are [justified as] competitive as long as they are the result of competition (at some stage in the past, no matter how long ago) and are open to the possibility of competition (at some point in the future, no matter how remote or unlikely)” (“Willets the Conqueror,” Part 2). Despite its emphasis on competition, neoliberalism thus cannot be viewed apart from its acceptance of monopoly as the direct outcome of competition.

Armed with this critique, Ridley lucidly deconstructs Willetts’s memoir and what it reveals about the logic of the neoliberal restructuring of the university, going far beyond most other analyses. He points out that, in Willetts’s own words, the project’s main goal was to ensure that “at least one big British based global higher education chain would emerge,” rivalling the giant U.S. higher education multinationals (“Willets the Conqueror,” Part 1). But this first required the creative destruction of the entire UK higher education system. All aspects of education—teaching, research, knowledge exchange—were ideally to be reduced to a single coin of the realm or quantitative metric, tied to the financial system through student loans. Quantitative proxies for excellence, such as employment destinations of students, retention, and student satisfaction, were created to guide the management of student “human capital,” and educational “value added” (see “Willetts the Conqueror,” Part 3). Faculty research was likewise to be evaluated by metrics, through the imposition of an artificial hierarchy of journals and book publishers, thereby commercially enclosing academic research and creativity, to be determined henceforth by a few elite venues, each with their own inflated “impact factors.” Higher education was to be increasingly standardized, based on the reproduction of lectures by star professors and their use for mass online education, with a relatively small number of dismally paid lower-tier academics doing the remaining proletarianized grunt work. Students were considered mere consumers, financing their education largely through loans, who would supposedly be given the metrics necessary to calculate their own risks and potential “value added.”

Ultimately, the whole marketization scheme aimed to create a surplus for universities, operating in effect as profit-making entities, even when officially designated as public enterprises. As Ridley, following McGettigan, concludes, the entire process of breaking down faculty power through the use of quantitative metrics had as its alpha and omega the neoliberal quest for the “one metric to rule them all” (“Willetts the Conqueror,” Part 3). Willetts thus emerges in his account as “the Sauron of higher education,” seeking to transform UK universities into “competing multinational corporations through…a ‘center-periphery model of exploitation’” on an imperial scale (“Willetts the Conqueror,” Part 4). Institutions of higher education, long viewed as strongholds of the ivory tower, are being transformed into simply another conduit for what Sweezy called “the financialization of the capital accumulation process” (“More (or Less) on Globalization,” MR, September 1997).