Dear Reader, we make this and other articles available for free online to serve those unable to afford or access the print edition of Monthly Review. If you read the magazine online and can afford a print subscription, we hope you will consider purchasing one. Please visit the MR store for subscription options. Thank you very much. —Eds.
by Paul M. Sweezy, John Mage and John Bellamy Foster
(May 01, 2018)
Topics: Marxism Movements Revolutions Places: Global 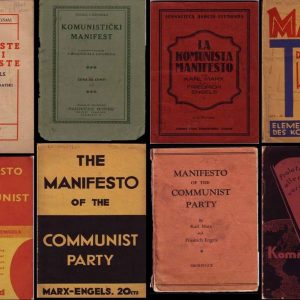 For the 150th anniversary of the Communist Manifesto, MR cofounder and longtime editor Paul M. Sweezy (1910–2004) wrote an article titled “The Communist Manifesto Today,” published in the May 1998 issue of MR. Recently a special request was made by our friends in Vietnam for a statement on the Manifesto for its 170th anniversary. In response, John Mage and John Bellamy Foster have revised Sweezy’s original essay, keeping almost all of it intact, but with a new opening and conclusion, updated for our time. The article was also given a new title and attributed to all three authors. Interested readers are encouraged to compare this version to Sweezy’s original essay, available to subscribers in the magazine’s online archive at https://monthlyreviewarchives.org.

The Crises of Capitalism

Eighteen forty-eight, when the Manifesto was written, was a crisis year in Europe. Twenty-eighteen is the tenth year of an endless crisis for a now fully globalized capitalist economy. What Karl Marx and Frederick Engels said about “the commercial crises [that] by their periodic return, put on its trial, each time more threateningly, the existence of the entire bourgeois society” is just as applicable to our own time. And so is the diagnosis of the basic cause: “In these crises,” they wrote, “there breaks out an epidemic that in all earlier epochs would have seemed an absurdity, the epidemic of overproduction.” Today this might be better formulated to read “an epoch of overproduction of the means of production.” Bourgeois economics still does not get it, and probably never will.

The Great Financial Crisis and the Great Recession began in the United States in 2007-08 and quickly spread across the globe, marking what appears to be a turning point in world history. Although this was followed within two years by an extended recovery phase, the weakest in the last century, the world economy ten years after the onset of the crisis is still in the doldrums. The United States, Europe, and Japan remain caught in a condition of slow growth and financial instability, with new economic tremors appearing all the time and the effects spreading globally. The one bright spot in the world economy, from a growth standpoint, has been the seemingly unstoppable expansion of a handful of emerging economies, particularly China. Yet the continuing stability of China is now also in question, especially insofar as it depends on a high degree of integration with global capitalism. Hence the general consensus among informed economic observers is that the world capitalist economy is facing the threat of long-run economic stagnation (complicated by the prospect of further financial deleveraging), sometimes referred to as the problem of “lost decades.” It is this issue of the stagnation of the capitalist economy that has emerged as the big question worldwide (setting aside the issue of the environment), even for all serious bourgeois economists.

The Manifesto’s analysis of the succession of crises that “put on its trial, each time more threateningly, the existence of the entire bourgeois society” remains central to any attempt to predict the events of the coming years. The long weak recovery was made possible only by an unprecedented global expansion of debt, both public and private, itself made possible only by the forced reduction of interest rates to levels similarly without precedent. This flood of new debt went not into productive investment, as shown by the great stagnation in growth, but into a global inflation of asset prices. The result was the capture of almost all such gains as were produced in this last decade by that very small percent of the world’s population who owned the world’s assets, whether real estate or securities. But global capitalism remains caught in the contradiction posed by the necessity of continuous expansion of profits through the capture of surplus value from the exploitation of labor, and the necessity of the valorization of that surplus value through either consumption or new investment. New investment in productive capacity, in a global capitalism plagued by excess capacity, is increasingly more a problem than a solution for the system. And the maintenance of workers’ consumption, given the ever-increasing downward pressure on wages worldwide (and upward pressure on rents caused by asset inflation), has occurred only through a massive increase in working-class debt; in the United States today a majority of wage workers have in effect no net savings at all. The commercial cycle identified by the Manifesto is still very much a certainty in an uncertain world. The recovery from the 2007–08 great crisis is in its final phase, and the techniques of new debt and interest rate suppression that enabled the last recovery are no longer available. The immediate prospect can only reinforce the continuing salience of the Manifesto’s phrase “each time more threateningly.”

Where Are We Going?

Marx and Engels were dedicated revolutionaries and firmly believed that the inherent and ineradicable contradictions of capitalism would generate a growing and ultimately successful revolutionary struggle to overturn the system and put in its place a more humane and rational one. But did their analysis allow for, or perhaps even imply a different historical outcome? The answer, we think, is unequivocally yes. Early on in the Manifesto, indeed on the first page of the first section entitled “Bourgeois and Proletarians,” an oft-quoted passage reads:

The history of all hitherto existing society is the history of class struggles. Freeman and slave, patrician and plebeian, lord and serf, guild-master and journeyman, in a word, oppressor and oppressed, stood in constant opposition to one another, carried on an uninterrupted, now hidden, now open fight, that each time ended, either in a revolutionary reconstitution of society at large, or in the common ruin of the contending classes.

Nothing more is said about “the common ruin of the contending classes” in the Manifesto, most likely because Marx and Engels did not consider it a likely outcome of the class struggle under capitalism. But if we look around us in the world today—and take into account the extent to which capitalism is destroying or undermining the natural foundations of a sustainable economy—we must surely reinstate “the common ruin of the contending classes” as a very realistic prospect in the historically near future.

What Should We Be Trying to Accomplish?

We should be trying to impress on the peoples of the world the truth about capitalism, that it is not, as bourgeois ideologists want us to believe, the “end of history,” but that its continued existence can really bring the end of history. Does the Manifesto offer any help in this respect? Perhaps—if we read it carefully and interpret it imaginatively. In a too-often neglected passage, Marx and Engels introduce a new theme into their analysis.

Finally, in times when the class struggle nears the decisive hour, the process of dissolution going on within the ruling class, in fact within the whole range of old society, assumes such a violent, glaring character that a small section of the ruling class cuts itself adrift, and joins the revolutionary class that holds the future in its hands. Just as, therefore, at an earlier period, a section of the nobility went over to the bourgeoisie, so now a section of the bourgeoisie goes over to the proletariat, and in particular a portion of the bourgeois ideologists, who have raised themselves to the level of comprehending theoretically the historical movement as a whole.

For Marx this reflected what he understood (see especially his discussion of “Pre-Capitalist Economic Formations” in the Grundrisse) as “the age of dissolution” of class-property relations that brought down feudal society. A similar age of dissolution, we believe, would bring down capitalism in turn—although the dissolution of capitalist relations would necessarily take a different form.

Today we can see more and more within present-day capitalism, particularly in the wealthiest countries, the emergence of acute contradictions that are accelerating the breaking-up of the system, visible in the extremes of the polarization of income and wealth in all nations and globally, the corrosive interface of stagnation, financialization and neoliberal globalization, and—most of all—the accelerating planetary crisis that threatens all of humanity. These historical developments are behind “the dissolution [presently] going on within the ruling class,” evident in the growing instability of the state. Notwithstanding the continuing ideological role performed by bourgeois economics, there is no hiding the acute contradictions of our age, which every child can see. As the unfolding of capitalism’s deadly consequences proceed, more and more people, including not only revolutionary movements throughout the globe, but also “bourgeois ideologists who have raised themselves to the level of comprehending theoretically the historical movement as a whole,” will come to see what has to be done, if our species is to have any future at all. Our job is to help bring about this recognition in the shortest possible time—while there still is time.

The Physics of Capitalism
Revolution or Decadence?