Dear Reader, we make this and other articles available for free online to serve those unable to afford or access the print edition of Monthly Review. If you read the magazine online and can afford a print subscription, we hope you will consider purchasing one. Please visit the MR store for subscription options. Thank you very much. —Eds.
Notes from the Editors
by The Editors
(Dec 01, 2018)
Topics: Agriculture Ecology Marxist Ecology Places: Americas United States 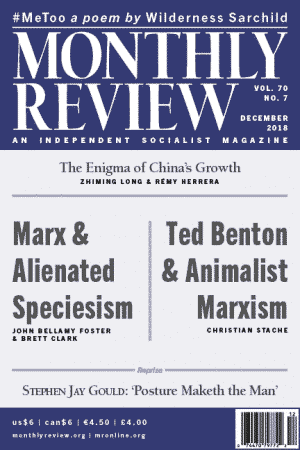 With the dramatic rise of eco-Marxism in recent years, a corresponding revolution has been taking place in studies of the human-nonhuman animal relationship. Previous critical analyses with respect to the position of animals in human society have been largely dictated by animal-rights discourse. Much of this was pioneered by late nineteenth-century socialist thinkers such as Henry Salt. However, with the development of the animal-rights movement since the 1970s, the dominant perspective has been a form of liberal utilitarianism, represented by figures such as Peter Singer in his Animal Liberation (HarperCollins, 1975). This analysis focuses on the moral worth of nonhuman animals, as conceived by human beings employing utilitarian ethics, and on the rights of animals in the face of widespread abuse. This has been accompanied by the development of ethology, or comprehensive studies of animal behavior. All of this has fed into various ecological/animal-rights struggles aimed at the protection of nonhuman species.

What ecosocialist theory has brought to these questions in recent years is a materialist perspective. This focuses not so much on animal rights as on: (1) the transformations in the material conditions of nonhuman animals; (2) the relationship of this to the wider ecological crisis; (3) the role of capitalism in these developments, including how the metabolic rift affects animal species; and (4) the merciless, horrific, and irrational conditions imposed on animals in factory farms. Although Monthly Review and Monthly Review Press have only played a small role in these developments thus far, various MR authors, including Richard York, MR associate editor Brett Clark, Stefano B. Longo, and Rebecca Clausen have been leading developers of the new critical-realist approach to animals in society, which has recently been given the name “political ethology.” York, who is a coauthor of The Ecological Rift (Monthly Review Press, 2010) with Clark and John Bellamy Foster, and who is currently the chair of the Animals and Society Section of the American Sociological Association, has published a series of pathbreaking articles on animals and society. One of these, “Animals in the World: A Materialist Approach to Sociological Animal Studies” (Journal of Sociology, 2017), written with Longo, amounts to a theoretical manifesto for political ethology, which is presented as a materialist approach parallel to political economy; one that emphasizes the intersections of ethological “conditions with [the] political (socially constructed) processes and material aspects (e.g. economic) of human societies.” Another leading work in this vein is The Tragedy of the Commodity: Oceans, Fisheries, and Aquaculture (Rutgers, 2015) by Longo, Clausen, and Clark. This book employs Karl Marx’s concept of metabolic rift to examine the ecological transformations affecting such species as bluefin tuna and Northwest salmon. The application of metabolic-rift analysis to political ethology was pioneered by environmental sociologist Ryan Gunderson in “The Metabolic Rifts of Livestock Agribusiness,” published in Organization & Environment in Fall 2011. In their Creating an Ecological Society (Monthly Review Press, 2017), Fred Magdoff and Chris Williams discuss the extreme cruelty and irrationality of “raising farm animals using industrial farming practices” on top of the rift in the soil-nutrient cycle and the dangers to humans (for example, through the excessive use of antibiotics) that it generates.

But if a powerful new tradition of what could be called the historical-materialist political ethology of animals in the world is now developing, the question arises: How does this fit with classical historical materialism? The issue of the incompatibility of Marx’s analysis with animal rights, focusing on the writings of the early Marx, was famously raised by pioneering ecosocialist Ted Benton in his article “Humanism = Speciesism: Marx on Humans and Animals” (Radical Philosophy, Autumn 1988), later followed by his book Natural Relations (Verso, 1993). Benton argued that parts of Marx’s argument were ambiguous and contradictory, but that the main line of his analysis of the human-animal relation pointed to a dualist “speciesism.” Since then, Benton’s charge of speciesism, directed at Marx, has been widely adopted and seldom questioned on the left, with other thinkers adding to but rarely departing significantly from Benton’s thesis.

In this issue of Monthly Review, two separate but complementary articles, representing different critical approaches, forcefully challenge Benton’s thesis that Marx’s work was speciesist in orientation. Christian Stache’s “On the Origins of Animalist Marxism” focuses minutely on Benton’s argument and Marx’s Economic and Philosophical Manuscripts of 1844 (or Paris Manuscripts), refuting Benton’s contentions point by point. Foster and Clark’s “Marx and Alienated Speciesism” assesses the historical-intellectual background behind Marx’s arguments on humans and animals, placing it in the context of the influence exercised on his thought by Epicurus, Hermann Samuel Reimarus, Ludwig Feuerbach, Charles Darwin, and others. This allows them to explicate the theoretical propositions underlying Marx’s analysis and to demonstrate the antispeciesist and antidualist aspects of his evolutionary-materialist understanding. In the process, they explain how Marx’s view of animals in the world came to be integrated with his theory of metabolic rift and his critique of capitalism. Borrowing a concept from Bradley J. Macdonald’s earlier scrutiny of Benton’s argument, they argue that Marx was a strong critic of the “alienated speciesism” generated by capitalist commodity production.

The October release of the special 2018 report, Global Warming of 1.5°C (http://ipcc.ch/report/sr15/), by the United Nations Intergovernmental Panel on Climate Change (IPCC) has drawn considerable attention due to its findings that climate change is mutating rapidly and with deadly consequences. Growing scientific knowledge on climate change has demonstrated that it is no longer sufficient, as was once thought, simply to limit the concentration of carbon in the atmosphere so as to stop short of a 2°C increase in global average temperature. Rather, it is now recognized that it is essential to aim at no more than a 1.5°C increase, which would at this point require not only much sharper annual carbon reductions so as to reach zero net emissions by 2050, but also the introduction of negative emissions technologies that would suck some of the carbon out of the atmosphere. This means, as the report conveys, that massive social changes on an unprecedented scale need to be made around the globe, and in a very short period of time historically, i.e., in a matter of two or three decades, commencing immediately. Some have objected that the new IPCC report does not directly address the worst dangers, i.e., the immense climate feedbacks if the world proceeds on the current path that would take it to 3°C or higher. However, this seeming gap in the analysis is a product of the specific charge given to the scientists who were chosen by the IPCC to write this special report: to address the causes and consequences, as well as possible mitigation paths associated exclusively with 1.5°C and 2°C increases.

Nevertheless, this new IPCC special report should be a wakeup call to humanity. As Ian Angus noted in Climate & Capitalism (“IPCC Says 1.5° Will Be Bad and 2.0° Will Be Far Worse, Calls for Change NOW,” climateandcapitalism.com, October 8, 2018) it implicitly challenges the 2016 Paris Agreement as far too weak to be considered an adequate response to climate change. One vital aspect of the special report, as Angus also notes in Climate & Capitalism (“IPCC Report Puts Global Warming Crisis in Anthropocene Framework“), is its use of the Anthropocene to account for the dangers of climate change in Earth-System terms. As stated in the Executive Summary of the report: “These enabling conditions [for achieving a 1.5°C limit] have many systemic dimensions—geophysical, environmental-ecological, technological, economic, socio-cultural and institutional—that may be considered through the unifying lens of the Anthropocene, acknowledging profound, differential but increasingly geologically significant human influences on the Earth System as a whole.” The importance of such a framing of the problem is that it “emphasizes the global interconnectivity of past, present and future human-environment relations.” In short, as Frederick Engels might have said, our complex interactions with the Earth System are teaching us that dialectics is a necessary condition of human survival itself.

We are pleased to note the publication last month by Yale University Press of Hannah Holleman’s Dust Bowls of Empire: Imperialism, Environmental Politics, and the Injustice of “Green” Capitalism. Through a thoroughgoing historical examination of the greatest ecological catastrophe of the 1930s, including its relation to settler colonialism and imperialism, Holleman throws light on the global ecological destruction that characterizes our own times, how this is related to pervasive conditions of environmental injustice, and why revolutionary ecological and social change is now our only alternative. Holleman is a professor of sociology at Amherst College, a member of the Monthly Review editorial committee, and a frequent contributor to MR. Congratulations Hannah!