Dear Reader, we make this and other articles available for free online to serve those unable to afford or access the print edition of Monthly Review. If you read the magazine online and can afford a print subscription, we hope you will consider purchasing one. Please visit the MR store for subscription options. Thank you very much. —Eds.
Notes from the Editors
by The Editors
(Jan 01, 2019) 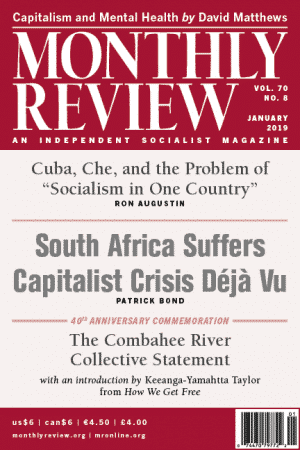 In this issue of Monthly Review, we are reprinting the celebrated Combahee River Collective Statement, which first appeared as a movement document in April 1977, with the final, definitive version published in Zillah Eisenstein, ed., Capitalist Patriarchy and the Case for Socialist Feminism (Monthly Review Press, 1979). Our goal in reprising it in the present issue is not only to commemorate the fortieth anniversary of the publication of this historic document by black lesbian feminists and socialists, but also, and more importantly, to underscore its continuing critical significance as a classic statement on interlocking oppressions, crucial to the struggles of our time. In that regard, we are also including Keeanga-Yamahtta Taylor’s introduction to How We Get Free—Black Feminism and the Combahee River Collective (Haymarket Books, 2017). How We Get Free, edited by Taylor, is an indispensable guide to the history of the Combahee River Collective, which includes in-depth interviews of the three principal drafters of the Combahee River Collective Statement, Barbara Smith, Beverly Smith, and Demita Frazier.

The Combahee River Collective Statement and Taylor’s introduction (entitled here “Black feminism and the Combahee River Collective,” after the subtitle to How We Get Free) speak for themselves. Nevertheless, adding a few, brief supplementary notes for MR readers seems appropriate. The Combahee River Collective arose in the early 1970s in Boston as a breakaway group of the National Black Feminist Organization. The collective’s name was taken from Harriet Tubman’s great raid on the Combahee River in South Carolina in June 1863, which freed over 750 people who had been enslaved. The reason for choosing that name for the collective was to lay stress on a historic action. As the collective members wrote of their philosophy in the statement, “a combined antiracist and antisexist position drew us together initially, and as we developed politically we addressed ourselves to heterosexism and economic oppression under capitalism.”

The commemoration of the Combahee River Collective Statement comes at a time in which a return to the kind of radical thought and practice that it represents is desperately needed. The United States in recent years has seen the growth of a powerful reactionary movement, based in white supremacism and an alliance between elements of the lower-middle class and monopoly-finance capital. This regressive, and in some cases neofascist, politics, symbolized by the presence of Donald Trump in the White House, has increasingly targeted people of color, immigrants, women, LGBTQ people, indigenous populations, and the working class as a whole, as well as peoples in the global South. Here, the Combahee River Collective Statement has much to teach us about building solidarity, which necessarily begins with the recognition of the multiple oppressions in which individuals are historically intermeshed. In order to address such interlocking oppressions, the Combahee River Collective Statement introduced the term “identity politics,” not as a way of dividing people, but as a way of developing a new collective strategy guided by those experiencing the worst forms/combinations of oppression. Those, such as black women, caught in this dire situation clearly had no choice but to take a revolutionary stance. They recognized that “being on the bottom,” as Michele Wallace (quoted in the statement) argued, meant that “we would have to do what no one else has done: we would have to fight the world.”

The members of the Combahee River Collective were all committed revolutionaries. As Barbara Smith recently explained, “the reason Combahee’s Black Feminism is so powerful is because it’s anticapitalist. One would expect Black feminism to be antiracist and opposed to sexism. Anticapitalism is what gives it the sharpness, the edge, the thoroughness, the revolutionary potential” (How We Get Free, 69). “Liberation of all oppressed people,” the Combahee River Collective Statement declared, “necessitates the destruction of the political-economic systems of capitalism and imperialism as well as patriarchy.”

We are extremely pleased to announce that Monthly Review Press author Kohei Saito has won the prestigious Deutscher prize for 2018 for his Karl Marx’s Ecosocialism: Capital, Nature, and the Unfinished Critique of Political Economy (Monthly Review Press, 2017). There is no doubt that this book constitutes one of the great works of Marxian theory in our time. Congratulations, Kohei!

For information on the Deutscher Prize, see http://deutscherprize.org.uk/wp. Other recent winners of the Deutscher Prize include William Clare Roberts in 2017 for Marx’s Inferno (Princeton University Press, 2016), Andreas Malm in 2016 for Fossil Capital (Verso, 2015), and Tamás Krausz in 2015 for Reconstructing Lenin (Monthly Review Press, 2014). Karl Marx’s Ecosocialism and Reconstructing Lenin can be purchased from the Monthly Review Press Store.

Monthly Review Press has just published Michael E. Tigar’s remarkable book, Mythologies of State and Monopoly Power, which draws on legal cases, philosophy, literature, and Tigar’s own fifty years as an attorney, activist, and teacher to eviscerate mythologies surrounding the U.S. criminal justice system, racism, free expression, workers’ rights, and international human rights. Michael Steven Smith, cohost of Law and Disorder Radio and former board member for the Center for Constitutional Rights, declares that the book is “beautifully written, learned, and profoundly insightful. In a better world, Michael Tigar would be a justice in the United States Supreme Court.” Bernadine Dohrn, clinical law professor, Northwestern University School of Law, states, “Michael Tigar has written a must-read for prisoners, law students, activists, artists, lawyers, and anyone concerned with where we are and how to fight back. You’ll never forget his fictional debate between Lucy Parsons and Clarence Darrow.”

In November 2018, MR Online launched a new platform called Monthly Review Essays (https://mronline.org/category/monthly-review-essays/). Our first essay is István Mészáros, “The Historic Anachronism and Necessary Supersession of the State,” taken from Chapter One of his major, unfinished work, Beyond Leviathan. For more on Mészáros, see the Notes from the Editors in the December 2017 issue of Monthly Review (vol. 69, no. 7).

Last year saw the return, decades after its demise, of the iconic magazine Science for the People, along with the relaunching of Science for the People as an organization with chapters across the United States. The revived Science for the People began its new series with a special issue on geoengineering, the various articles of which were published online over several months in Fall 2018. This included an article by MR editor John Bellamy Foster (copublished with Monthly Review), entitled “Making War on the Planet: Geoengineering and Capitalism’s Creative Destruction of the Earth.” The entire issue has now been posted at the Science for the People website. We invite MR readers to explore this important body of work and to support this vital institution.

Michael Roberts in the United Kingdom writes a regular blog on economics from a Marxian standpoint, which we sometimes find stimulating. His November 27, 2018, blog was entitled “Financialization or Profitability?” (http://thenextrecession.wordpress.com) and rejects the concept of financialization in the analysis of contemporary capitalism—an outlook with which we strongly disagree. Surprisingly, Roberts claims that it was the sociologist Greta Krippner who “first used the term” financialization, presumably in an article in 2005. He misses the fact that Krippner’s work simply represented one of the first widely accepted establishment-academic uses of the concept, refashioned to make it compatible with mainstream sociology and a limited reformist politics. Krippner of course cannot be credited with having introduced the term “financializaton,” which had been circulating for more than a decade (having originated at a time when she was in the process of getting her B.A.). Indeed, anyone who has read her book, Capitalizing on Crisis (2011), knows that she devotes much of the introduction to considering, even if downplaying, earlier usages of the concept by Marxian theorists, including Harry Magdoff and Paul M. Sweezy—the editors of Monthly Review, who spent decades analyzing how financialization arose out of a stagnating monopoly capitalist economy in works such as Stagnation and the Financial Explosion (1987)—and Giovanni Arrighi, a leading world-systems theorist.

The actual term “financialization” first arose in the early 1990s, principally in political analyst Kevin Phillips’s Boiling Point (1993) and his Arrogant Capital (1994), and in Arrighi’s The Long Twentieth Century (1994). In the September 1997 issue of Monthly Review, Sweezy described the fundamental economic issue of our time as “the financializaton of the capital accumulation process” (“More [or Less] on Globalization,” 3). It was radical and Marxian economics that provided the earliest and what is still the most critical analysis of the financialization of the capital accumulation process, as in the work of figures such as Robert Pollin, Jan Toporowski, Costas Lapavitsas, Rama Vasudevan, and Prabhat Patnaik—along with John Bellamy Foster and Fred Magdoff’s The Great Financial Crisis (2009) and Foster and Robert W. McChesney’s The Endless Crisis (2012). Indeed, all of this ultimately goes back to foundations laid by such thinkers as Karl Marx, Rudolf Hilferding, V. I. Lenin, Thorstein Veblen, Rosa Luxemburg, and Michał Kalecki. It is part of a long and distinguished socialist tradition of the critique of finance capital.