Dear Reader, we make this and other articles available for free online to serve those unable to afford or access the print edition of Monthly Review. If you read the magazine online and can afford a print subscription, we hope you will consider purchasing one. Please visit the MR store for subscription options. Thank you very much. —Eds.
Notes from the Editors
by The Editors
(Dec 01, 2017)
Topics: History Marxism Philosophy Places: Americas United States 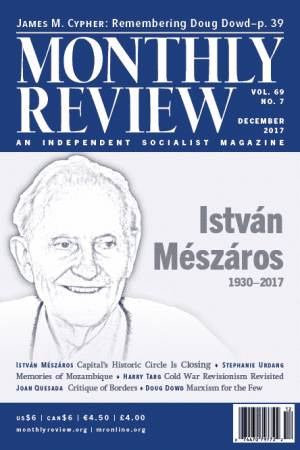 István Mészáros, who died near his home in Ramsgate, England, on October 1, 2017, at the age of eighty-six, was one of the foremost political philosophers of the late twentieth and early twenty-first centuries, and a leading Marxist theorist. Born in Hungary on December 19, 1930, he was raised by his mother, who worked in an airplane factory building engines. Falsifying his date of birth, at age twelve he began working in the same factory, making threads for bolts for the planes. The conditions were brutal: on one occasion he was not paid his due wage, but instead given a piece of brawn (meat from a pig’s head). Taking a bite, he realized it was full of hair, and vomited on the snow. The incident, he later recalled, helped ignite his lifelong hatred of exploitation and oppression.

In 1949, with the emergence of a Communist state in Hungary, Mészáros won a scholarship to the prestigious Eötvös University in Budapest. Only a few months later, he was almost expelled for publicly defending Georg Lukács—then under heavy attack within the Communist Party, having fallen into official disgrace in the extreme Stalinist atmosphere of the time—but the director’s motion of expulsion was rejected by the college council. In 1950, in response to the censoring of the National Theatre’s staging of Mihály Vörösmarty’s Hungarian classic Csongor és Tünde, denounced by the authorities as a “pessimist aberration,” he penned a meticulous defense of the play that was published in two consecutive issues of the literary review Csillag. The essay received the 1951 Attila József Prize, leading to the reincorporation of Vörösmarty’s work into the National Theatre repertoire and prompting Lukács to nominate Mészáros as his assistant at the Institute of Aesthetics at the University of Budapest.

From 1950 to 1956, Mészáros participated actively in the country’s cultural and literary debates as a member of the Association of Hungarian Writers, which he later wrote about in The Revolt of the Intellectuals in Hungary (1958). His 1956 essay “The National Character of Art and Literature” was chosen as the central thesis for the plenary meeting—presided over by the composer Zoltán Kodály—of the Petofi Circle, a group credited with laying the foundations for the Hungarian uprising of October–November of that year. He also edited the magazine Eszmélet (Consciousness), cofounded by Kodály, Lukács, and other leading cultural figures. In 1955, he met Donatella Morisi in Paris. They were married on February 14, 1956, with Lukács attending the ceremony. (They went on to have three children: Laura, born 1956; Susie, born 1960; and Giorgio, born 1962.) Mészáros graduated with a doctoral degree in philosophy. His dissertation, supervised by Lukács, was entitled Satire and Reality (1955). Around this time, Lukács designated Mészáros as his successor at the Institute of Aesthetics, and asked him to deliver his inaugural lectures on aesthetics, as an associate professor of philosophy. But in late 1956, Mészáros was forced to depart Hungary with his family, following the October uprising. Mészáros and Lukács remained close, and were often in touch until the latter’s death in 1971.

After leaving Hungary, Mészáros moved to Italy and taught for a short time at the University of Turin before taking a series of positions in the United Kingdom, at Bedford College in London (1959–61), the University of St. Andrews (1961–66), and the University of Sussex (1966–95), where he held the chair in philosophy. In 1971, he received the Isaac Deutscher Memorial Prize for his book Marx’s Theory of Alienation. The following year he took an academic leave from Sussex to accept his appointment as a senior professor of philosophy at York University in Toronto. This was to become a cause célèbre after the Canadian authorities refused to grant Mészáros a visa on the grounds that he posed a “security risk.” Numerous influential figures across the political spectrum, in both Canada and the United Kingdom, protested on his behalf. Eventually, a visa was granted and the Canadian foreign minister resigned. After three years at York, he returned to Sussex, where he taught until his retirement and appointment as emeritus professor in 1991. In 1995, he was elected to the Hungarian Academy of Sciences. That same year, he published what is widely regarded today as his magnum opus, Beyond Capital: Toward a Theory of Transition. It was based on this work that Venezuelan president Hugo Chávez declared that Mészáros “illuminates the path ahead. He points to the central argument we must make in order…to take the offensive—throughout the world—in moving toward socialism.” From the late 1990s on, Mészáros, along with his close friend Daniel Singer, became an important advisor to Monthly Review editors Harry Magdoff and John Bellamy Foster, as well as a frequent contributor to MR and Monthly Review Press. In 2008, Mészáros won Venezuela’s prestigious Libertador Prize for Critical Thinking.

It is difficult to give a general assessment of Mészáros’s work, because of its sheer scope and depth, and his insistence on advancing our strategic understanding of the transition to socialism, which he called “The Mountain We Must Climb.” No political philosopher of our age has reached nearly so far in terms of joining philosophy with political-economic critique, or in systematically addressing the question of the movement toward socialism. His works, beyond those already mentioned, include such important contributions as Lukács’s Concept of Dialectic (1972), The Work of Sartre (1978), Philosophy, Ideology, and Social Science (1986), The Power of Ideology (1989), Socialism or Barbarism (2001), The Challenge and Burden of Historical Time (2008), Historical Actuality of the Socialist Offensive (2009), The Structural Crisis of Capital (2010), Social Structure and Forms of Consciousness (2010–2011), and The Necessity of Social Control (2015). Social Structure and Forms of Consciousness developed his general critique of bourgeois ideology over the course of two volumes, The Social Determination of Method and The Dialectic of Structure and History. This was a work many years in the making. He was forced to interrupt it in order to focus on “the structural crisis of capital,” including the crisis of actually existing socialism, which led to Beyond Capital. It was only when Beyond Capital was completed that Mészáros was able to return to The Social Structure and Forms of Consciousness, which he regarded as integral to his whole dialectical perspective. Following the publication of The Dialectic of Structure and History in 2011, he concentrated all his efforts on the sequel to Beyond Capital, entitled Beyond Leviathan: Critique of the State. This unfinished work on the transition to socialism consists of three volumes: The Historic Challenge, The Harsh Reality, and The Necessary Alternative. All three were drafted at the time of his death, with the first volume close to its final form.

The critical framework underlying Mészáros’s system of thought is complex, extending the dialectical method of Hegel, Marx, and Lukács to our own age of “epochal transition.” It thus defies easy explanation. But three crucial elements in his dialectic stand out. First, it is necessary to focus on what he termed the capital system rather than capitalism, as a way of deepening the critique of capital, in line with Marx’s early formulation, while also extending this criticism to Soviet-type societies—where the capital system, in Mészáros’s interpretation, remained in many ways intact.

Third, in Mészáros’s system, as in that of Lukács, mediation is seen as the key to the Marxian dialectic. His interpretation of Marx’s theory of alienation focuses on the “second-order mediations,” the result of an alienated society, by which capitalism seeks to institute its reified and oppressive mode of social metabolic reproduction, so as to displace those “primary mediations” that directly address human social and natural needs. The critique of capital and the creation of a revolutionary praxis thus require transcending these second-order mediations. In this way, Mészáros’s analysis articulates an endlessly creative and liberating strategy for the long transition to socialism, necessitating the eventual withering away of the state, to be progressively replaced by communal structures.

A core aspect of Mészáros’s critique of the capital system is the ever-present and increasing danger of nuclear war, together with the advent of ecological crisis on a global scale—a topic on which he wrote with great force as early as 1971, in his Isaac Deutscher Memorial Lecture on “The Necessity of Social Change,” and later in Beyond Capital with his analysis of “the activation of capital’s absolute limits.” Many of these ideas, fundamental to contemporary ecosocialism, were brought together in his short book Socialism or Barbarism, which perhaps more than any other work of our time captures the driving imperative of revolutionary social change for the future of humanity.

Capital’s Historic Circle Is Closing
What Is Monopoly Capital?