Dear Reader, we make this and other articles available for free online to serve those unable to afford or access the print edition of Monthly Review. If you read the magazine online and can afford a print subscription, we hope you will consider purchasing one. Please visit the MR store for subscription options. Thank you very much. —Eds.
Notes from the Editors
by The Editors
(Feb 01, 2019)
Topics: Climate Change Ecology Places: Americas United States 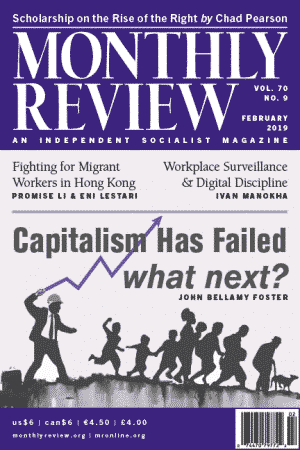 Climatologist James Hansen’s “Climate Change in a Nutshell: The Gathering Storm,” written in December 2018 and known as the Nutshell document, is, in our opinion, the single most important analysis currently available for general readers seeking to stay abreast of the science and politics of global warming. A mere fifty-five pages long, the Nutshell document was written for presentation as expert opinion in the Our Children’s Trust climate case, Juliana v. the United States. It was consciously composed in conformity with Albert Einstein’s principle: to be as simple as possible but never simpler. Hence, Hansen’s explanation of the various dimensions of the climate-change problem is at a level appropriate for educated non-scientists, such as a Chief Justice of the U.S. Supreme Court or a CEO of a major energy corporation.

Two things immediately struck us in reading the Nutshell document. First is the shift in Hansen’s general treatment of the climate-change problem to lay stress, throughout his presentation, on the core reality of the earth’s energy imbalance. He clearly believes that by emphasizing how anthropogenic greenhouse-gas emissions are causing the earth to take in more solar energy than it radiates outward, creating an energy imbalance in the Earth System and heating up the climate, it is possible to help individuals grasp the full enormity of what is at stake in this century and beyond.

Second, and more important, is Hansen’s criticism of the widely accepted treatment of negative emissions within science and within the overall political-economic hegemony. It is now part of the scientific consensus that attempts to stabilize climate change at a level of 350 parts per million (ppm) of carbon in the atmosphere—and in which the increase in average global temperature would be no more than 1.5°C above pre-industrial levels (increasingly recognized as the equilibrium solution with respect to the earth’s energy balance)—would require some negative emissions, or a drawdown of carbon in the atmosphere. Hansen argues that if the world community moves fast enough, it is still possible to achieve 350 ppm of carbon in the atmosphere while going no further, with respect to negative emissions, than those that can be brought about simply through improved forestry and agricultural practices. It would then be possible to avoid extremely costly attempts to implement a massive drawdown in the amount of carbon in the atmosphere through negative emissions implemented by geoengineering technology, namely bioenergy—burning trees, grasses, and other plant material to make electricity—and carbon capture and sequestration (BECCS). As Hansen himself states,

We, the scientific community, responded oddly to absence of effective international energy and climate policy. Instead of sounding a strong alarm, we added climate scenarios with massive “negative emissions” to IPCC documents. These are imaginary reductions that might be produced if fossil fuel power plants were replaced by power plants burning biofuels and if the CO2 emitted by the power plants were captured and buried permanently.

Implausibility of negative emissions on the required scale is readily apparent. Land to grow biofuels must compete with land to grow food. The task of capturing, transporting and storing the CO2 is enormous. NIMBY [Not in My Backyard] opposition to CO2 pipelines and CO2 storage would be great. The decisive factor likely would be cost.

Assuming a constant carbon-emission scenario, Hansen and his colleagues estimate that the cost of achieving the 695 gigatons in negative emissions that would be necessary to reach 350 ppm carbon concentration in the atmosphere by 2100 would cost $104–243 trillion. For comparison, the value of the world’s entire housing stock is currently estimated at $163 trillion (“‘Shameful’: What’s Driving the Global Housing Crisis,” Al Jazeera, November 3, 2018).

Further, such narrow direct-cost estimates exclude the incalculable social and environmental costs in terms of land area, fertilizer, and water requirements of BECCS on a planetary scale. As currently envisioned in some of the more ambitious climate scenarios, removing a trillion tons of carbon would require a land area equal to two Indias—around half as much land as is currently farmed globally—along with a quantity of freshwater approximating all of current agricultural usage (Abby Rabinowitz and Amanda Simson, “The Dirty Secret of the World’s Plan to Avert Climate Disaster,” Wired, December 10, 2017). Additionally, geoengineering schemes like solar-radiation management, which could create immense additional planetary rifts on top of climate change, are not a rational way to go. The only reasonable recourse for humanity is thus to reduce greenhouse-gas emissions, particularly carbon ones, at the maximum feasible rate, recognizing that this is a planetary emergency. Hansen’s Nutshell document emphasizes that leadership in this area must come from the United States as the country with by far the greatest historic responsibility for the carbon concentration in the atmosphere. At present, global carbon emissions must minimally decrease by 3 percent a year (and much more in the richer countries), as opposed to the 2 percent a year increase of recent decades. But accomplishing this will require an energy revolution, one that will also necessarily be a socioeconomic revolution—going against the logic of capitalism.

Leading Earth-System scientists warned in a 2018 report in the Proceedings of the National Academy of Sciences that “incremental linear changes to the present socioeconomic system are not enough to stabilize the Earth System…[which] may be approaching a planetary threshold that could lock in a continuing rapid pathway toward much hotter conditions—Hothouse Earth.… Avoiding this threshold by creating a Stabilized Earth pathway can only be achieved and maintained by a coordinated, deliberate effort by human societies to maintain their relationship with the rest of the Earth System.” This, they argue, would require massive and rapid changes in economic institutions, governance, technology, behavior, and values (Will Steffen, et al., “Trajectories of the Earth System in the Anthropocene,” Proceedings of the National Academy of Sciences 115, no. 33 [2018]).

Nevertheless, denial of the extent of the conflict between capitalism and the climate remains pervasive. Recently, former President Barack Obama, the World Resources Institute, and even radical economist Robert Pollin writing in New Left Review, have all separately supported the view that absolute decoupling of economic growth and carbon emissions is now feasible and has already been accomplished over several years in a handful of countries, including the United States. The implication is that, due to increasing efficiencies that will finally separate economic growth from carbon emissions, the goal of reaching zero carbon emissions mid–century is fully compatible with the continuing expansion of the capitalist system, to be accomplished by technical means, and without a wider ecological revolution that would mobilize the whole society and challenge existing social relations. (See David Roberts, “The Case for ‘Conditional Optimism’ on Climate Change,” Vox, December 30, 2018; Robert Pollin, “De-Growth vs. a Green New Deal,” New Left Review 112 [2018]).

Such views were subjected to a strong refutation by Enno Schröder and Servaas Storm in a November 2018 paper entitled “Economic Growth and Carbon Emissions: The Road to ‘Hothouse Earth’ Is Paved With Good Intentions” (working paper no. 84, Institute for New Economic Thinking, November 2018). Schröder and Storm indicate that the supposed empirical evidence for absolute decoupling is based on distorted and misleading assumptions, such as not taking full account of the effects of the offshoring of production on territorial-based, as opposed to consumption-based, carbon emissions of rich countries. Moreover, fracking of oil and gas, which has reduced coal production, and thus carbon emissions, in some countries, has nonetheless had the effect of leaking enormous quantities of methane, a more dangerous greenhouse gas. Once such considerations are accounted for, absolute decoupling can only be envisioned based on imaginary emissions reductions arising from epoch-making technological breakthroughs that do not exist and are not even on the horizon at present. The authors conclude that “the required degree and speed with which we have to decarbonize our economies and improve energy efficiency are quite difficult to imagine within the context of our present socioeconomic system. Hence, to bring about the ‘zero-carbon’ revolution, we first need a political revolution—in the absence of which we are doomed to end up in a ‘Hothouse Earth’.… It is high time that we do whatever it takes to stop the self-destruction of capitalism” associated with its “creative” destruction of people and the planet.

In the “Notes from the Editors” to the January issue, bottom paragraph, line 2, the title of Kevin Phillips’s 1993 book should be Boiling Point. In the second paragraph on the same page, “MR Essays Online” should read “Monthly Review Essays.”

Capitalism Has Failed—What Next?
The Criminal Dimension of Climate Change