Dear Reader, we make this and other articles available for free online to serve those unable to afford or access the print edition of Monthly Review. If you read the magazine online and can afford a print subscription, we hope you will consider purchasing one. Please visit the MR store for subscription options. Thank you very much. —Eds.
Review
by Andrew Glikson
(Mar 01, 2019)
Topics: Climate Change Ecology History Places: Global 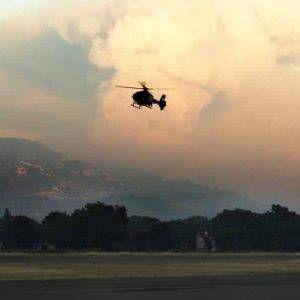 Andrew Glikson is an Earth and Paleoclimate scientist. He is a visiting fellow at the Research School of Earth Sciences at Australian National University, College of Science. This review is adapted from the one published in Media Monitors Network.

“We’re simply talking about the very life support system of this planet.”

—Joachim Schellnhuber, Director of the Potsdam Institute of Climate Impacts

The extreme rise in atmospheric carbon dioxide since the onset of the industrial age, reaching ~403 parts per million (ppm) in 2017, and the corresponding rise in mean global temperature to 1.3°C above preindustrial temperature, pose an existential risk for the future of civilization and nature.

Unprecedented Crime: Climate Science Denial and Game Changers for Survival, a book by Peter Carter and Elizabeth Woodworth, with a foreword by leading climate scientist James Hansen, outlines the criminality of those who actively promote the continuing emission of carbon gases into the atmosphere despite having full knowledge of the consequences. These consequences include the breakdown of large ice sheets, rising sea levels, and the intensification of extreme weather events around the world, such as hurricanes, floods, and fires.1

The book highlights the collusion of large parts of the mainstream media with climate change denial and its cover up, stating that

there is no benign explanation for a full media blackout of a significant global development that was heralded by the United Nations Secretary-General. This blackout goes far beyond ignorance or negligence. It is a willful obstruction of public knowledge of the extraordinary extent of global efforts to combat the greatest existential threat of all time by changing business-as-usual. We define this willful, methodical blocking of vital survival information as an unprecedented crime against life on the planet.

The book cites Tom Engelhardt, author of Terracide and the Terrarists: Destroying the Planet for Record Profits:

The fossil-fuel companies are guilty of the ultimate crime, because they are earning their profits directly off melting the planet, knowing that their extremely profitable acts are destroying the very habitat, the very temperature range that for so long made life comfortable for humanity.… However, Big Carbon could never have been able to continue its polluting ways—long after the scientific community had reached consensus about the connection between fossil-fuel emissions, global warming, and climate change—without the assistance of the media.2

burning all fossil fuels would create a different planet than the one that humanity knows. The paleoclimate record and ongoing climate change make it clear that the climate system would be pushed beyond tipping points, setting in motion irreversible changes, including ice sheet disintegration with a continually adjusting shoreline, extermination of a substantial fraction of species on the planet, and increasingly devastating regional climate extremes.3

Following the presentation of definitive evidence of anthropogenic climate change, a plethora of websites have emerged reporting the views of nonscientists as well as scientists known to receive funding from the fossil fuel industry. These views, in breach of the basic laws of physics and of direct observations, ignore peer-reviewed, published climate and paleoclimate science, misrepresent observed atmospheric and oceanic processes and trends, fabricate evidence, and conduct personal attacks against climate scientists.4

Examples of this abound:

Virulent attacks on climate scientists followed. To use one example from the book, a climate change denier “argued that the ‘demonization of carbon dioxide really differs little from the Nazi persecution of the Jews, the Soviet extermination of class enemies or ISIL slaughter of infidels.'”7

Large parts of the conservative press have taken strong exception to the evidence of anthropogenic global warming, as reported in Robert Manne’s essays “Diabolical” and “Bad News.”8

The manifest paralysis of the political and media classes in the face of the climate impasse, evidenced by the failure of a succession of United Nations Framework Conventions on Climate Change to undertake meaningful steps to reduce carbon-dioxide emissions—since 2009: Copenhagen, Cancún, Doha, Durban, Warsaw, Paris—requires alternative avenues to limit the deleterious consequences of continuing carbon emissions on the biosphere.9 These consequences have been reported by the Intergovernmental Panel on Climate Change Working Group II (Climate Change 2014: Impacts, Adaptation, and Vulnerability) and Working Group III (WGIII – Climate Change 2014: Mitigation of climate change).10

Traditionally, political and economic negotiations aim to compromise. Unfortunately, no negotiation is possible with the basic laws of physics and chemistry, or with processes in the atmosphere-ocean-cryosphere system.

Some of the consequences of the above include:

Since the onset of the industrial age and particularly since the Second World War, an abrupt rise in atmospheric temperature levels has been driven by an increase in the concentration of greenhouse gases due to the release of more than 600 billion metric tons of carbon (gigatons of carbon, or GtC) into the atmosphere. This is leading to a dramatic shift in the state of the atmosphere-ocean system, unprecedented in recorded geological history with the exception of events that led to mass extinctions, such as massive volcanism, extraterrestrial impacts, and large-scale releases of methane.

As a direct consequence of the above, mean global temperatures have risen by about 1.3°C and, had it not been for emitted sulfur, aerosol temperatures have risen by nearly 2.0°C, reaching levels similar to those of the Pliocene period roughly 2.6–5.3 million years ago. This shift is occurring at the fastest rate recorded by paleoclimate studies. Whereas many species can adapt to gradual environmental changes, the current temperature-rise rate, resulting from ~2–3 ppm carbon dioxide/year, cannot be sustained.15 The current change is manifested by an increase in the melting rate of the major ice sheets, the accelerating rise in sea levels, and the greater frequency and intensity of extreme weather events, reflecting elevated energy levels of the atmosphere-ocean system.16

Continuing carbon emissions and the consequent rise of mean global temperatures will render large parts of Earth’s land surfaces uninhabitable due to extreme temperatures, droughts, storms, and flooding of coastal deltas and lower river regions due to the rise in sea levels. The rise in sea levels is estimated to be about 25 ± 12 meters—Pliocene-like conditions—constituting an existential calamity for civilization and nature.17 Leaving aside the injection of transient, short-residence time sulfur aerosols, the arrest of current climate trends would require (1) a meaningful reduction in the current rate of carbon emissions (~9 GtC/year), and (2) the application of carbon dioxide drawdown technologies, such as large-scale sea grass farming, biochar, and carbon dioxide capture by air streaming through basalt and serpentine, aimed at reducing atmospheric greenhouse gases by at least 50 ppm. There are enough reserves of conventional and unconventional (oil shale, tar sands, coal seam gas) fossil fuels whose combustion would raise atmospheric and oceanic temperatures to the levels of the early Eocene and the Cretaceous periods, excluding most current forms of advanced life on Earth.

As Robert Manne writes: “Unless by some miracle almost every climate scientist is wrong, future generations will look upon ours with puzzlement and anger—as the people who might have prevented Earth from becoming a habitat unfriendly to humans and other species but nonetheless failed to act.… Our conscious destruction of a planet friendly to humans and other species is the most significant development in history.”18

The carbon-oxygen cycle of the atmosphere-ocean-land constitutes the lungs of the biosphere. Burning the vast carbon reserves buried in sediments can only result in a demise rivaling the five great mass extinctions in Earth’s history. Survivors of the sixth mass extinction may hold responsible those who promoted carbon emissions and turned a blind eye to the unfolding tragedy: the fossil fuel barons, the political classes, and their media mouthpieces.

View all posts by Andrew Glikson →