Dear Reader, we make this and other articles available for free online to serve those unable to afford or access the print edition of Monthly Review. If you read the magazine online and can afford a print subscription, we hope you will consider purchasing one. Please visit the MR store for subscription options. Thank you very much. —Eds.
Notes from the Editors
by The Editors
(Oct 01, 2019)
Topics: Capitalism Economic Crisis Political Economy Places: Americas United States 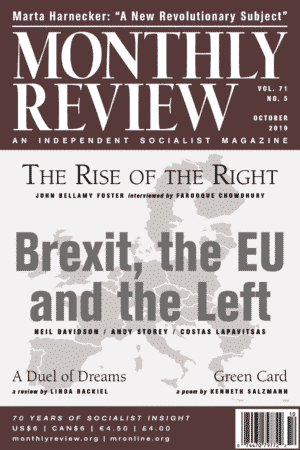 If there is one thing that is clear about the economic situation in the mature capitalist economies, as we write these notes in mid–August 2019, it is that the financial world is increasingly running scared and looking for safe havens, worrying about the storm clouds ahead. There is now little doubt that the world economy is on the verge of a recession after a long sluggish recovery from the Great Financial Crisis of 2007–09. In itself this should not give occasion to surprise. The business cycle is inherent to the capital accumulation process as a whole; recoveries are followed by downturns and recessions. In this instance, however, there lurks a bigger fear, the possibility of a financial Armageddon on the level of the Great Financial Crisis of 2008—or worse.

On August 14, the yield curves on U.S. government-issued bonds inverted (with the yield on a ten-year Treasury falling below that of a two-year note)—in what is widely viewed in the markets as a negative omen. This represents a much-watched indicator that has preceded every U.S. recession since the mid–1950s (“U.S., U.K. Bond Yields Invert, Flashing Economic Warning,” U.S. News, August 14, 2019). Normally, long-term bonds have higher yields than short-term bonds, with an inversion of this sort indicating that investors are nervous and running for shelter. There is the added complication at present, though, of almost $17 trillion dollars in government-issued and corporate debt, primarily in Europe, with negative yields. Increased demand for long-term bonds issued by states and large corporations, viewed as a safe harbor in the coming storm, is forcing up their prices and driving yields down to the subzero realm. As Andre Severino, head of global fixed income at Nikko Asset Management, declared in August, the proliferation of negative-yield bonds is ominous. “It’s kind of like Armageddon is being priced in” (“Investors Ponder Negative Bond Yields in the U.S.,” Wall Street Journal, August 11, 2019).

The overall economic context is one of vast amounts of free cash (standing for the quantity of “cash”—profits after taxes plus depreciation—left over after investment) floating around in the market, which is a product of the entire structure of monopoly-finance capital, plus a long period of quantitative easing, cheap money, and falling taxes. Corporate tax rates in the developed world have dropped 16 percentage points since 1990. At the root of all of this is stagnant investment and a corresponding growth of financial speculation (V. Anantha Nageswaran, “Why It’s Feeling Like Autumn of 2008,” Livemint, August 18, 2019). These are classic conditions of the overaccumulation of capital.

Wait, it gets worse. A hyperspeculative binge on Wall Street has been directed at the stocks of companies, such as Tesla, Uber, WeWork, and other firms with nonexistent profits and no prospect of profit in the foreseeable future, but that promise future monopoly positions within some market segment and are therefore experiencing huge speculative increases in stock valuations. Amazon, the model case for this phenomenon, made less than $8 billion in profits between 1998 and 2018, while Apple in the same period recorded $327 billion in profits (“No Profit? No Problem,” CNBC Business News, August 29, 2018; Nageswaran, “Why It’s Feeling Like Autumn of 2008”; “David Einhorn: Value Investing May Be Dead and Amazon and Tesla Killed It,” CNBC, October 24, 2017). And yet it is Amazon that is growing faster (“Amazon Is Growing Faster Than Any Big Company in the U.S. These Days—and Maybe Ever,” Star Tribune, October 23, 2017).

This phenomenon of growth in asset valuations largely decoupled from profit has created a house of cards. In the United States, the share of “small cap” firms (nonfinancial companies with capitalization of $300 million to $2 billion) that are exhibiting increasing risk of looming financial distress—with a negative Ebitda (earnings before interest, tax, depreciation, and amortization) or with net debt that is three times their Ebitda—is 53 percent as of June 2019, compared to only 32 percent in June 2007 (Eric Cinnamond, “Friends in Leveraged Places,” PalmValleyCapital, July 17, 2019; Nageswaran, “Why It’s Feeling Like Autumn of 2008”).

It is thus not just a matter of bond yields becoming inverted, but also a parallel problem of the inversion of equity investment, since the firms that generate profits seek no new (net) investment, with the result that the surplus flows instead to firms that have no reasonable prospects of profitability but promise speculative gains from increases in asset prices. This leads, as economist Craig Medlen states in his magisterial Free Cash, Capital Accumulation and Inequality (2019), to “a bubbly economy subject to blowups such as those in 1987, 1991, 2001 and 2008” (142).

Meanwhile, a trade war initiated by the Donald Trump administration is further destabilizing the world economy. China is experiencing its slowest growth in almost three decades, though still growing far in advance of all other major economies. Multinational corporations are now moving their supply chains out of China (but not back to the United States) in order to avoid 25 percent tariffs on their goods (Nageswaran, “Why It’s Feeling Like Autumn of 2008”; “Tariffs Drive Companies Out of China,” Wall Street Journal, July 15, 2019). Central banks are driving down interest rates in order to depreciate their currencies so as to promote exports. Mohamed El-Erian, chief economic adviser for Munich-based Allianz, has called this “a race to the bottom for global interest rates.” Under these conditions, the world economy is now seeing the rapid growth of what are called “zombie firms,” companies that would fail if the costs of debt were at more normal levels (“Banks Are Paying People to Borrow Money,” Washington Post, August 14, 2019).

None of this hyperfinancial activity has served to lift nations out of the underlying conditions of stagnation that have beset monopoly-finance capital. Rather, it has only worsened what John Bellamy Foster and Fred Magdoff in The Great Financial Crisis (and later Foster and Robert W. McChesney in The Endless Crisis) called the stagnation-financialization trap. Stagnation (slow growth, investment atrophy, underutilization of productive capacity, and a secular rise in underemployment) has led to an increasingly financialized economy relying on debt-leveraged assets to absorb the accumulating surplus that cannot find profitable productive investment. This leads, however, to more severe financial crises that only serve to deepen stagnation, for which the only answer offered by the system is further financialization.

At the level of production, growth rates in the advanced capitalist economies continue to slow down. In the United States, “the year-over-year change in nonresidential fixed investment” in the past few years, despite a brief flurry of economic activity following the Trump tax cuts, seems to be “falling off a cliff” (“It’s Not Trickling Down,” Economic Policy Institute, July, 29, 2014). Given stagnation, inequality is rising rapidly as capital seeks a larger share of a slowly growing pie. Over the last forty years, CEO income has grown by 940 percent compared to 12 percent for typical employees over the same period (“CEO Compensation Has Grown by 940% Since 1978,” Economic Policy Institute, August 14, 2019). The Forbes four hundred richest Americans now own nearly as much wealth as the bottom two-thirds of the U.S. population (“The 3 Richest Americans Hold More Wealth than Bottom 50% of the Country, Study Finds,” Forbes, November 9, 2017). The labor share of income in the United States has dropped about 13 percent since 2001 (David Ruccio, “Time Is Running Out,” Occasional Links and Commentary, August 13, 2019). Household debt is at an all-time high. Bankruptcy filings are rising. Around forty million people in the United States are struggling with hunger. Wages remain relatively stagnant while labor underutilization rates (including those who have dropped out of the labor force and the long-term unemployed) remain relatively high for the peak of the business cycle (“Charting the Labor Market,” U.S. Bureau of Labor Statistics, August 2, 2019). Average life expectancy in the United States in the last few years has gone down rather than up (“U.S. Life Expectancy Drops for Third Year in a Row,” Smithsonian, December 3, 2018).

It does not take much thought or imagination, given these circumstances, to conclude that the next downturn will likely have enormous consequences. And while the corporate rich came out mostly unscathed from the 2007–09 crisis, exporting the crisis to others, the memories are still fresh. At that point, all bets will be off and a space may well open up for fundamental social change. Such a transformation is necessary for a host of noneconomic reasons as well; not least of all capitalism’s destruction of the entire planet as a place of human habitation.

We mention with sadness the death of our longtime friend and colleague, Hyacinth Anthonyson, on August 6 at age 86. For more than twenty years, beginning in the mid–1980s, Hyacinth handled book orders and permission requests for Monthly Review Press. She was a reliable, steady, and cheerful presence, whose deep respect and affection for Monthly Review extended well past her retirement some ten years ago. We remember her fondly and we will miss her.

Ann Snitow, coeditor with Christine Stansell and Sharon Thompson of the Monthly Review Press book Powers of Desire: The Politics of Sexuality (1983), died on August 10 at age 76. She was a leading feminist writer, activist, and scholar from 1969 until her death. She is perhaps best-known today for her book The Feminism of Uncertainty (2015), which brought together a series of her essays exploring the everchanging struggles of the feminist movement. Powers of Desire was conceived as a response to a major split within left feminism in the early 1980s as a result of the growth of the feminist antipornography movement of the day. In their introduction, Snitow, Stansell, and Thompson took a long historical view and recognized the forms of sexual oppression and misogyny that had given rise to the antipornography movement, but nevertheless came out in favor of “affirming women’s sexual expression,” something that was evident in every essay in the book. Powers of Desire, like all of Snitow’s work, thus stands as a courageous book, not only by the standards of the early 1980s, but also by those of the present day.

As this issue was going to press, we learned of the passing of longtime Monthly Review and Monthly Review Press author and friend Immanuel Wallerstein. He died on August 31 at age 88. We will discuss and honor his life and work in a future issue of the magazine.

The Rise of the Right
Race and Mystery in Cape Cod