Dear Reader, we make this and other articles available for free online to serve those unable to afford or access the print edition of Monthly Review. If you read the magazine online and can afford a print subscription, we hope you will consider purchasing one. Please visit the MR store for subscription options. Thank you very much. —Eds.
Notes from the Editors
by The Editors
(Feb 01, 2020)
Topics: Capitalism Economic Theory Inequality Political Economy Places: Americas United States 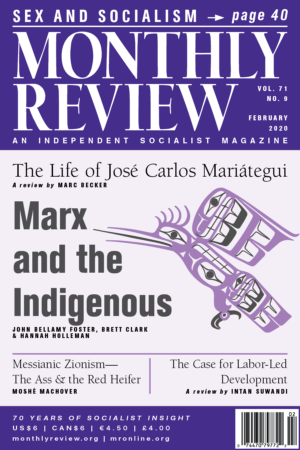 Economists generally expect wages to rise significantly at the peak of the business cycle. The fact that this is not happening today is seen as something of a paradox. According to the U.S. Bureau of Labor Statistics, the U.S. economy is experiencing an unemployment rate that is currently (December 2019) at a fifty-year low. Yet, wage growth continues to be weak, with continuing wage stagnation even at the peak of the business cycle. Adjusted for inflation, wage rates rose only 1.1 percent in November 2019 from the previous November (Bureau of Labor Statistics, “Real Earnings-November 2019,” News Release, December 11, 2019). One explanation for the continuing wage stagnation is that the employment-to-population ratio remains historically low, having partially recovered but currently standing at 80.3 percent, where it was in 2007, at the brink of the last recession when similar issues were being raised (“Participation by Prime-Age Workers Hits 10-Year High,” Wall Street Journal, November 1, 2019; Federal Reserve Board of St. Louis, Employment-Population Ratio, November 2019). Another factor is the drop in the rate of private-sector unionization in the United States, which has fallen to 6.4 percent (Bureau of Labor Statistics, “Union Members Summary,” Economic News Release, January 18, 2019). Additionally, corporate outsourcing of production to the Global South (facilitated by the North American Free Trade Agreement and other similar trade deals) has had the effect of pulling down U.S. wages as part of a global race to the bottom.

However, a major and largely undertheorized reason for the sluggish wages in a period of seeming full employment is to be found in the fact that the new jobs being created by the economy do not measure up to those of the past in terms of weekly wages and hours, or in the degree to which they support households or even individuals. In the language of workers, they are “bullshit jobs, not real jobs.”

In November 2019, Cornell Law School, in collaboration with the Coalition for a Prosperous America, the University of Missouri-Kansas City, and the Global Institute for Sustainable Prosperity, introduced the U.S. Private Sector Job Quality Index (available at http://jobqualityindex.com), with monthly data, derived from the Current Employment Survey, extending from 1990 to the present, and with plans to update the series each month. The new Job Quality Index (JQI) examines the percentage of the private-sector jobs of production and nonsupervisory workers (82 percent of all private-sector workers) that are high-quality jobs compared with low-quality jobs. Job quality is measured by weekly wages (weekly hours of employment multiplied by hourly wages), with high-quality jobs associated with weekly wages that are above the mean for full-time workers and low-quality jobs associated with weekly wages that are below the mean. A JQI ratio of less than 100 means that the ratio is skewed toward low-quality jobs. In 1990, the JQI level was 94.9 percent. By July 2019, it had dropped to 79 percent. Low-wage/low-hour jobs constituted 52.7 percent of all jobs of production and nonsupervisory workers in 1990, while in the last three decades 63 percent of all new production and nonsupervisory jobs have had low wages/low hours. In short, jobs are becoming more and more precarious, a category that Karl Marx utilized to define those employed workers who were part of the “stagnant” section of the reserve army of labor or relative surplus population, characterized by low and static wages, low hours, and unregulated, unstable working conditions (Karl Marx, Capital, vol. 1 [Penguin, 1976], 796–98). According to Forbes, more than a third (36 percent) of U.S. workers are part of the gig economy, amounting to some 57 million people (TJ McCue, “57 Million Workers Are Part of the Gig Economy,” Forbes, August 31, 2018). Forty percent of hourly paid workers in the United States between the ages of 26 and 32 do not know their work schedules a week in advance (Richard V. Reeves, “Capitalism Is Failing. People Want a Job with a Decent Wage. Why Is that So Hard?,” Guardian, April 24, 2019).

The November 2019 JQI study indicates the gap between the weekly wages of production and nonsupervisory workers above and below the mean has increased almost fourfold on an inflation-adjusted basis over the last three decades. The biggest reason for this growing gap between high-quality and low-quality jobs, however, is not the hourly wage increases associated with high-quality jobs (which grew about 10 percent faster, adjusted for inflation, than that of low-quality jobs over the period), but rather the discrepancy in the actual hours worked associated with high-quality versus low-quality jobs. The average hours worked in high-quality jobs have remained essentially flat at 38.3 hours per week, dropping only twenty-four minutes since 1997. In contrast, low-quality jobs as a group have seen a net reduction in hours worked per week by a full hour since 1999 alone, and now average about thirty hours a week. The shorter hours of low-quality jobs are to a considerable extent the result of the efforts by employers to avoid mandated benefit thresholds, with the result that most of these jobs are also without benefits. Needless to say, such precarious employment makes it much more difficult for workers to unionize.

The wider implications of all this in terms of the real slack in the labor market or “effective underemployment” are enormous. As the authors of the JQI report declare, “if the average P&NS [production and nonsupervisory] worker in a low-quality job were working for the same number of average hours as those in high-quality jobs, that [alone] would translate into the unutilized worker/hour equivalent of a whopping 12.6 million jobs.” This suggests that the actual U.S. reserve army of labor in terms of working hours lost is far beyond what is indicated by the usual data on unemployment and underemployment. With the diminishing share of high-quality jobs and the rapid growth in the skew toward low-quality jobs, more and more workers are faced with financial disincentives to working (with its added intended costs) and are forced to fall back on family members, take early Social Security, and so on. Given the oppressive structure of U.S. society, the highest ratios of workers employed in low-quality jobs are to be found among African-American, Latinx, immigrant, and women workers.

A related November 2019 study by the Brookings Institution indicates that 44 percent of all prime-age workers between the ages of 18 and 64 are low-income workers, defined as those who earn less than two-thirds of the median wage for full-time male workers, adjusted for the regional cost of living. Low-income workers currently have an average hourly wage of $10.22 and average annual earnings of $18,000 (Martha Ross and Nicole Bateman, “Low-Wage Work Is More Pervasive than You Think, and There Aren’t Enough Good Jobs to Go Around,” Brookings, November 21, 2019; Reade Pickert, “For 53 Million Americans in Low-Wage Jobs, a Difficult Road Out,” Bloomberg, November 17, 2019). Thirty percent of low-wage workers (16 million people) have earnings below 150 percent of the poverty line. The localities with shares of low-wage workers that are 46 percent or more of all workers are concentrated primarily in the West and the South. Yet, they exist in sizable proportions in all regions. There are nearly a million low-wage workers in the Washington DC area, 700,000 in both Boston and San Francisco, and 560,000 in Seattle. Most of these workers live and work under extremely precarious conditions. These dire conditions lie behind the decline in life expectancy of the U.S. population, much of it attributed to growing suicides and the opioid crisis (Julia Haskins, “Suicide, Opioids, Tied to Ongoing Fall in US Life Expectancy,” Nation’s Health, February/March 2019).

The JQI report indicates that the trend toward low-quality jobs reflects a “relative devaluation of U.S. domestic labor,” constituting a higher rate of exploitation of U.S. workers, through forced reductions in the historically determined value of labor power. Not only are wages and hours low, but many workers, such as those employed in expanding goods-shipping warehouses, are subjected to relentless speedups and evermore sophisticated monitoring systems.

The rapid degradation of the conditions of U.S. workers can be seen when comparisons are made with other advanced capitalist economies. A 2017 study by economists Thomas Piketty, Emmanuel Saez, and Gabriel Zucman indicates that, “while the bottom 50 percent of incomes were 11 percent lower in France than in the US in 1980, they are now 16 percent higher” (“Economic Growth in the US: A Tale of Two Countries,” Vox, March 29, 2017). In fact: “The bottom 50 percent of income earners make more in France than in the US even though average income per adult is still 35 percent lower in France than in the US.… Since the welfare state is more generous in France, the gap between the bottom 50 percent of income earners in France and the US would be even greater after taxes and transfers.” Similarly, Canadian workers are significantly better off than their U.S. counterparts up through the 56th percentile, that is, encompassing most of the Canadian working class (See Martin Hart-Landsberg, “The Harsh Reality of Job Growth in America,” Reports from the Economic Front, December 17, 2019).

Of course, the liberal think tanks who present such data, though well intentioned, are limited by capitalist ideology. They typically end their studies with empty conclusions, since any real solution to the trend toward devaluation of U.S. workers—specifically, “putting the economy in the hands of the workers that create the wealth, while ensuring that everyone who wants work, has it”—requires going against the “Lords of Capital” (Glen Ford, “‘Booming’ Economy Means More Bad Jobs and Faster Race to the Bottom,” Black Agenda Report, December 5, 2019).

One thing is certain from the foregoing discussion. The U.S. economy is still far from full employment. In this regard, we highly recommend the Jobs for All Manifesto published on MR Online in November 2019.

Marx and the Indigenous
Another Gray Afternoon in Guernica