Dear Reader, we make this and other articles available for free online to serve those unable to afford or access the print edition of Monthly Review. If you read the magazine online and can afford a print subscription, we hope you will consider purchasing one. Please visit the MR store for subscription options. Thank you very much. —Eds.
Notes from the Editors
by The Editors
(Mar 01, 2020)
Topics: Capitalism Inequality Political Economy Places: Americas United States 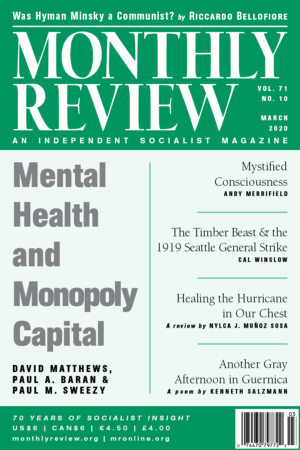 Capitalism, with its history of alienation, exploitation, racism, patriarchy, and homophobia, along with its attempted commodification of everything in existence, has long robbed tens of millions of people in the United States of their mental (as well as physical) well-being. Today, the combination of three straight years of declining life expectancy, attributable to what are called “deaths of despair” associated with suicides, drug use, and alcoholism, has pointed to the full depths of the worsening structural crisis in U.S. mental health. It is therefore appropriate that three of the articles in this issue of Monthly Review—Andy Merrifield’s “Mystified Consciousness,” David Matthews’s “A Theory of Mental Health and Monopoly Capitalism,” and Paul A. Baran and Paul M. Sweezy’s “The Quality of Monopoly Capitalist Society: Mental Health” (a previously unpublished part of Monopoly Capital)—are devoted to questions of unhappy consciousness and mental illness.

According to an article in Bloomberg Businessweek (Cynthia Koons, “Latest Suicide Data Show the Depth of U.S. Mental Health Crisis,” June 20, 2019), the United States is currently in the midst of a “national mental health epidemic.” Homes and families are in dissolution due to effects of “stagnant wages; rising health care costs; the proliferation of highly addictive opioids after a marketing push from major drug companies; the disappearance of well-paid blue-collar jobs and emergence of the gig economy; [and] the lack or limited availability of treatment and services. The destructive power of technology, be it in the form of social isolation or cyberbullying, have been cited in the rising number of teens killing themselves. Suicide is the second-leading cause of death for 10-to-34-year-olds.” According to official health statistics, 20 percent of the U.S. population were estimated to be subject to mental illness in 2018 (U.S. Department of Health and Human Services, Key Substance Use and Mental Health Indicators in the United States: Results of the Survey of Drug Use and Health, August 2019).

As economist Angus Deaton of Princeton University—winner of the Bank of Sweden’s Prize in Economic Sciences in Memory of Alfred Nobel and author, together with Anne Case, of Deaths of Despair and the Future of Capitalism (Princeton University Press, 2020)—stated in May 2019,

Capitalism is not delivering to large fractions of the population; in the US, where the inequalities are clearest, real wages for men without a four-year college degree have fallen for half a century, even at a time when per capita GDP has robustly risen. Mortality rates are rising for the less-educated group at ages 25 through 64, and by enough that life expectancy for the entire population has fallen for three years in a row, the first time such a reversal has happened since the end of the first world war and the great influenza epidemic. Less educated [working-class] Americans are dying by their own hands, from suicide, from alcoholic liver disease, and from overdoses of drugs. Morbidity is rising too, and they are also suffering from an epidemic of chronic pain that, for many, makes a misery of daily life.…

In the face of globalization and innovation, many of us would argue that American policy, instead of cushioning working people, has instead contributed to making their lives worse, by allowing more rent-seeking, reducing the share of labor, undermining pay and working conditions, and changing the legal framework in ways that favor business over workers. Inequality has risen not only due to wealth generation from innovation or creation, but also through upward transfers from workers. It is not inequality itself that is hurting people, but the mechanisms of enrichment. (Angus Deaton, “Inequality and the Future of Capitalism,” IFS Deaton Review, May 14, 2019)

It should be noted, parenthetically, that much of the attention currently being given to deaths of despair in the working-class population is due to the fact that white workers are now experiencing some of the hopelessness and marginalization that African-African and Native-American communities have long felt, reflected in a sharp rise in mortality rates among whites with only a high school education or less, on a scale sufficient to register a decline in overall U.S. life expectancy. Nevertheless, this should not be allowed to overshadow the fact that, “despite the rise in mortality among middle-aged whites, the rates among middle-aged African Americans and American Indians remain substantially higher” (Keith P. Gennuso et al., “Deaths of Despair(ity) in Early 21st Century America: The Rise of Mortality and Racial/Ethnic Disparities,” American Journal of Preventive Medicine 57, no. 5 [2019]: 586).

Deaton sees deaths of despair in the working-class population as a result of the of growing class inequality and rapacious rent-seeking of “democratic capitalism.” His solution is a “social democratic capitalism” that would reduce inequality and provide greater welfare provisions. Such reformist views, however, fail to appreciate the full extent to which what Erich Fromm called “a pathology of normalcy” is endemic to monopoly capitalism. (Fromm’s notion of the pathology of normalcy was first introduced in print in his 1955 book The Sane Society, which influenced Baran and Sweezy, and elaborated in his posthumously published lecture series The Pathology of Normalcy.) Fromm’s model has been taken up and further developed in recent years by cultural psychologist and Monthly Review Press author Carl Ratner (see Ratner, “Overcoming Pathological Normalcy,” in Health Care Under the Knife, ed. Howard Waitzkin [Monthly Review Press, 2018], 211–23, and Ratner, “Pathological Normalcy: A Construct for Comprehending and Overcoming Psychological Aspects of Alienation,” The Humanistic Psychologist 42 [2014]: 298–303).

Whereas the dominant approach to psychiatric epidemiology sees normal and abnormal mental health as discrete entities, the pathology of normalcy approach sees societies, and particularly capitalism, as promoting conditions that have a cumulative negative impact on mental health, associated with such social phenomena as extreme competition, alienation, inequality, precariousness, violence, militarism, injustice, imprisonment, work stress, chronic joblessness, disability, environmental destruction, lack of education, institutionalized racism, patriarchy, misogyny, homelessness, and so on—constituting the socioeconomic and cultural background in which abnormal pathology develops. There is thus a continuum between the various stressors imposed by a socially induced pathological normalcy, constituting a sick society, and the advent of abnormal pathology in individuals. In these terms, the number of people who are genuinely psychologically healthy, through achieving relative separation from the dominant structure of pathological normalcy, is relatively small. Ratner concludes: “The construct of pathological normalcy calls for a revolutionary praxis aiming to eradicate it. The path beyond capitalism…involves a conscious struggle to replace pathological normalcy with a post-capitalist normalcy where social conditions foster mental health rather than undermine it” (Ratner, “Overcoming Pathological Normalcy,” 223).

The decision by a majority of a three-judge panel of the Ninth Circuit Court of Appeals on January 2020 to dismiss Juliana v. United States, known as the children’s trust case on climate change, may turn out to be a historical marker of the complete failure of the capitalist state to address the climate crisis. The children’s trust case, with its twenty-one plaintiffs between the ages of 12 and 23, asserts that the federal government through its affirmative actions in promoting fossil fuels in the face of knowledge of climate change has willfully deprived them of their most fundamental U.S. constitutional rights to life, liberty, and property and has failed to protect essential public natural resources. The court in its opinion primarily accepted the plaintiff’s factual claims that the federal government was actively and consciously contributing to climate change and injuring the plaintiffs in violation of the constitution. Nevertheless, two of the three judges dismissed the case on the grounds that the judicial system could not provide a remedy, which it left to the discretion of the Congress, the President, and the electorate at large. The plaintiffs intend to ask the full Ninth Circuit Court to hear the case on the issue of redressability (“Decision of Divided Ninth Circuit Court of Appeals Finds Primarily for Juliana Plaintiffs, but Holds Federal Judiciary Can Do Nothing to Stop the U.S. Government in Causing Climate Change and Harming Children,” Our Children’s Trust, January 7, 2020). Still, the action of the majority of the Ninth Circuit panel, in deciding in January to dismiss the case, can only underscore the fact that the state in capitalist society has failed over and over to take those actions necessary to prevent the irreversible destruction of the planet as a place of human habitation, threatening the chain of human generations. In these circumstances it is clear that more drastic and radical solutions must therefore be sought, going against the logic of the capital system, and even seeking to transcend it. Given the brief window in which the world is still able to act, if it is to prevent climate crisis from spinning out of control, the answers before us must necessarily be revolutionary ones.

Hyman Minsky at 100: Was Minsky a Communist?
Health Care for Profit (Not Health)