Dear Reader, we make this and other articles available for free online to serve those unable to afford or access the print edition of Monthly Review. If you read the magazine online and can afford a print subscription, we hope you will consider purchasing one. Please visit the MR store for subscription options. Thank you very much. —Eds.
by Paul M. Sweezy
(Jul 01, 2020)
Topics: Capitalism Inequality Marxism Political Economy Race Places: Global 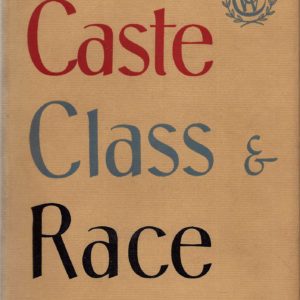 American academic social science has a long and inglorious tradition of evading the burning social issues of the day. The powers-that-be hold the purse strings and on occasion crack the whip; the social scientists, bowing respectfully, either elaborate justifications of the existing social order or else escape into the innocuous study of other times and other systems.

But there have always been a few who have insisted on dealing with the crucial issues of their times and on telling the truth as they see it, regardless of whose toes may be stepped on or whose sensibilities may be injured. They have prevented the complete stultification of academic social science and in the long run have exercised an influence on American life out of all proportion to their numbers.

Such a one is Oliver Cromwell Cox, a professor of sociology, formerly at Tuskegee Institute, now at Lincoln University in Missouri. Oliver Cox’s book, Caste, Class, and Race…is unquestionably an outstanding product of American sociology. And yet packed away in its long words and copious footnotes there is plenty of dynamite—and no pulled punches.

It has been my experience that very few people, even among social scientists, have heard of Cox’s work. This is perhaps not surprising. Caste, Class, and Race is the kind of book publishers bury as quickly as they can; while the sociologists, unable to answer it, seem to have found it most expedient to ignore it. Nevertheless, its message is of vital importance, not only to scholars and students but to the whole American progressive movement.

If I were rewriting the review today, I would not have to change much. The original publisher (Doubleday) did bury the book, allowing it to go out of print when the first printing was sold out hardly more than a year after it was published (it was reprinted in 1959 by Monthly Review Press and has been kept in print ever since). Many more people of course know about and appreciate Cox’s work than did so thirty-five years ago, but it is still ignored by most of his professional colleagues. As far as what I wrote then about Cox himself and the substance of the book, I would not change a word.

During the last twenty-five years of his life (he died in 1974), the center of Cox’s attention shifted from race relations in the contemporary world to the origins and development of capitalism. He published three major works in this hitherto much neglected field: The Foundations of Capitalism (1959), Capitalism and American Leadership (1962), and Capitalism as a System (1964). These studies display the same careful and broad-ranging scholarship and the same qualities of original and critical thought as Caste, Class, and Race. However, they deal with a set of problems that spread-eagle all the social sciences and hence lay outside both the interest and the competence of American sociologists of that period. It is hardly surprising, therefore, that this whole aspect of Cox’s work went almost entirely unnoticed at the time of publication and for the most part has still to be discovered by a later generation of sociologists, many of whom are no longer confined within the narrow limits of an artificially restricted (and impoverished) “discipline.” Particularly noteworthy is the fact that after Cox’s death, a whole new branch of historical sociology, generally known as world-systems theory, opened up and rapidly grew in the Americas, under the leadership of such eminent scholars as Immanuel Wallerstein, Andre Gunder Frank, and Samir Amin. Both chronologically and logically, Oliver Cox deserves to be considered not only a forerunner but a founding father of this relatively new and welcome departure in American sociology. I hope and trust that the publication of this selection from his major works, carefully chosen and helpfully introduced by Herbert Hunter and Sameer Abraham, will go far toward achieving this result.

One factor in evaluating the importance of thinkers and scholars is of course the prestige accorded them by their peers. In the case of Oliver Cox, however, this criterion is manifestly inapplicable. In Cold War America, the time and place in which he did his work, his peers—or those who ought to have been his peers—either knew nothing about him, did not understand him, or rejected his work on irrelevant ideological grounds. I think this is changing and will change even more in the future, but in the meantime we must judge him by other criteria.

For my part, I prefer what some may think too subjective a yardstick, i.e., the influence he has had on my own intellectual development. And by this standard I can only rank Oliver Cox as one of a small group of great American social scientists. On race relations, I am quite simply his pupil. Before Caste, Class, and Race, I had never really thought about the theoretical issues involved. I found his refutation of caste theory, so popular in the United States at the time, totally persuasive; and his linking of capitalist exploitation and modern race relations provided the necessary historical perspective. On the origins and development of capitalism, subjects on which I had discussions and occasionally disagreements with him during his lifetime—the differences related to the relative importance of commercial and capital-led labor relations in the early period—I have come more and more to appreciate and make use of his contributions in my own work. This holds especially of what I now consider to be the extraordinary importance of his analysis of the role of medieval Venice and a few other Italian city-states in creating and shaping the bourgeois institutions and mentality, without which capitalism would have been very different from what it has been during its period of world dominance.

In conclusion, one question to which Hunter and Abraham rightly devote attention in their introduction: Was Oliver Cox a Marxist? There is no right or wrong answer. Once again, I can only give my own: Yes, he certainly was a Marxist. He made no effort to minimize or disguise his intellectual debt to Marx. He thought like a Marxist. The revolutionary conclusions to which his work led, even if not always explicitly spelled out, were basically the same as Marx’s. This last point for me is the decisive one. If I had my way, I would deny the honorific title of Marxist to anyone who denies or repudiates the rock-bottom revolutionary content of Marx’s thought. By this standard, Oliver Cox clearly qualifies as a Marxist. If he often felt it necessary to deny that he was a Marxist, this was because what most American social scientists, not to mention the public at large, understood by Marxism was (and unfortunately still remains) a vicious caricature of the real thing.