Dear Reader, we make this and other articles available for free online to serve those unable to afford or access the print edition of Monthly Review. If you read the magazine online and can afford a print subscription, we hope you will consider purchasing one. Please visit the MR store for subscription options. Thank you very much. —Eds.
Poetry
by Raymond Nat Turner
(Feb 01, 2022)
Topics: Capitalism Labor Movements Political Economy Places: Americas United States 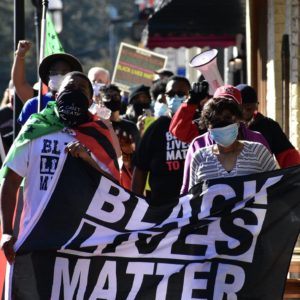 ”When someone shows you who they are, believe them the first time.”

“Nothing will fundamentally change…”

Is The Orange Age a blip on capitalism’s
continuum—scant four years of blitzkrieg—
like the thousand year Third Reich
that smoldered in ruin after twelve?
Or, is it the Civil War—looped—and playing
out in theaters near you? What’s Goin’ On?

Ask Ol’ Schmo—he might know—
he cut his teeth at the feet of crackers with
confederate cred—Dangling on the dicks of Dixiecrats
putting pubic hair on a Coke can above The People:
Gifting us Bassackwards Tribesman Thom-
ass Clarence—aka Long Dong Silver—for life…

Ask Ol’ Schmo—he might know—
what made the post-election angry old
boxer in him sing Dem Negroz the riot act:
“You must understand that the back of my
Hand will make your face react—upon impact—
Ohh, what’s Black got to do with it?
What’s Black but a second hand emotion?
Think bigger—think Pentagon devotion!!”

Ask Ol’ Schmo—he might know—
how the long-game’s played—Months of “Mike
and Ike—Good Cop-Bad Cop—” with Senators
Bonnie and Clyde—While “his hands are tied—”
Nothing can be done—the Votes aren’t there…
for the hardhat, lunch bucket,
PPE, “essential worker” crowd. Remember the
Ones lauded to the skies, serenaded by pots and pans?