Dear Reader, we make this and other articles available for free online to serve those unable to afford or access the print edition of Monthly Review. If you read the magazine online and can afford a print subscription, we hope you will consider purchasing one. Please visit the MR store for subscription options. Thank you very much. —Eds.
Notes from the Editors
by The Editors
(Feb 01, 2022)
Topics: Health History Imperialism Inequality Places: Americas Cuba Global United States 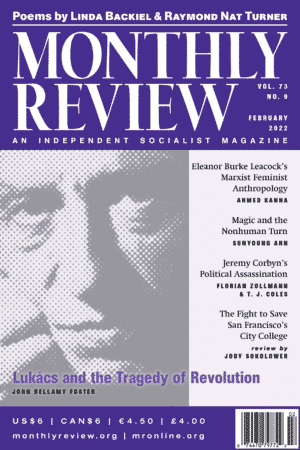 As we write these notes in late December 2021, the COVID-19 pandemic shows no signs of going away, with a new wave of SARS-CoV-2 now occurring in the form of the more readily transmittable Omicron variant. In these circumstances, the issue of vaccine imperialism, dividing the Global North and the Global South, has taken on new significance. At present, a majority of the adult population in the world has received at least one dose of a vaccine. Two-thirds of the population in the rich countries are fully vaccinated, while only 8 percent of those in the world’s low-income countries have received at least a single dose. Much of this discrepancy has to do with the global monopolies of Big Pharma corporations located in the rich capitalist countries at the center of the system, which are interested, before and beyond all else, in profit and accumulation. As of early fall 2021, Pfizer/BioNTech had reserved 98 percent of its total deliveries of the vaccine for high- and middle-income countries, as compared to 88 and 79 percent, respectively, in the cases of Moderna and Johnson and Johnson (“Coronavirus (COVID-19) Vaccinations,” Our World in Data, December 17, 2021; “Vax the World,” Science, November 26, 2021; A Double Dose of Inequality [London: Amnesty International, 2021]).

Pfizer, Moderna, and Johnson and Johnson alone are projected to receive over $130 billion in revenue in 2021 and 2022 from vaccine sales. In the cases of mRNA COVID-19 vaccine makers Moderna and Pfizer, their research and development costs for their vaccines were effectively zero, as they received government subsidies of $8.3 billion. The Moderna vaccine was in fact invented jointly by the U.S. government’s National Institutes of Health, with government scientists playing the critical role in developing the mRNA vaccine “recipe,” which they turned over to Moderna for manufacturing. Nevertheless, the price of a single dose of these mRNA vaccines was marked up between five and ten times the cost of production, depending on the market, with the result that these companies are receiving gargantuan monopoly profits, while the vaccine is priced out of reach of most people in low-income countries. The rich capitalist countries with their Big Pharma monopolies have refused to waive international property rights on their COVID-19 vaccines, which would allow them to be mass produced globally. Pfizer meanwhile has been demanding, as a condition of providing the vaccine, that countries in the Global South change their national laws to free vaccine makers from potential lawsuits, with countries from Lebanon to the Philippines forced to comply (A Double Dose; Eric Toussaint, “The Coronavirus Pandemic Has Widened the Gap Between the Global North and the Global South,” Committee for the Abolition of Illegitimate Debt, December 14, 2021; “Vaccine Monopolies Make Cost of Vaccinating the World Against COVID-19 5 Times More Expensive than It Could Be,” Oxfam International, July 29, 2021; “Moderna Offers NIH Co-Ownership to COVID Vaccine Patent Amid Dispute with Government,” CNBC News, November 15, 2021; Lawrence Wright, “The Plague Year,” New Yorker, January 4 and 11, 2021; “The Inside Story of the Pfizer Vaccine,” Financial Times, November 29, 2021).

The main reason the distribution of COVID-19 vaccines globally is not more severe, given the vaccine imperialism of the Global North, is due to the quite different role of China, which has emphasized South-South solidarity. As of late December 2021, China accounted for 41 percent of all COVID-19 exports globally, the entire European Union 37 percent, and the United States 10 percent. China alone accounts for almost half of the total vaccines going to South America, providing over six times as many vaccines to the continent as the United States. Chinese delivery of COVID-19 vaccines to Africa at the end of 2021 was around 36 million doses less than the United States, according to the World Trade Organization. However, in response to the Omicron outbreak, China, at the end of November, pledged a billion additional doses to Africa, of which 600 million would be free donations, while the other 400 million doses (as much as the entire continent has received thus far from all external sources) would be jointly produced locally in Africa with Chinese technical assistance aimed at promoting African self-sufficiency in the production of COVID-19 vaccines—in what constituted a dramatic instance of South-South solidarity (“WTO-IMF COVID-19 Tracker,” World Trade Organization, accessed December 17, 2021; “China-Africa Friendship Continues to Flourish on Vaccine, Trade, Renewable Energy,” CGTN, November 20, 2021; “‘More Cautious’ China Shifts Africa Approach from Debt to Vaccine Diplomacy,” Guardian, December 8, 2021).

Another extraordinary case of South-South solidarity is Cuba, the only country in Latin American that has developed its own, highly effective vaccines. At the end of December 2021, Cuba had one of the highest levels of vaccination in the world, at 91 percent of its population (84 percent fully vaccinated and 7.3 percent partially vaccinated), exceeded only by the United Arab Emirates. It is now exporting (or licensing out in cooperative agreements) its Abdala and Soberana 02 vaccines to other countries, including Iran, Nicaragua, Venezuela, and Vietnam, raising its annual production capacity to 100 million doses. This is an enormous achievement for a small country faced with a continual, tightening economic blockade enforced by the world’s hegemonic power (Andreas Knobloch, “Cuba Now Exporting COVID Vaccines,” Morning Star, November 29, 2021; “Coronavirus (COVID-19) Vaccinations,” Our World in Data, accessed December 20, 2021).

In August 2021, acclaimed historian Gerald Horne was awarded the American Book Award by the Before Columbus Foundation for his book, The Dawning of the Apocalypse: The Roots of Slavery, White Supremacy, Settler Colonialism, and Capitalism in the Long Sixteenth Century (Monthly Review Press, 2020). Horne is John J. and Rebecca Moores Professor of African-American History at the University of Houston, and the author of more than three dozen books along with more than a hundred scholarly articles and reviews. His other books published by Monthly Review Press include Race to Revolution: The U.S. and Cuba During Slavery and Jim Crow (2014); Confronting Black Jacobins: The United States, the Haitian Revolution, and the Origins of the Dominican Republic (2015); The Apocalypse of Settler Colonialism: The Roots of Slavery, White Supremacy and Capitalism in Seventeenth Century North America and the Caribbean (2018); and Jazz and Justice: Racism and the Political Economy of Music (2019). He is currently working on a book titled The Counterrevolution of 1836. Since 1978, the Before Columbus Foundation, which is dedicated to recognizing the full multicultural diversity of U.S. literature, has given out the American Book Award to authors who in the judgment of a panel of editors, authors, and publishers have provided an “outstanding contribution to American literature.”

Horne’s American Book Award acceptance on December 19, 2021, can be found on the Monthly Review Press web page. In his speech, he thanked the Before Columbus Foundation not only for giving the American Book Award to The Dawning of the Apocalypse, but also for its recognition of “the intellectual tradition from which I sprang,” namely the Black Freedom Movement in the United States. He traced these intellectual roots back to David Walker’s Appeal to the Coloured Citizens of the World (1829), and a century later to W. E. B. Du Bois’s Black Reconstruction (1935). He also acknowledged the pivotal role of Indigenous thought, and particularly the recent work of MR contributor Roxanne Dunbar-Ortiz, author of An Indigenous Peoples’ History of the United States (Beacon, 2015).

The Dawning of the Apocalypse is a wide-ranging and at the same time detailed analysis of the long seventeenth century (in Horne’s case stretching from Columbus’s encounter with the Americas in 1492 to the massive importation of Black enslaved people into what is now the United States in 1607), centering on how slavery and racism constituted the basis of capitalism in Britain and its colonial spawn in the United States. It is concerned with a four-cornered struggle between Europe, Africa, and North and South America. However, the story centers on the rivalry for world power between London and Madrid, and particularly on how this affected the struggles over the Caribbean, Florida, and the early British colonialism in Virginia and elsewhere. Both Madrid and London were engaged in the colonial-capitalist enslavement and genocide of Native Americans, and the slave trade that brought Africans over in ships. Horne’s argument, however, demolishes the already tattered mythology that London’s settler colonialism was somehow more benign than that of Madrid. His central thesis in this regard, which structures much of his book, was that Spain tried to rule in the Americas on the basis of religion, dividing Christians off from heathens, but was unable to stave off the revolts that such a non-essentialist religion-based strategy of domination in some ways reinforced. In contrast, London relied primarily on the essentialist ideology of racism and white supremacy, including the permanent and absolute enslavement and/or extirpation of other “races,” building its world capitalist empire and the Industrial Revolution on that basis.

A. Kent MacDougall, an award-winning mainstream reporter, journalism professor, and longtime MR author died on November 6, 2021, at age 89. Beginning in the early 1960s, MacDougall commenced writing articles for Monthly Review and other radical publications, under various pseudonyms. At the same time, he was working as a top journalist for two of the premier U.S. newspapers: first for the Wall Street Journal (WSJ), and then the Los Angeles Times. He was well known as the author of feature pieces on the front page of the WSJ, and he followed this up after a decade by taking a position as an in-depth reporter at the LA Times. At the WSJ, he wrote articles on I. F. Stone and Marxian economics. At the LA Times, he wrote features on Mother Jones (the periodical), Paul Sweezy, Bertell Ollman, big business, the media, the sales effort under monopoly capitalism, and world deforestation. His reporting at the LA Times won six national awards, including two for a series that resulted in the book Ninety Seconds to Tell It All: Big Business and the News Media (Irwin Professional Publishing, 1981).

In 1988, after twenty-five years working for the bourgeois press, MacDougall, having accepted a position as a tenured professor in journalism at the University of California at Berkeley, was at last able to reveal his full story, which he did in a two-part article entitled “Boring with the Bourgeois Press,” in the November and December 1988 issues of Monthly Review, creating an immediate media sensation. MacDougall was an active participant in the Bay Area Friends of Monthly Review. In his later years, he was deeply concerned with the malignant impact of capitalism on the planet. (For further information, see the obituary that MacDougall wrote for himself and filed five years in advance: “A. Kent MacDougall 1931–2021,” MR Online, December 17, 2021.)

Lukács and the Tragedy of Revolution: Reflections on “Tactics and Ethics”
Confession