Dear Reader, we make this and other articles available for free online to serve those unable to afford or access the print edition of Monthly Review. If you read the magazine online and can afford a print subscription, we hope you will consider purchasing one. Please visit the MR store for subscription options. Thank you very much. —Eds.
by Brazilian popular movements
(Jul 01, 2022)
Topics: Climate Change Ecology Movements Places: Americas Brazil 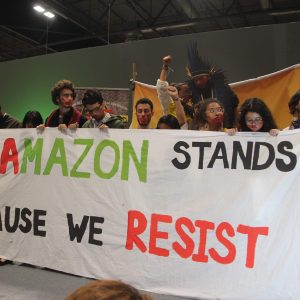 Ray of the year to Indigenous and youth for resistance and uprising #Fossiloftheday #COP25 (December 13, 2019). Credit: John Englart.

This document came out of the dissatisfaction of Brazilian popular movements with the 2021 UN Climate Change Conference in Glasgow.

The measures listed below are a result of collective reflection and decades of popular movements in practice. They will only be effective if we all establish affective ties with and make an ecological commitment to the earth and to nature, understanding ourselves as part of the environment and as responsible for its continuity and regeneration.

End Ecocidal Capitalism or Exterminate Life on Planet Earth: A South African Contribution to Ecosocialist Strategy
We Only Have One Planet—Defending It Will Require Collective Measures