Dear Reader, we make this and other articles available for free online to serve those unable to afford or access the print edition of Monthly Review. If you read the magazine online and can afford a print subscription, we hope you will consider purchasing one. Please visit the MR store for subscription options. Thank you very much. —Eds.
Notes from the Editors
by The Editors
(Jul 01, 2022)
Topics: History Marxism Movements Revolutions Socialism Places: Europe Russia Soviet Union (USSR) 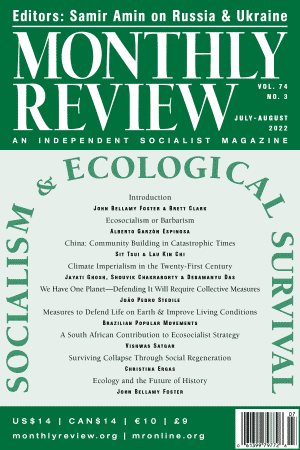 Monthly Review, which has its origin in the early Cold War years (the first issue of the magazine appeared in May 1949), focused to a considerable extent in its initial decades on the superpower contest between the United States, the hegemonic power in the capitalist world system, and the Union of Soviet Socialist Republics (USSR), which had arisen out of the Russian Revolution of 1917. The victorious Chinese Revolution of 1949 represented a further development of a socialist-directed society within the periphery of the capitalist world system; while revolutions, generally associated with decolonization and struggles against neocolonialism, spread across the world in the period after the Second World War—all characterized by attempts to delink from the capitalist world economy. Although Monthly Review came to see the world struggle primarily in terms of third world revolutions, in which the role of the Soviet Union was increasingly marginal, between 1949 and 1980 over a hundred articles in Monthly Review dealt with the Soviet Union directly, with many more than that addressing it indirectly.

Much of this analysis of the USSR was critical, particularly following the Soviet invasion of Hungary in 1956. Monthly Review charted the long decline of Soviet socialism, from its early inception in the Russian Revolution to its effective demise as a new ruling class came into being, dominating the society. Nevertheless, the USSR had broken away from the structure of the dominant world capitalist system and retained some revolutionary traditions, remaining a counter to the U.S.-dominated global economy. This critical historical perspective was presented most definitively in Paul M. Sweezy’s Post-Revolutionary Society (1980).

In the 1980s, Monthly Review explored the growing stagnation of the Soviet economy as well as the policy of perestroika (restructuring) under Mikhail Gorbachev, most notably in a two-part article by Harry Magdoff on “Perestroika” in the March and April 1990 issues of Monthly Review. This was followed by analyses of the dissolution of the Soviet Union in the early 1990s. But, after 1993, treatments of post-Soviet Russia in the magazine largely ceased. The decisive historical event, marking a turning point, was president Boris Yeltsin’s ordering of the shelling of the Russian parliament building in October 1993, killing and wounding more than five hundred people and destroying the power of the Russian parliament. In a phone call from Air Force One on October 5, immediately after Yeltsin’s shelling of the parliament, Clinton told the Russian president (at that time largely a U.S. puppet): “You did everything exactly as you had to and I congratulate you on how you handled it.” (John Helmer, “Naïve Questions About Russia’s War Economy,” Dances with Bears, April 2022; President Clinton, “Telecon with President Boris Yeltsin of Russian Federation,” October 5, 1993 [declassified White House document], available at Clinton Digital Library.)

The brutal destruction of the Russian parliament allowed Yeltsin to push through the new despotic Russian Constitution of 1993, which gave preponderant power to the president, sidelining parliament. The new, highly centralized, despotic political system became the basis of the institutionalization of the Russian corporate oligarchy, which has ruled the country ever since. All of this was done with full U.S. support. The new oligarchs, though connected to former apparatchiks, emerged primarily from the shadow economy, where they had engaged in criminal activities, and which by the mid–1980s constituted about 15 percent of Soviet gross domestic product. Overnight, with the complicity of the Yeltsin regime and active support of the Clinton administration, these business oligarchs were able to seize the commanding heights of the now privatized former Soviet industry and finance—introduced by a process of shock therapy directed from Washington—expropriating much of the wealth of society, in what was nothing but a grand theft. The oligarchs, never numbering more than a hundred or so, set themselves up to carry out a process of continuous pillage, operating as a comprador element in alignment with Western corporate interests. The Russian economy subsequently went into a steep decline, shrinking by close to 50 percent over the course of the decade. The events of 1993 were summed up in Alexander Buzgalin and Andrei Kolganov, Bloody October in Moscow (Monthly Review Press, 1994).

In July–August 1999, Monthly Review published an article by Russian economist Stanislav Menshikov on “Russian Capitalism Today” dealing with the developments over the 1990s. But, otherwise, Monthly Review was mostly silent after 1993 about post-Soviet Russia, which in the Yeltsin years had been virtually colonized by the West. (The magazine’s lack of coverage of Russia in these years was not an oversight, but rather reflected the fact that both the oligarchic control of Russia and its sharp economic and geopolitical decline were abundantly clear, with seemingly no on-the-ground alternatives remaining.) In December 1999, Vladimir Putin, a former KGB officer, became Yeltsin’s successor within the extreme oligarchic structure that was now Russian capitalism. The composition and role of the oligarchy changed slightly under Putin. Nevertheless, the assessment of Menshikov remained accurate: “Russian capitalism is consciously selling its foundations down the river, never doubting that this is the only route to take. There is hardly any analogue of such suicidal behavior in history.”

It was fifteen years before a serious reassessment of Russia was to appear in Monthly Review and Monthly Review Press. This time the analysis was by Samir Amin, writing in the context of the 2014 Maidan coup in Ukraine, engineered by Washington, and the civil war that followed between Kyiv and the Donbass republics of Donetsk and Luhansk, generating a proxy war between the United States/NATO and Russia over Ukraine. Amin reexamined Russia from the standpoint of its long history, going back centuries, thereby placing in a world-system context the aggression being directed against it by the imperial order governed by the triad of the United States/Canada, Europe, and Japan. In such works as “Saving the Unity of Great Britain, Breaking the Unity of Greater Russia” (Monthly Review, December 2014) and Russia and the Long Transition from Capitalism to Socialism (Monthly Review Press, 2016), he provided an insightful analysis of both the contradictions and possible openings in twenty-first-century Russian development.

Amin argued that Russia, given its encirclement by the imperial triad, would increasingly be forced to draw geopolitical red lines, building a Eurasian-based geopolitical alternative, bringing it closer to China. Moreover, if Russia were to succeed in forcefully resisting NATO’s expansion into Ukraine (deciding the fate of Novorossiya in the East and South of present-day Ukraine and Russia’s own national security), it would have to give up its “balancing act”—between external opposition to the triad and an internal regime based on oligarchic rule—under Putin, with its subservient comprador relationship to Western finance. In Amin’s view, there was no immediate possibility of Russia moving from an oligarchic structure to some kind of genuine socialist-directed economy. Rather, he argued that, in the context of the growing world conflict between Russia and the imperial triad, elements of the Russian power elite would gravitate toward a state capitalism with a social dimension, if only for survival, severing the power structure from the corrupt, Western-allied comprador oligarchy, currently ruling the country.

It is this political conflict within the Russian establishment between those favoring a state capitalism and the entrenched oligarchy, which has ruled for the past three decades, as cogently explained by Amin, that is now manifesting itself in Russia in the context of the Ukraine War. This dynamic has been unintentionally helped along by the financial sanctions introduced by Washington, which have had the effect of drastically weakening the Russian oligarchs (John Helmer, “The Russian Revolution of 2022—‘Capitalism in One Country,’” Dances with Bears, April 12, 2022).

The oligarchs, however, have not yet played their last cards, and remain closely linked to Putin’s political regime and the basis of his power. Nevertheless, what is clear is that for the first time in decades there seems to be a serious opposition developing within the Russian state against oligarchic rule and the current regime under Putin, one that is pushing for what could be described as a state capitalist structure (John Helmer, “The Oligarchs Play Their Cards—That’s the Loyalty Card, the Get Out of Jail Free Card, the Rewards Redemption Card,” Dances with Bears, May 30, 2022). Meanwhile, the newly fragmented oligarchy is counting on a Russian defeat and their walking off in the end with the prizes as loyal compradors for foreign capital. (It should be noted that while Washington has sanctioned many of the Russian oligarchs, it has refrained from sanctioning those most closely aligned with its own interests.) It is this complex and entirely unpredictable trajectory, captured by Amin as early as 2014, when the present Ukraine War began (in the civil war between Kyiv and Donbass and the accompanying proxy war between the United States and Russia), which is now the big question concerning the future of Russia. We will be following these developments closely. In our view, the solution to the present geopolitical crisis faced by Russia (and Ukraine) can only be solved by returning to the long path to socialism.

Kathy Boudin, who died on May 1, 2022, was a longtime, valued friend of Monthly Review. Kathy took up the fight for peace, justice, and freedom that emerged in the United States in the late 1960s: in Students for a Democratic Society and the Economic Research and Action Project initiative in Cleveland, and in the Weather Underground. She was sentenced to twenty years to life for her unarmed participation in a politically motivated 1981 robbery. The late Annette Rubinstein, a close friend of Monthly Review, engaged us in her support in prison and in the struggle to obtain her release on parole. From the moment of her release on parole in 2003, Kathy fought tirelessly for women in prison in the United States and became a beloved member of our community. Kathy earned a doctorate from Columbia University Teachers College in 2007; taught at the Columbia School of Social Work; co-founded and co-directed the Center for Justice at Columbia University; and co-founded the Release Aging People in Prison Campaign. Over these decades, she and her immediate family became part of ours. We shall take detailed note of Kathy’s political evolution and legacy in a coming issue.

Ricardo Alarcón De Quesada, who died on May 3 at age 84, was a longtime friend of Monthly Review’s editors and many in Monthly Review’s New York community. As Cuba’s ambassador to the United Nations (where he served a term as vice president of the General Assembly and twice as president of the Security Council), he used his diplomatic status in New York to advance the revolutionary interests of his country while the United States did its best to try to overthrow his country’s socialist government.

Alarcón, who studied philosophy as an undergraduate, was part of the student movement that contributed to the overthrow of the reactionary Fulgencio Batista regime and served in a variety of roles in the Cuban government, ultimately becoming president of Cuba’s parliament. But his MR friends will best remember him for his sharp wit and deep insights into the struggle against imperialism. His contributions to the magazine include: “ALBA: A New Dawn for Latin America” (July 2007); “‘We Will Keep Trying, Unrepentant, Forever’” (March 2008); “The Long March of the Cuban Revolution” (January 2009); and “Cuba: Education and Revolution” (July–August 2011).

Socialism and Ecological Survival: An Introduction
A New Environmental History of Socialist States