Dear Reader, we make this and other articles available for free online to serve those unable to afford or access the print edition of Monthly Review. If you read the magazine online and can afford a print subscription, we hope you will consider purchasing one. Please visit the MR store for subscription options. Thank you very much. —Eds.
Notes from the Editors
by The Editors
(Dec 01, 2022)
Topics: Imperialism Marxism War Places: Americas Asia China Europe Russia United States 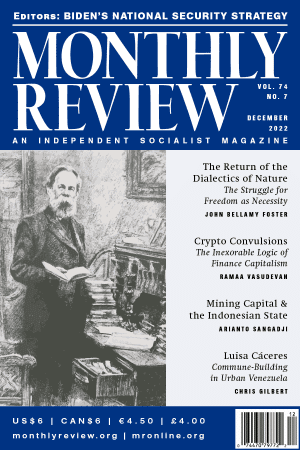 Those MR readers wishing to subscribe to Historical Materialism should send their orders by e-mail to customerservices [at] brill.com. Please make sure to include in your request: Individual subscription to Historical Materialism for either Volume 30 or 31, whether you would like a print edition or e-only, your full mailing address, and the discount code 70997. Prices for 2022 (Volume 30): EUR 79 / USD 96. Prices for 2023 (Volume 31): EUR 83 / USD 101.

In this most recent National Security Strategy for the United States, ideology is thus once again at the forefront, though articulated not in terms of capitalism versus communism, as it was in the Old Cold War, but rather democracy versus autocracy, defining the New Cold War. The leaders of the autocratic camp, as designated by Washington, are the People’s Republic of China (PRC) and Russia, followed by “smaller autocratic powers” such as North Korea, Iran, Venezuela, Cuba, and Nicaragua (11, 41). These nations are accused of either actively carrying out or otherwise supporting war, imperialism, “genocide,” human rights violations, and the disruption of free markets, with the objective of overturning the “rules-based international order” put in place through decades of unrivaled U.S. hegemony over the world economy (8). Established institutions and norms—such as U.S.-dominated military alliances around the globe, the existing oil-price regime, dollar hegemony, and the “force multiplier” of the global financial system represented by the International Monetary Fund and the World Bank—are all under assault (20).

The autocracies are said to have the goal of making “the world safe for aggression and repression.” Meanwhile, Washington, that shining city on the hill, is the leader not only of the world’s formal democracies, but also of all those “other” nations that, although not in any sense democracies, support the U.S.-dominated, rules-based international order and thus are given honorary democratic status (18).

In its 2021 Interim National Security Strategic Guidance, the principal opponent of the United States on the world stage was referred to as China. However, in its 2022 report—under the cover of continued acceptance of the One China policy (which recognizes One China but with two governing systems)—the major U.S. enemy is now characterized throughout the report as the PRC, as opposed to China as a whole (including Taiwan). In this way, the Biden administration is able to underscore its military support of Taiwan while strongly implying that Taipei represents the appropriate governance structure for all of China (a viewpoint hearkening back to former Cold War policy, when “Red China” was the enemy). The new National Security Strategy stresses the “profound differences” that Washington has “with the Chinese Communist Party” and, indeed, its entire “system,” and makes no secret of its burning desire for regime change in the PRC (25).

In Biden’s words, the PRC alone has both “the intention and, increasingly, the capacity to reshape the international order” in ways that go against the U.S.-dominated, rules-based order (3). The new National Security Strategy openly (and falsely) accuses China of “genocide” and of being a would-be international aggressor (24). The PRC, by virtue of its governing system under the Chinese Communist Party, is designated as a “non-market actor” in all of its transactions, promoting “repression at home and coercion abroad,” transgressing accepted economic rules, and “exporting an illiberal model of international order” (3, 8, 14, 34). For the Biden administration, the principal U.S. strategic goal is, then, to “out-compete” China. But the new National Security Strategy makes it clear that this is to be primarily by military means, forcing the PRC to divert its resources in that direction and squeezing it by means of the more than 400 U.S. military bases that almost completely surround it, along with the expansion of the Quad and AUKUS alliances backed by Global NATO. The Biden National Security Strategy thus calls for a further militarization of the Indo-Pacific, and those countries on “the front lines” of “the PRC’s coercion” (23–24; John Pilger, “Atomic Bombings at 75,” Consortium News, August 3, 2020).

The 2022 U.S. National Security Strategy is even more ferocious when it comes to Russia. According to the Congressional Research Office of the U.S. government, Washington has carried out 251 military interventions (not including numerous counterinsurgency operations) on five continents since the demise of the Soviet Union in 1991 (Ben Norton, “U.S. Launched 251 Military Interventions Since 1991, and 469 Since 1798,” Multipolarista, September 13, 2022). Nevertheless, the new National Security Strategy suggests that it is Russia that is at the forefront of “imperialist foreign policy” in the world today. This charge is based on (1) Russia’s military operation, opposite to that of the United States, in Syria; and (2) on Russia’s intervention in Ukraine on its own Western border, in opposition to the U.S. proxy war there (25). In order to bolster its case, Biden’s National Security Council excludes from the report any reference whatsoever to the U.S.-directed Euromaidan coup in Ukraine in 2014, or to the civil war that immediately followed between Kiev (supported by the U.S./NATO) and the Russian-speaking populations in the East and South of the country (supported by Russia). Instead, readers are presented with the fiction that the war started with “Russia’s 2014 invasion of Ukraine.” The report then labels the 2022 war as emanating from “Russia’s further invasion of Ukraine” (25, 36, 39, 44). Not a single sentence is included on direct U.S./NATO involvement in the war or on its role in provoking it, even to the point of excluding any explicit mention of the massive U.S./NATO arms shipments to Ukraine. Nor is there any reference to NATO enlargement since 1997. With this near-complete erasure of history, the charge that the 2022 Russian intervention was “unprovoked” and “imperialist” assumes a fantastic form that should embarrass even the most strident U.S. war hawks.

The 2022 report of Biden’s National Security Council explicitly states that “we do not seek a new Cold War” (9). Yet, the actual document seeks to justify exactly that, while giving impetus to a new nuclear arms race (9). The explicit goal of the new U.S. imperial grand strategy is to defeat both the PRC and Russia by exerting controls over the “external environment” of both, squeezing them from without by means of economic/financial sanctions and growing military pressure (9). The PRC is seen as the bigger threat overall, while Russia has to be crushed first.

With respect to the United States itself, the 2022 National Security Strategy argues for an elimination of the barriers between U.S. foreign/military policy and domestic policy, which need to be “integrated,” effectively militarizing/securitizing the entire society, and particularly the technological and communication sectors (11). The object is to harness the entire country for the New Cold War struggle. Indeed, the National Security Council highlights the need to create a new “defense ecosystem,” which appears to be an all-encompassing Pentagon capitalism conceived as an organic entity with a life of its own (20).

What all of this indicates is that Washington is currently engaged in waging a New Cold War in the twenty-first century, justified as a struggle of democracy against autocracy—one that threatens to be far more dangerous than its twentieth-century counterpart (See John Bellamy Foster, John Ross, and Deborah Veneziale, The United States Is Waging a New Cold War [Tricontinental, September 13, 2022; also forthcoming from Monthly Review Press as Washington’s New Cold War]).

It is scarcely surprising, then, that, at the very moment that the 2022 National Security Strategy was due to be released, Biden was raising before a group of wealthy political donors the specter of nuclear “Armageddon,” arising out of the further escalation of the U.S./NATO proxy war in Ukraine (David North, “Biden Warns: Prepare for Nuclear Armageddon,” World Socialist Website, October 7, 2022). As Marxist philosopher Herbert Marcuse once queried: “Does not the threat of an atomic catastrophe that could wipe out the human race serve to protect the very forces which perpetuate this danger?” (Marcuse, One Dimensional Man [Boston: Beacon, 1964), ix). What is desperately needed in this situation is a massive revival of the global peace movement aimed at steering the world away from exterminism and directed toward the creation of a new society based on substantive equality and ecological sustainability for the sake of the entire chain of human generations. There is no time to wait.

In “Ecological Civilization, Ecological Revolution” in the October 2022 issue of MR, page 7, paragraph 2, lines 6–7 should read: “with the United States responsible for seven times as much per capita of the carbon dioxide concentrated in the atmosphere as China.”

Due to a printing error, the second page of the November 2022 “Notes from the Editors,” found on the inside back cover, was duplicated on the back cover of the issue. Subscribers should be receiving a corrected copy of the magazine in the mail.

The Return of the Dialectics of Nature: The Struggle for Freedom as Necessity
The Witch-Hunting Committees: Never Again!