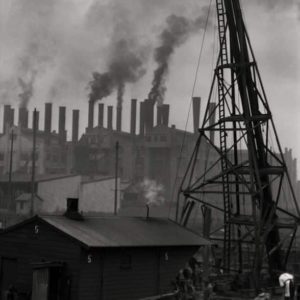 “New Year’s Eve 2019: 5,000 people on the beach at Mallacoota, Victoria, watch pitch-black skies turn a deep red as the bushfire approaches. They huddle, powerless against the fury of this climate change-fuelled nightmare. By March 2020, 33 people, one billion animals, 3,094 houses and over 17 million hectares of land had been destroyed in fires across Australia…

June 2020: Coronavirus, a predictable product of industrial agriculture and deforestation pushing humans into the remaining reservoirs of wildlife, has killed over half a million people as we go to press, and the situation continues to escalate. Experts warn future pandemics are likely to increase in seriousness as environmental destruction worsens.

….The book’s 11 chapters both defend and apply Marx and Engels’ ecological thought. The authors respond to a range of historic and contemporary critiques and provide the reader with an opportunity to engage with Marxist understanding of nature from a number of angles.

Marx saw ecological destruction and that of humanity as intimately linked, as humans are both part of the natural world and rely on it for our survival. Capitalists expropriated the land, through brutal colonisation abroad and enclosures of peasant land in Britain. They ripped humanity from its natural connection with the land by creating private property from nature, and creating alienated human relations with the material world. Capitalism involves ‘the exploitation and squandering of the powers of the earth’, just as it ‘squanders human beings…not only flesh and blood but nerves and brains as well’ (cited on pp46-48). Whereas previously those who worked or lived from the earth were able to replenish it, capitalism introduced a ‘metabolic rift’. Separation of town and country ruptured the historic process of returning nutrients to the soil, and demands on ecological systems increase as the needs of capitalism are imposed on nature.

The scale and consequences of planetary destruction demand that we understand the ecological crisis and its roots. The Robbery of Nature: Capitalism and the ecological rift is a valuable contribution to this end. John Bellamy Foster and Brett Clark argue for a fundamental transformation of society based on workers’ control, and against the false solutions of green capitalism or hyper-technical state capitalism: ‘Ecological Marxism offers an opening up of humanity as a whole to creativity…to rebuild its world on ecological foundations in line with the earth itself’ (p286). The serious application of Marx and Engels’ historical materialism to wide-ranging but interlinked environmental issues makes this analytical volume a rewarding read.

The book’s opening chapters focus on the two equally monstrous pivots of English modern industry – the import of potatoes from Ireland and slave-grown cotton.

Rack renting, the Irish land tenure system named after an instrument of torture, led to soil degradation and monoculture crops, making the country vulnerable to potato blight which struck from 1845-1849. While one million Irish died and a million more emigrated, the British continued the export of grain from Ireland: ‘Ireland was the site of an extreme metabolic rift, caught in the vice grip of economic and ecological imperialism, from which arose the necessity of ‘ruin or revolution’”’ (pp72-77).

The triangular slave trade involved layers of robbery which enriched British capital. Humans were brutally stolen from Africa. Soil fertility, enriched by millennia of care by indigenous custodians, was also looted, exported as cotton fibre thousands of miles to England. The cotton industry rested on a ‘twofold slavery, the indirect slavery of the white man in England and the direct slavery of the black men on the other side of the Atlantic’

Robbery is at the centre of capital accumulation….” 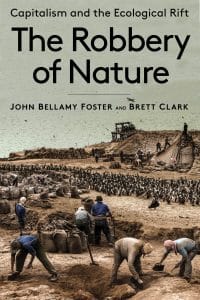 The inseparability of neocolonialism, racism & capitalism: UK’s Morning Star on “The Dawning of the Apocalypse”
New! “Marx, Dead and Alive: Reading ‘Capital’ in Precarious Times”