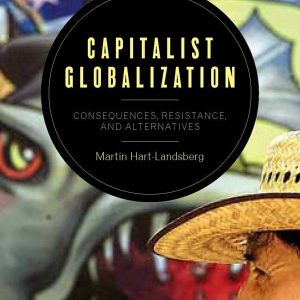 "Hart-Landsberg takes his analysis to the next level ... convincingly demonstrates that a nation-state framework is a distorting lens through which to analyze capitalist globalization."

Conceptualizing globalization as a corporate elite project, not a nationalistic project

Corporate globalization is an international phenomenon by definition that is commonly opposed on nationalist lines. A process embedded in capitalist competition and advanced by the industrialists and financiers who directly benefit from it, however, transcends borders.

Understanding corporate globalization is necessary to developing strategies to effectively counter it, and relying on nationalist arguments is a barrier to grasping the systemic nature of globalization, argues Martin Hart-Landsberg in his just released book Capitalist Globalization: Consequences, Resistance and Alternatives.* All too often, he writes, activists fall back on pointing fingers at China or similar nationalistic talking points, thereby obscuring the true culprits in the global race to the bottom.

By doing so, activists not only erode their potential effectiveness by not prioritizing cross-border alliance building, they drag the spotlight away from the trans-national corporate elite who drive the process.

Fred Magdoff interviewed on Mud and Water Radio
Thoughts on Nelson Mandela by Alan Wieder, author of Ruth First and Joe Slovo in the War against Apartheid