Reviewed by Scott Timcke for Caribbean Quarterly, vol. 64, no.1, 202-204
Reprinted with permission of Taylor & Francis Online

Originally published in 1997, the second edition of Franklin’s Cuba and the U.S. Empire has been released to provide historical depth to the Obama Administration’s efforts to establish diplomatic ties with Cuba. For those unfamiliar with the first edition, Franklin compiled a day-by-day, month-by-month, year-by-year account of Cuba-US relations. Addressed to an American audience, the simply stated chronology traced the various political, social, and economic exchanges between these two states, as well as the imperial dynamic that mediates that relationship. Thankfully so, because Cuba and the U.S. Empire serves as a strong antidote to selective historical amnesia that so often prevails because of American hegemonic rule. The simplicity of the exercise showed the strength of the exercise.

In this new edition, Franklin calls for persons to be a little more circumspect about the motivations for the ‘Cuban Thaw’, as it is known in the US. This is because Cuba-US relations are not simply a product of the Cold War, or a relict thereof; they are a barometer of American imperial politics since the 18th century. And as US imperialism continues to develop, attention to the rapprochement strategy is required, lest one overlook the changing social pacts and geo-political currents to which they are attuned.

Attention of this sort is precisely what Franklin gives in a new commentary that recaps and synthesises Cuba-US relations in the 21st century. She emphasises four recent developments. These are: the politics surrounding the imprisonment and release of the Cuban Five, the sway of Cuban-Americans in US electoral politics, and how torture at Guantanamo Bay provided a template for the operations at Abu Ghraib and innumerable black sites worldwide. Finally, Franklin places considerable emphasis on the contradictions in imperial politics, illustrated by the Helm-Burton act – a mostly symbolic piece of legislation meant to placate Cuban-American property owners, a bloc in US domestic politics – or the Obama Administration keeping Cuba on the state-sponsors of terror list so that Congress couldn’t meddle in his rapprochement agenda.

While subterranean politics around espionage and terror is telling about the less visible aspects of the US-Cuban relationship, the widely publicised Elián González affair in 2000 represents the political sway of conservative Cuban-Americans. Many Cuban-Americans blamed the Clinton Administration for not suspending the rule of law to permit Elián González’s extended family to gain custody as opposed to returning the child to his father in Cuba. Blame and accusations mattered insofar as there was a 537-vote gap between Al Gore and George W. Bush in Florida during the 2000 election. This narrow margin within a context of mass incarceration and the resulting disenfranchisement of African-Americans, means that other demographic groups are less well represented, leading to a situation where Cuban-Americans enjoy disproportionate electoral clout. Moreover, Republicans stoked the Cuban community to protest recounts and so this pressure contributed to the judicial decisions that followed. As such, Cuban-Americans were vital to the election of George W. Bush in 2000.

Nearly twenty years later, however, the sway that Cuban-Americans have in US politics is changing. Demographic shifts have meant that second and third generation Cuban-Americans have less resentment towards the Cuban revolution or legacy attachments to expropriated property, and so their electoral politics are more geared towards domestic issues like home ownership or employment opportunities. The decline of the Reagan-backed Cuban American National Foundation is testament to these developments. That said, given the Trump Administration’s agenda – to the extent that there is one and to the extent that he remains President of the United States – favours landowners and developers, one suspects that Trump will support the reinstatement of legacy property rights, thereby jeopardising rapprochement. And if so, like many Trump ‘policies’, it would be strategically shortsighted.

One notable weakness in Franklin’s account is that she neglects to examine the Cuban willingness to partake in rapprochement. There is no discussion of the country’s creditworthiness, or the lack of internal resources to kick start an economic recovery. That aside, to study imperial politics is to look through a glass darkly. And so it can prove difficult to analyse, given that so much policy and practice remain classified or only partially known. Still, reading the broader historical situations can be helpful for understanding the US rationale for rapprochement. For instance, beginning in around 2000, but building momentum from 2005 onwards, many leftwing governments took power in Latin American states. From Argentina to Venezuela, new socialist governments, Franklin suggests, were in part responses to prolonged Cuban isolationism. The prospect that the US might be losing ideological sway in the Western Hemisphere has prompted the adoption of new foreign policies. And so, rapprochement appears to be less about rectifying historical injustices, and more about seeking to influence regional developments. In sum, Cuba and the U.S. Empire is an essential desktop resource for anyone interested in American foreign policy or the Western Hemisphere, because, as Franklin quite rightly reminds us, “This is a history of imperialism, with its ineluctable imperatives.” (385) 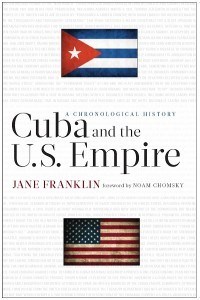