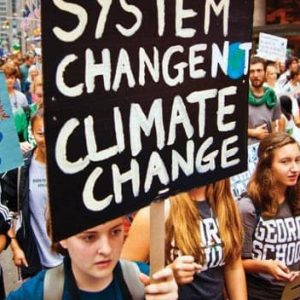 Reviewed by Roger Fletcher for Education for Tomorrow, UK, Spring, No. 133, p. 7

Whether from early years experiments in painting, or from later, more mature experiences in art classes, one thing will most probably be clear to all of us—the result of mixing red and green pigments can only be called ‘sludge’… or, perhaps more prosaically, khaki.

Later, in the adult world, we might have come across the term ‘anaglyph’, either in reference books or in a search engine like Google. It is in this latter sense that Ian Angus gives us this exciting and unusual treatment of a serious global problem, namely the one that Maggie Thatcher implicitly rejected with her myopic and highly misleading comment that ‘there is no alternative’.

At its simplest, an anaglyph is a three-dimensional (stereoscopic) reproduction of the real world, as rendered by a pair of alternate-but slightly-different images. In the late 1950’s, stereoscopic cine films were projected simultaneously through red and green filters, and viewed by an audience through corresponding filters. The effect could be dramatic, and that is the sense in which this Canadian author presents to us an alternative, and updated, view of our world. Thus we learn that a simple technical alteration can turn a disorganised mess (the red/green sludge), into a useful and entertaining technology.

In his Introduction to A Redder Shade of Green, Angus soon nails his colours to the mast with a quotation from Karl Marx. However, what follows are not doctrinaire repetitions from Marx’s work, but some of the most ‘common-sense’ applications of an alternative view of the world, that I have ever had the pleasure of reading, (in my well-over-halfcentury of reading such tracts).

In support of his main thesis, Angus quotes from many contemporary workers in the scientific and philosophic world, but particularly the debates and polemics amongst environmentalists and other specialist writers. He divides the 200-odd pages into five sections, from ‘Natural Science and the Making of Scientific Socialism’ through ‘Responding to the Anthropocene’ and ‘Numbers Are Not Enough’ to the penultimate ‘Saving Species, Saving Oceans’.

So, most immediately for those of us who are concerned with educating the thinkers of tomorrow, this recent ‘little’ book of a mere 200 pages is only ‘little’ in a relative sense; it implies a warning to us to take care when using the diminutive as we attempt to analyse global problems. (For instance, the island of Cuba is often classified as ‘little’—whereas Britain is normally called ‘great’. In actual fact, from end to end, Cuba is closely comparable with the size of Britain, if measured east–to west).

At the turn of the millennium, two very different ‘world-views’ were published, viz Capitalism in Crisis, by Fidel Castro, and The Crisis of Global Capitalism, by George Soros. For a communist and a capitalist to agree so strongly that ‘we are in crisis’ suggests that something is definitely going wrong. Now, a mere 18 years into this new millennium, we have Ian Angus pointing out that, not only is there an economic and social crisis menacing our world, but that it is compounded by perceptual errors involving points of view … and perhaps even colours! Let us try to clarify just what is going on, because it is a tortuous tale; for that, we need to delve a bit into the ‘science’ of socialism.

And so, having surveyed much of the damage that our economic system of capitalism has, and is, wreaking on our planet, Angus has to deal with possible solutions. In the final section of this book he does just that, taking us back to his first section on ‘scientific socialism’ (p13 et seq) and showing that ways out of our global crises are available … provided that we can recognise the seriousness of our plight, and our own responsibility for the current plight of our planet.

Perhaps, as the last chapter of this book suggests, that other island at the opposite end of the Gulf Stream has a viable—and achievable—answer.