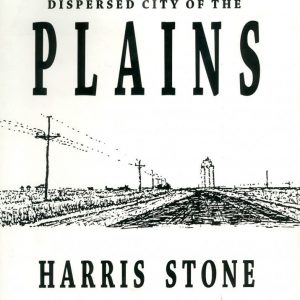 The following is Joan Stone’s Foreword to Dispersed City of the Plains by Harris Stone, his final book, published by Monthly Review Press in 1998. It provides a little context for the book’s creation and insight into Harris’s major aim: examining “the built form of the American city, the built form of monopoly capital.” 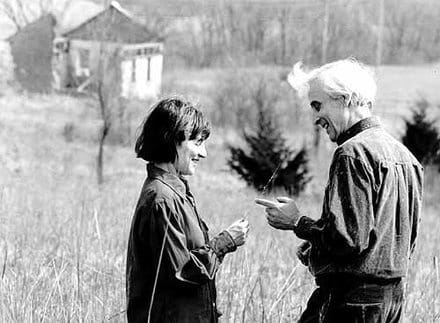 Joan and Harris Stone in Lawrence, Kansas
(photo by Wallace May)

When Harris Stone learned that he had cancer and a limited time to continue his work, chapters one and two of Dispersed City of the Plains had been completed, but only a typed text existed for chapters three and four. He set to work immediately on handwriting and illustrating the remaining text and reached page nineteen of chapter four, before he could no more than lay the groundwork for others to complete the book. I took on the handwriting for the final pages, and J. William Carswell, a colleague in architecture at the University of Kansas, took on the drawings. He decided to make them distinctly different than Harris’s: dots instead of lines, pencil scanned on the computer instead of pen and ink, all the same size, not very large, and set off from the text. Barry Newton, another colleague in architecture, agreed to write the introduction to the book. He and Harris argued out many of the ideas as they worked together on historic preservation projects in Italy and the plains region.

In a letter to the editor of Monthly Review Press, shortly before he died, Harris summarized his thoughts on Dispersed City of the Plains:

Fortunately, before this medical problem came to a head, I had a significant breakthrough in my struggle to penetrate the built forms of this region, which has enabled me to perceive the unique structure of the American city and its implications internationally. The poet Thomas McGrath was right when he observed, “North Dakota is the world.” … The four chapters of this book present the basic argument about the dispersed city of the plains and my hypothesis concerning the built form of the American city, the built form of monopoly capital. My intention was to write an additional chapter that explored the implications of this hypothesis here and abroad (especially in Italy), but the argument is complete without it. Who knows? Others might be inspired by the argument and wish to test the hypothesis themselves.

Most important to Harris and what he would want to be remembered for are his four books, published by Monthly Review Press, which he saw as a single, evolving workbook: Workbook of an Unsuccessful Architect (1973), Monuments and Main Streets (1983), Hands-On, Hands-Off (1991), and Dispersed City of the Plains. They are illuminated manuscripts of our time, a record in text and image of his indomitable, critical, enthusiastic, and imaginative search to penetrate what people have built and what it means.