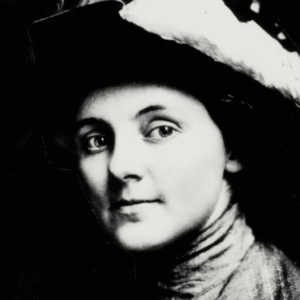 Anna Louise Strong, one of the leaders of Seattle’s 1919 General Strike, and a writer for the Seattle Union Record. (Museum of History & Industry)

Reviewed by Kim Moody for Historical Studies in Industrial Relations

Seattle, Washington – home to billionaires Jeff Bezos of Amazon and Bill Gates of Microsoft; home as well to older contemporary giants of global motion, Boeing and United Parcel Service and, of course, the less crucial but almost as worldwide, Starbucks: a glass-and-steel twenty-first-century metropolis of high-tech late (and latte) capitalism. Yet just over 100 years ago, Seattle’s densely unionized working class ran the city for five days, while its captains of industry, lords of lumber, politicians, and even the Woodrow Wilson administration in Washington DC fumed and tried to provoke violence to no effect. These 50,000 or so union workers distributed milk for children, provided meals for thousands, access to healthcare for those in need, and controlled traffic. In addition, they brought about a long overdue alliance of black, Asian, and white workers in a year that saw violent anti-black ‘race riots’ across much of the country. The strikers also all but eliminated crime in Seattle as unarmed ‘labor guards’ patrolled the streets – a sort of de facto if temporary ‘defund the police’ action by example before anyone thought of that slogan. Nor did the region’s powerful capitalists dare to introduce scabs or replacement workers as they had in so many more conventional strikes. That was the Seattle general strike of 1919.

Labour historian Cal Winslow has brought this experience back to life in a new study of the roots and realities of this unusual American labour struggle. Radical Seattle: The General Strike of 1919 is the first full-scale retelling of this extraordinary piece of working-class history since Harvey O’Connor’s classic memoir, Revolution in Seattle, written over half a century ago.1 As Winslow generously points out, O’Connor’s work is still an ‘indispensable account of the Seattle general strike’, but Radical Seattle brings a new breadth and depth to this inspiring story. While O’Connor brought first-hand experience, Winslow’s account benefits from over half a century of what has been called the ‘New Labour History’ or ‘history from below’, with its transcendence of the older institutional labour history and emphasis on underlying social and political conditions and grassroots actions that shape the events under study.

Winslow studied at Warwick University under E. P. Thompson, the undisputed pioneer in this approach, in the late 1960s and early 1970s. In his Introduction he cites another founder of the new labour history, Herbert Gutman, to the effect that ‘Studying a single event cannot answer the basic questions, not even the general strike … We need the background, of the discontent of working people in the Pacific Northwest as well as of the Seattle social and economic structure’ (p. 14). This Winslow provides in considerable detail. The most striking thing that comes across in Radical Seattle about this heavily immigrant workforce was its irregular employment and its movement around the West from harvest to forest to shipyard. These included women working in the city’s laundries and restaurants, and even some domestic workers. Whatever they produced or provided, Seattle’s workplaces formed a sort of precocious ‘gig’ economy. My own research for Tramps and Trade Union Travelers found this to be the case across America in the decades leading up to this period, where few had permanent jobs, many faced the ‘shape up’, others wandered in search of employment, and railway workers – in the most powerful and professionally run industry of the era – worked an average of only 147 days a year.2 And, yet, in Seattle these workers formed strong unions and waged successful strikes leading up to the general strike in February 1919….

….And so it seems that in Seattle for a time they did things differently, long before the likes of Amazon, Microsoft or Starbucks came to symbolize that city. Still there is something familiar in the underpaid, underemployed, precarious workers who organized powerful unions and ran a city for five days. They do not seem that different from those who move in and out of Amazon warehouses and whose revolt appears to have started in the Deep South and Great Plains, or the delivery workers and Uber drivers in city after city fighting for recognition. Or, for that matter, the teachers, Teamsters, and autoworkers now fighting to change their unions into militant, democratic organizations that the Seattle strikers would have recognized. This era’s pandemic has changed attitudes among those who now understand just how ‘essential’ and ‘frontline’ they are. In 1919, Seattle workers had already learnt that from the many struggles they had waged in the years leading up to the general strike, an experience that Winslow brings to life. Then, too, in the last few years America has seen socialist organization flourish as it has not for generations, with the Democratic Socialists of America numbering over 90,000 members and growing. The past may, indeed, be a foreign country, but Radical Seattle has a lot to say to today’s political, social-movement, and labour activists.

See Historical Studies in Industrial Relations for the full review.