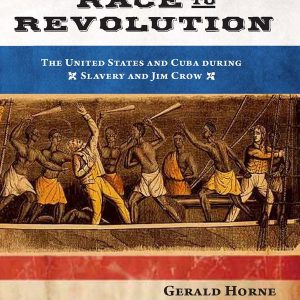 "Path-breaking ... Their story is our story, and thanks to Horne, we can now study its flow in a single, and profound, narrative."

Race to Revolution: The U.S. and Cuba during Slavery and Jim Crow

Presented as a project of People’s World Friday Night

“Pathbreaking … Their story is our story, and thanks to Horne, we can now study its flow in a single, and profound, narrative.”

“Gerald Horne is one of our most original historians.”

“Horne is in the forefront of historians laboring to revise the entire story of the Americas until the broken pieces are mended.”

“A very much welcome and important contribution to the scholarship on the workings of trans-national systems.”

The histories of Cuba and the United States are tightly intertwined and have been for at least two centuries. In Race to Revolution, historian Gerald Horne examines a critical relationship between the two countries by tracing out the interconnections among slavery, Jim Crow, and revolution. Slavery was central to the economic and political trajectories of Cuba and the United States, both in terms of each nation’s internal political and economic development and in the interactions between the small Caribbean island and the Colossus of the North.

Horne draws a direct link between the black experiences in two very different countries and follows that connection through changing periods of resistance and revolutionary upheaval. Black Cubans were crucial to Cuba’s initial independence, and the relative freedom they achieved helped bring down Jim Crow in the United States, reinforcing radical politics within the black communities of both nations. This in turn helped to create the conditions that gave rise to the Cuban Revolution which, in 1959, shook the United States to its core.

Gerald Horne is John and Rebecca Moores Professor of African-American History at the University of Houston. He is the author of more than two dozen books, including The Counter-Revolution of 1776, Negro Comrades of the Crown, Mau Mau in Harlem?, From the Barrel of a Gun, and Class Struggle in Hollywood, 1930-1950.

"Capitalism Towards an Uncertain Future": An Interview with Ernesto Screpanti
Gerald Horne interviewed on Democracy Now!