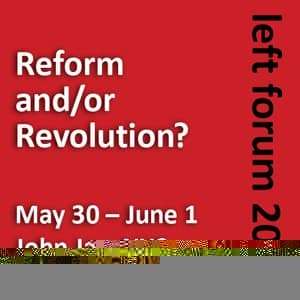 Join Monthly Review and many others from around the world at this year’s Left Forum conference at John Jay College, the City University of New York, May 30 to June 1.

Left Forum is the largest annual gathering of left activists and scholars in the United States. This year’s theme is “Reform and/or Revolution: Imagine a World of Transformative Justice.” Please see below for more information on MR-sponsored and related panels, and don’t forget to visit the Monthly Review Press table for discounts on a wide range of MR Press titles, new and old!

Panels featuring Steve Early, author of Save Our Unions

Lessons of the Verizon Strike: Can Telecom Labor Rise Again? with Steve Early, Dom Renda (CWA Local 1105), Pat Fahy (IBEW Local 827), Justin Harrison (CWA Local 13000), Amy Muldoon (CWA Local 1106). Co-Chairs: Steve Early and Rand Wilson. In 2011, 45,000 members of the Communications Workers of America (CWA) and the International Brotherhood of Electrical Workers (IBEW) employed by Verizon in eight states and the District of Columbia staged a two-week work stoppage to resist contract concessions. This strike was the second largest anywhere in the country in the last decade, and ended without a settlement. The session will describe recent trends in the telecom industry that make effective strikes more difficult, the challenge of organizing the unorganized at Verizon Wireless (and other non-union firms), and strategies and tactics that might make future IBEW-CWA contract campaigns more effective.

Labour and the International, Part 2: Now with Tony Daley (Communications Workers of America), Hester Eisenstein (Queens College, New York), Steve Early (author of Civil Wars in U.S. Labor and Embedded with Organized Labor), George Comninel (York University, Toronto), Babak Amini (York University, Toronto). The 150th anniversary of the birth of the International Workingmen’s Association (IWA) (1864‐2014) offers an important opportunity for more profound examination of its legacies that directly speak to our present condition. A comparison between present current mainstream paradigms and the political platform developed by the IWA may help to advance this quest for new solutions to the impasse.

Global Unions, Local Power: Can Labor Win Against Multinational Companies? with Steve Early, Jamie McCallum (Middlebury College), and Ashwini Sukthankar (UNITE-HERE, New York City). This session will examine several major global union campaigns directed at winning recognition agreements from multi-national employers: UNITE-HERE, the Service Employees International Union (and its European, Indian, and South African partners in the struggle to expand union membership within global security firms), and the decade-long collaboration between the Communications Workers of America and its German counterpart, ver.di, at German-owned T-Mobile. It will also examine the lessons of the UAW’s recent NLRB election defeat at Volkswagen in Chattanooga, a cross-border campaign assisted by IG Metall, the German metal workers union.

Registering Class in 21st Century Socialist Strategy Greg Albo (Chair, York University), Arun Gupta (Indypendent magazine), Bryan Palmer (Trent University), and Vivek Chibber (New York University). In his landmark essay on “Reform and Revolution” in the 1968 Socialist Register, Andre Gorz wrote that “the power to initiate a policy of reforms is not conquered in Parliament, but by the new dynamic of struggle that a new relation of forces makes possible.” This calls today for a sharpened conceptual apparatus to apprehend the changing composition of both capitalist and working classes in recent decades. This panel brings together three of the authors in the 2014 Socialist Register to discuss this.

Registering Reform and Revolution: 50 Years of The Socialist Register with Leo Panitch (Chair, York University), David Harvey (CUNY Grad Center), Zillah Eisenstein (Ithaca College), Barbara Epstein (UC Santa Cruz), and Bhaskar Sunkara (Jacobin Magazine). The Socialist Register has long been what Mike Davis once described as “the intellectual lodestone for the international left.” The theme of this year’s Left Forum has been the central concern of Register since it was founded by Ralph Miliband in 1964; indeed the 1968 volume featured Andre’s Gorz famous essay, “Reform and Revolution,” where the concept of structural reforms was first introduced. This panel bring together a highly distinguished roster of of socialist intellectuals to discuss the Register‘s five decade long contribution to reform and revolution, and where to go with it today.

Hugo Chávez: His Legacy in Food Sovereignty and the Construction of Eco-Socialism in Venezuela with Magdeline Ureña (Chair, Alberto Lovera Bolivarian Circle of NY), Fred Magdoff, Cesar Aponte, Williams Camacaro (Bolivarian Circle Alberto Lovera NY). In 1999, Venezuela became among the first countries in the world to officially adopt “food sovereignty” into state policy, with its newly reformed constitution guaranteeing all citizens the right to food through a sustainable domestic food system. This was a radical commitment for a country that had largely abandoned its agricultural sector and where 90% of the population had already moved out of the countryside and into urban areas. Still, food continues to be a highly political matter in Venezuela, with continued manufactured food shortages by the opposition and persisting tensions, even within the chavista base, regarding scale and model of agricultural production and issues such as GMOs. In the face of these challenges, some are calling for Venezuela’s food sovereignty efforts to be grounded in eco-socialism, entailing new social relationships around food and with the Earth.

The Ecosocialist Solution to the Environmental Crisis with Ashley Smith (Chair, International Socialist Review), Hadas Thier (International Socialist Organization), Fred Magdoff, and Chris Williams (System Change Not Climate Change). The capitalist system is causing catastrophic environmental crisis. Its relentless drive for growth and profit lies behind everything from mountain top removal to global warming. Workers, people of color, and indigenous populations bear the principal burden of these disasters. Ecosocialists not only identify the roots of the problems, but also argue that workers and the oppressed have the interest and capacity to transform the current system into a new socialist society that puts people and the environment before profit.

The Venezuelan Revolution and Climate Change with Isolina De La Cruz (Chair, Alberto Lovera Bolivarian Circle NY), Fred Magdoff, Cesar Aponte, and Brian Tokar. Among the many legacies of Hugo Chávez was the mandate in Venezuela’s Plan de la Patria, the country’s national plan for 2013-2019, “to contribute to the preservation of life on the planet and the salvation of humankind.” To advance this goal, Venezuela has been pioneering numerous revolutionary policies and programs aimed at curbing emissions and mitigating global climate change. At the same time, contradictions persist in the face of what continues to be an economy highly based on petroleum. This workshop will explore the Venezuelan revolution vis-à-vis climate change, looking at both the advances and setbacks of Venezuela and its partners in the ALBA countries. It will also look at an upcoming international climate summit in Venezuela as an opportunity to radically shape new climate strategies in Venezuela and globally in the face of escalating climate chaos.

Socialism or Barbarism: Mészáros and the Current Crisis with Irving Kurki (essential discussions), David Holmquist (Researcher and Activist), and Anne Pomeroy (Associate Professor of Philosophy at Richard Stockton College). This panel, drawing on the work of István Mészáros, will demonstrate the way in which capitalist productive activity produces real reification: a movement in degrees away from the being of the human towards the being of things. This ontological degradation is the fundamental barbarism of capitalism. The movement toward socialism requires, therefore, a counter-movement toward the genuinely human through an appropriation of free capacity to carry forth a re-vision and re-construction of species being.

Labor Vs. Education Deform with Betty Yu (Chair, Center for Media Justice), Kevin Prosen (MORE [Movement of Rank and File Educators]), John Antush (MORE), Jennifer Wager (Essex County College), Dan Clawson (Educators for a Democratic Union, UMass Amherst Sociology). At the heart of the corporate education reform movement — what many in education have come to call “ed deform” — is a Taylorist drive to control and degrade teachers’ labor. Organizing in schools as workplaces is therefore a centerpiece of fighting for an overhaul of the educational system in the interests of students, teachers and school communities.

And don’t miss the Dollars & Sense 40th Anniversary Party, co-hosted by the Department of Economics Faculty, John Jay College of Criminal Justice-CUNY, on Saturday, May 31, at Gossip Bar and Restaurant (733 Ninth Avenue, between 49th and 50th St). Doors open at 8 pm, food and drinks will be available for purchase. Please make a donation today to honor Dollars & Sense‘s 40th anniversary!