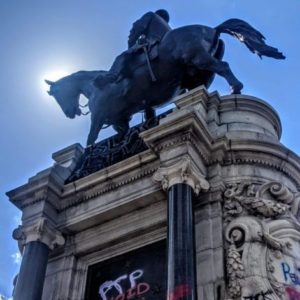 “…race, pan-Europeanism, fundamentally…was a way to reconcile those who had been warring on the shores of Europe, English versus Irish, English versus Scots, British versus German, German versus Russian, Russian versus Pole, Serb versus Croat, northern Italian versus southern Italian….All of a sudden, when they crossed the Atlantic–in a maneuver that would make the Madison Avenue advertising industry blush–they’re rebranded as ‘White’ quote unquote. A sort of ‘identity politics’–as the U.S. left likes to say when they try to disparage black politics, interestingly enough, cruelly enough, for that matter–and that proves to be the winning ticket, this construction of whiteness, a new identity politics, a monetized and militarized identity politics which involved class collaboration” with the great “real estate speculators” of the time, many of whom are heralded as America’s “Founding Fathers.”

I get sort of worked up when I think about all these myths….Our friends on the left keep telling us that 1776 was a great leap forward for humanity. Well, it reminds me of an apocryphal cartoon with an African in chains, and the caption reads:

The good news is I was part of a great leap forward for humanity. The bad news is that I was enslaved.

…It’s no accident, as historians like to say, that the Founding Father George Washington was a grand real estate speculator, just like the 45th U.S. President Donald Trump was a grand real estate speculator. This whole project could be seen as one gigantic speculative real estate play…you have this massive land grab of Native American land, and then Mexican American land, and then to work that land, you continually kidnap Africans and drag them kicking and screaming across the Atlantic to work for free.”

To hear the rest of the interview with author Gerald Horne, listen below or head to Lay Led Unions.