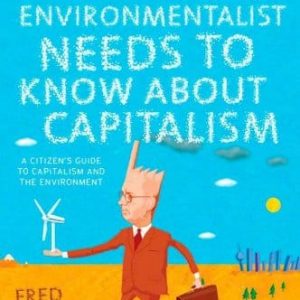 What Every Environmentalist Needs to Know About Capitalism

There is a growing consensus that the planet is heading toward environmental catastrophe: climate change, ocean acidification, ozone depletion, global freshwater use, loss of biodiversity, and chemical pollution all threaten our future unless we act. What is less clear is how humanity should respond. The contemporary environmental movement is the site of many competing plans and prescriptions, and composed of a diverse set of actors, from militant activists to corporate chief executives.

This short, readable book is a sharply argued manifesto for those environmentalists who reject schemes of “green capitalism” or piecemeal reform. Environmental and economic scholars Magdoff and Foster contend that the struggle to reverse ecological degradation requires a firm grasp of economic reality. Going further, they argue that efforts to reform capitalism along environmental lines or rely solely on new technology to avert catastrophe misses the point. The main cause of the looming environmental disaster is the driving logic of the system itself, and those in power—no matter how “green”—are incapable of making the changes that are necessary.

What Every Environmentalist Needs To Know about Capitalism tackles the two largest issues of our time, the ecological crisis and the faltering capitalist economy, in a way that is thorough, accessible, and sure to provoke debate in the environmental movement.

As we journey through the early stages of the end of the industrial mind an ecological world view awaits us on the horizon. We have no map, but rather a wildly oscillating compass needle. These two bold grown-ups, old hands at hard thinking, are steadying the needle. This book properly pondered will reveal that capitalism is the product of abstract thought whose particularity is to propel us to the edge of humanity’s version of a Petri dish.

With the debate about environmental collapse so dominated by technological, population, and market-based solutions, this book is a powerful antidote. Only by addressing global capitalism can we hope to avert catastrophe. Magdoff and Foster have written an up-to-date, accessible, and comprehensive account of a grim situation, yet manage to inspire the reader with their call for an ‘ecological revolution,’ already in process in parts of the world. An essential book for classroom use, to give to friends who need to learn more about what’s happening to the planet, or for the nightstand as a continual reminder of what’s really important.

—Juliet Schor, author, True Wealth: How and Why Millions of Americans are Creating a Time-Rich, Ecologically-Light, Small-Scale, High-Satisfaction Economy

A superb introduction to an essential conversation about capitalism’s ability to coexist with environmental progress. Magdoff and Foster do an excellent job of addressing the important issues at stake in this debate.

Fred Magdoff is professor emeritus of plant and soil science at the University of Vermont. His most recent books include Agriculture and Food in Crisis (edited with Brian Tokar), The ABCs of the Economic Crisis (with Michael Yates), and The Great Financial Crisis (with John Bellamy Foster). John Bellamy Foster is editor of Monthly Review. He is professor of sociology at the University of Oregon and author of The Ecological Revolution, The Great Financial Crisis (with Fred Magdoff), Critique of Intelligent Design (with Brett Clark and Richard York), Ecology Against Capitalism, Marx’s Ecology, and The Vulnerable Planet.